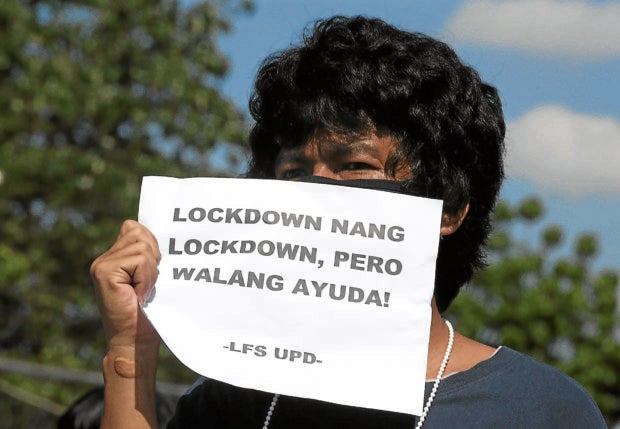 Activists, like health workers, on Sunday, March 28, 2021, raise the issue of aid for Metro Manila dwellers during the weeklong reimposition of enhanced community quarantine. The government promised to deliver assistance for those unable to work. — INQUIRER/NIÑO JESUS ORBETA

MANILA, Philippines — The P22.9 billion worth of assistance for residents in the NCR Plus will be released to local government units (LGUs) starting on Monday, according to the Department of the Interior and Local Government (DILG).

Interior Undersecretary Bernardo Florece, DILG officer-in-charge, answered in the affirmative when asked to confirm this information.

“Yes, starting tomorrow, the BTr (Bureau of Treasury) will release it directly to the concerned LGUs,” he told INQUIRER.net in a text message.

“Yes. Per advice of the DBM (Department of Budget and Management) to us,” Malaya said.

In an interview with DZBB, Malaya said he expects that the LGUs would start distributing the aid to their constituents by Tuesday or Wednesday.

The DILG earlier ordered LGUs to issue an executive order (EO) detailing the manner of aid distribution to their constituents.

The department said LGUs must release the aid “15 calendars days upon receipt of the funds if the assistance is in cash or within 30 calendar days if assistance is in-kind.”

Some 22.9 million beneficiaries in the NCR Plus, which covers Metro Manila, Bulacan, Rizal, Cavite and Laguna, are expected to receive at least P1,000 worth of assistance each, either in cash or in-kind. However, no family must be given more than P4,000.

The Department of Social Welfare and Development earlier assured that LGUs affected by the enhanced community quarantine (ECQ) will get a list of aid beneficiaries.

The ECQ in the NCR Plus started on March 29 and was supposed to end on April 4, but was later extended for another week or until April 11.