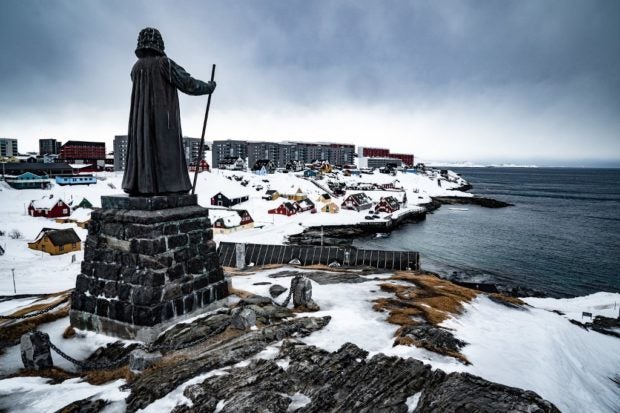 The statue of the Danish-Norwegian Lutheran missionary Hans Egede in Nuuk, Greenland, is pictured on March 30, 2021, days before parliamentary elections. The autonomous Danish territory of Greenland votes on April 6, 2021 in legislative elections, wrapping up a campaign focused on a disputed mining project as the Arctic island confronts firsthand the effects of global warming. Photo by Emil Helms / Ritzau Scanpix / AFP

NUUK, Denmark — Greenland votes Tuesday in legislative elections largely seen as a referendum on a controversial mining project that would help diversify the Arctic island’s economy as it plans for a future altered by global warming.

The autonomous Danish territory obtained ownership of its vast mineral reserves in 2009 when its self-rule powers were widened.

Those resources, its geopolitical relevance and easier access due to melting sea ice have made Greenland increasingly attractive to the world’s superpowers in recent years. Donald Trump, when he was US president, even offered to buy the island in 2019.

While Denmark and Greenland made it abundantly clear the territory was not for sale, Nuuk is nonetheless keen to attract foreign investments to help it cut its financial umbilical cord to Copenhagen someday.

A rare earth and uranium mining project proposed by an Australian company and backed by Chinese investors in the south of the island in Kuannersuit could provide a massive windfall that would supplement Greenland’s main industry, fishing.

But in February, a political crisis erupted when a junior party quit the coalition government over the project, leading to Tuesday’s early elections for parliament’s 31 seats.

Social democratic Siumut, Greenland’s largest party, has dominated island politics since autonomy in 1979. Currently trailing in the polls, it backs the mine project.

“We have to say no to the mine and allow ourselves to develop our country our own way,” Mariane Paviasen, an IA member of parliament and leader of the anti-mine charge, told AFP.

“In Greenland we have clean air and unspoiled nature. We live in harmony with nature and we aren’t going to pollute it.”

A resident of Narsaq, the village of 1,500 inhabitants where the mine would operate for 37 years if approved, she has been fighting for eight years to block the mine’s permit.

In 2010, Australian company Greenland Minerals obtained an exploration license for the Kuannersuit deposit, considered one of the world’s richest in uranium and rare earth minerals — a group of 17 metals used as components in high-tech devices such as smartphones, flat screen displays, electric cars and weapons.

The company’s environmental protection plan was recently approved but authorities still need to greenlight the project before an operating license can be issued.

But opponents say the mine, located in the island’s only agricultural region, would deprive locals of their farmland and hunting grounds. They argue it reeks of colonialism in a region already coping with the devastating effects of climate change.

“People in Narsaq… feel they will have to leave,” Greenlandic political scientist Nauja Bianco told AFP.

“The question then is how to legitimize the shutdown of the settlement. It’s reminiscent of colonial times.”

For Birger Poppel, a University of Greenland expert on Arctic development, the mine is in any case “not a quick fix” for Greenland’s financial independence.

Nuuk relies on annual Danish subsidies of around 526 million euros ($620 million), representing a third of its national budget.

The mine could boost the island’s budget by 1.5 billion Danish kroner ($235 million, 200 million euros) according to Greenland Minerals. But that would reduce Denmark’s annual subsidies by half that amount due to a revenue-sharing deal with Copenhagen, which is not opposed to Greenland’s dream of independence.

Other sectors that could be developed to help finance that dream are tourism, agriculture, and the export of sand and natural fertilizers, according to Mikaa Mered, professor of geopolitics at the Paris Institute of Political Studies.

For now, fishing makes up most of the local economy and 90 percent of exports.

That industry is prospering, benefitting from climate change as fish stocks diversify in the warmer waters.

He’s not hoping for any major changes from the election — “just bigger quotas in the Nuuk fjord” — and says climate change hasn’t affected his life much.

But the same cannot be said for the many hunters in Greenland’s small coastal villages, as retreating sea ice shortens the season when they can head out on the ice with dogsleds to hunt.

The Arctic has been warming at twice the rate of the rest of the world since the 1990s. And yet, Greenland has not signed the Paris climate agreement. IA has vowed to do so if it comes to power.

While opinion polls credit IA with 36 percent of voter support compared to 23 percent for Siumut, pollsters warn that the outcome remains uncertain.

Voting stations open at 1100 GMT and close at 2200 GMT, with the results expected early Wednesday.