Authorities intercept P13.6-M worth of ‘shabu’ in Bulacan ops 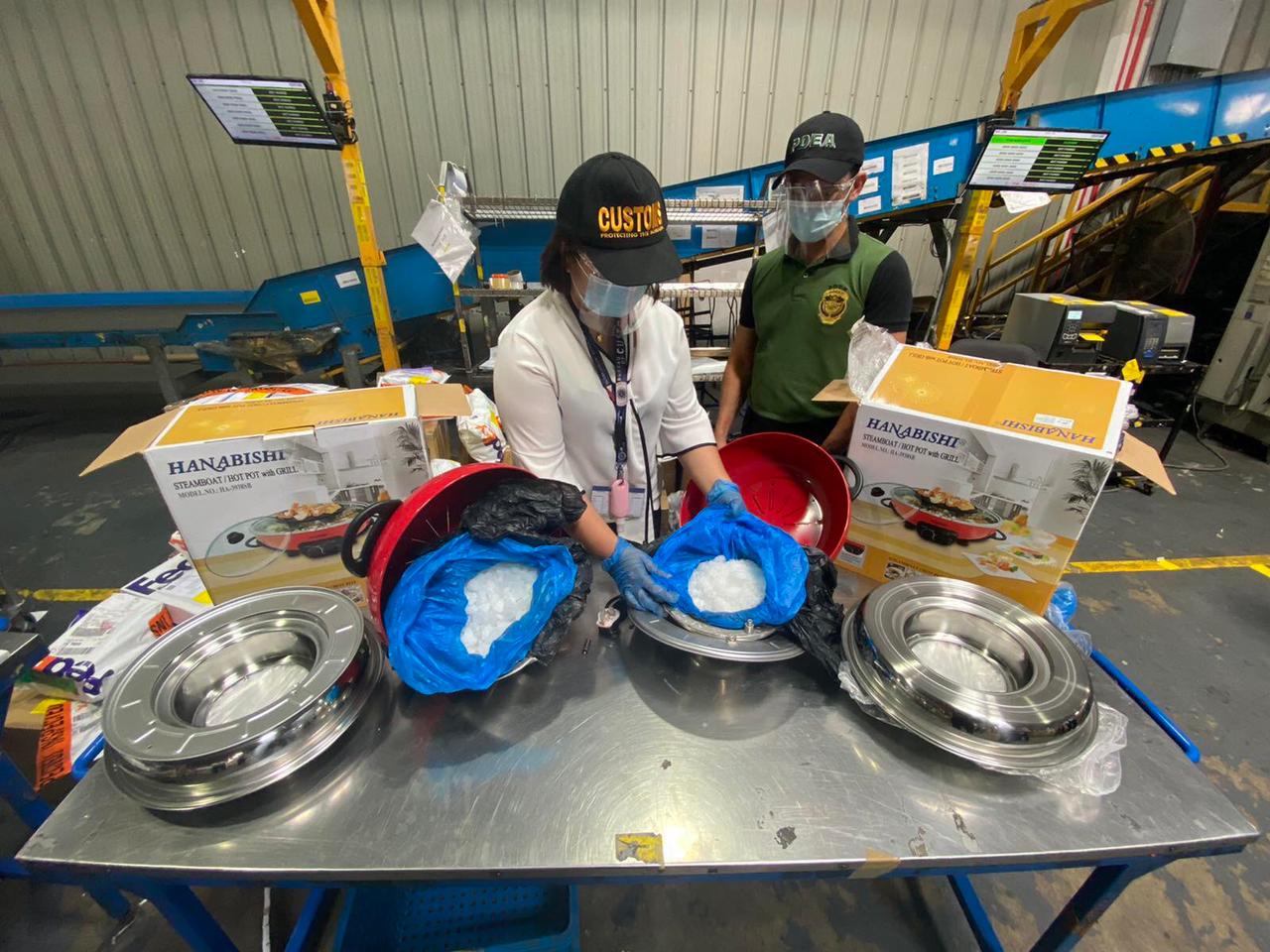 Personnel of the Bureau of Customs (BOC) and the Philippine Drug Enforcement Agency (PDEA) inspect the P13.6-million worth of shabu intercepted through a controlled delivery operation in Bulacan on Friday, March 5, 2021. Photo from BOC

According to the BOC, the claimant of the illegal drugs was also apprehended during the operation launched by the Bureau of Customs-Ninoy Aquino International Airport (BOC-Naia), BOC Quick Response Team, Philippine Drug Enforcement Agency Region III and Naia Inter-Agency Drug Interdiction Task Group.

The BOC said that the consignee, a certain Jayson Quiloy, claimed the package that contained 2,003 grams of methamphetamine hydrochloride concealed inside two hotpot grills.

The bureau said the package, declared as “Kitchen Appliances – steamboat grill,” arrived last February 16, at the Port of Naia and was shipped by “Glus Sdn Bhd. (MBE Sri Gombak)” from Malaysia.

The BOC said in a statement that the illegal drugs were initially discovered during an x-ray inspection, which showed an “irregular image.” Personnel of the Naia Customs then conducted physical examination of the package. The PDEA Chemical Laboratory Analysis later confirmed that the seized white crystalline substance is shabu.

According to BOC, a claimant of a package containing ecstasy was also arrested by authorities at the Manila Central Post Office in an operation on February 15.

The claimant and the illegal drugs are now in the custody of the PDEA. Authorities are investigating the claimant for violation of the Comprehensive Dangerous Drugs Act in relation to Section 118 (prohibited importation), Section 1113 (goods liable for seizure and forfeiture) and Section 1401 (unlawful importation) of the Customs Modernization and Tariff Act. Liezelle Soriano Roy, INQUIRER.net trainee

Over 2800 pieces of ecstacy seized from parcel claimant in Manila

Read Next
SWS: 31% of families with distance learners have weak internet connection
EDITORS' PICK
Smart three-peats as country’s fastest mobile network – Ookla
Would the military allow me to stay this long if I’m inutile? – Duterte
In good spirits: SMDC helps farmers and residents through Kadiwa Market
Pre-order the new vivo Y20s [G] to get a free TWS earphone
65% of Filipinos say Duterte’s health should be made public – SWS
DSWD chief admits ‘slow start’ in distribution of aid in ‘NCR Plus’
MOST READ
Vico Sotto frets getting photos of ‘butt vaccination’ from Pasig dwellers
Metro Manila to have shortened curfew hours from 8 p.m. to 5 a.m. under MECQ
San Miguel Corp. continues to invest heavily in the Philippines’ future
COVID-hit Roque slams ‘un-Christian’ query on how fast he secured hospital bed
Don't miss out on the latest news and information.