Over 2,800 pieces of ecstasy worth P4.89M seized from parcel claimant in Manila 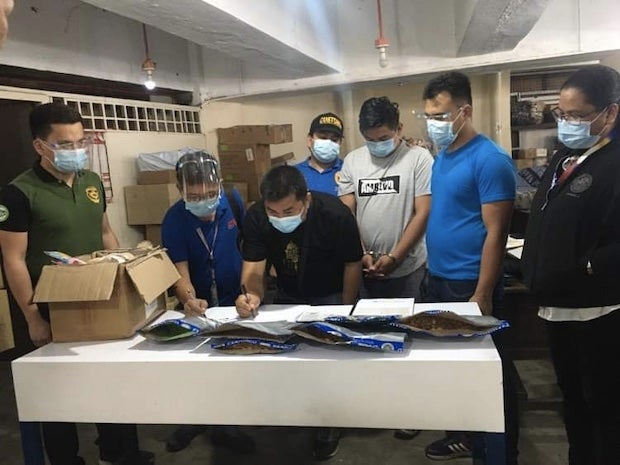 PDEA agents conduct an inventory of the evidence seized from the suspect. (Photo from PDEA)

MANILA, Philippines — A parcel containing 2,878 pieces of the illegal drug ecstasy was seized from a man who tried to claim it from the Philpost Manila Central Office, the Philippine Drug Enforcement Agency (PDEA) said on Monday.

The arrest was made by a team composed of operatives from PDEA and the NAIA Inter-Agency Drug Interdiction Task Group (NAIA-IADITG).

The suspect was identified as RonRon Salonga, a resident of Port Area in Manila.

PDEA estimated the 2,878 pieces of ecstasy to have a street value of P4.892 million.

Ecstasy was originally a brand name of drug but has been generalized to refer to methylenedioxy-methylamphetamine (MDMA), according to the European Monitoring Centre for Drugs and Drug Addiction.

In a separate statement, the Bureau of Customs (BOC), one of the agencies in the NAIA-IADITG, said the shipment containing the party drugs was declared as women and children’s clothing and shoes and was sent from the Netherlands by a certain Mary Lumbao Edward.

It was “consigned to a certain resident of Malate, Manila,” the BOC said.

“Upon further profiling and examination of the NAIA Customs examiner and K-9 sweeping, it was discovered that 12 packs of ecstasy tablets with green and gold colors were concealed inside the walls of the box/packaging. Chemical lab analysis from PDEA showed positive for ecstasy,” the BOC added.

PDEA said agents obtained other pieces of evidence including a cellular phone; several identification cards from the Philippine Health Insurance Corp. (PhilHealth), the Bureau of Internal Revenue, and private firms; an authorization letter and a photocopy of the authorizing entity’s alleged ID; a parcel delivery notice; a sales invoice; a signature record from the courier service; and a black clipboard.

The suspect was placed under the custody of the PDEA. He will face charges for importing dangerous drugs, in violation of the Comprehensive Dangerous Drugs Act of 2002 and the Customs Modernization and Tariff Act.