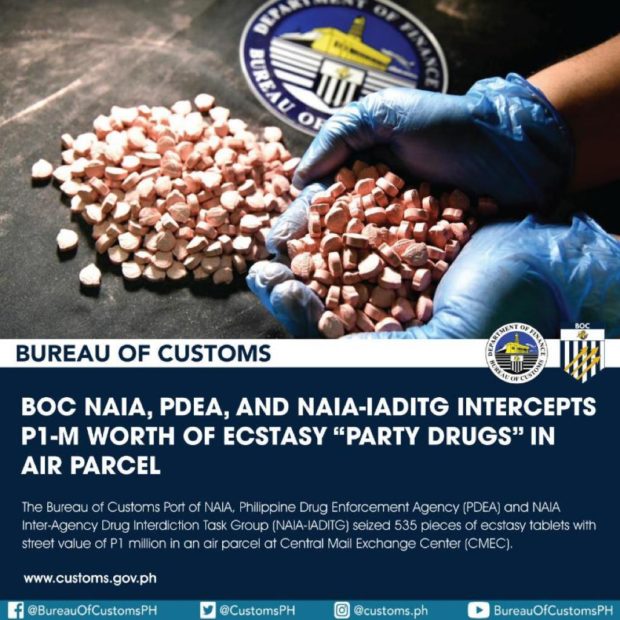 The seized tablets were initially discovered by Customs personnel at CMEC during the 100% physical examination of the air parcel.

Subsequent laboratory test conducted by the PDEA confirmed the tablets as Ecstasy or “party drugs.” Records further show that subject air parcel came from the Netherlands and was misdeclared as “documents.”

The 535 pieces of ecstasy tablets were turned over on January 7, 2021, to PDEA for further investigation and possible prosecution of individuals involved in the illegal importation for violation of the Comprehensive Dangerous Drugs Act of 2002 (RA No. 9165) and Section 1401 Customs Modernization and Tariff Act (RA No. 10863).

A total of 23,482 ecstasy tablets worth P42.27 million were seized by BOC Naia together with PDEA and NAIA-IADIGT for the year 2020.

BOC Naia is in full support to Customs Commissioner Rey Leonardo B. Guerrero’s anti-smuggling campaign, as the BOC will remain vigilant against smuggling attempts to illegally import unregistered medicines and other prohibited, restricted and regulated goods without proper clearances from concerned agency/office, aside from dangerous goods.

For 2020, the BOC condemned all unregistered medicines and pharmaceuticals which arrived into the country without importation permits.

For BOC Naia alone, 373.19 tons of unsafe and other hazardous goods including unregistered medicines and pharmaceuticals without Food & Drug Administration permits and clearances were condemned and destroyed in Trece Martires, Cavite.

Read Next
AFP, citing its data, says civilian property destroyed in 532 NPA attacks since 2010
EDITORS' PICK
Smart three-peats as country’s fastest mobile network – Ookla
Would the military allow me to stay this long if I’m inutile? – Duterte
In good spirits: SMDC helps farmers and residents through Kadiwa Market
Pre-order the new vivo Y20s [G] to get a free TWS earphone
65% of Filipinos say Duterte’s health should be made public – SWS
DSWD chief admits ‘slow start’ in distribution of aid in ‘NCR Plus’
MOST READ
Vico Sotto frets getting photos of ‘butt vaccination’ from Pasig dwellers
Metro Manila to have shortened curfew hours from 8 p.m. to 5 a.m. under MECQ
San Miguel Corp. continues to invest heavily in the Philippines’ future
COVID-hit Roque slams ‘un-Christian’ query on how fast he secured hospital bed
Don't miss out on the latest news and information.