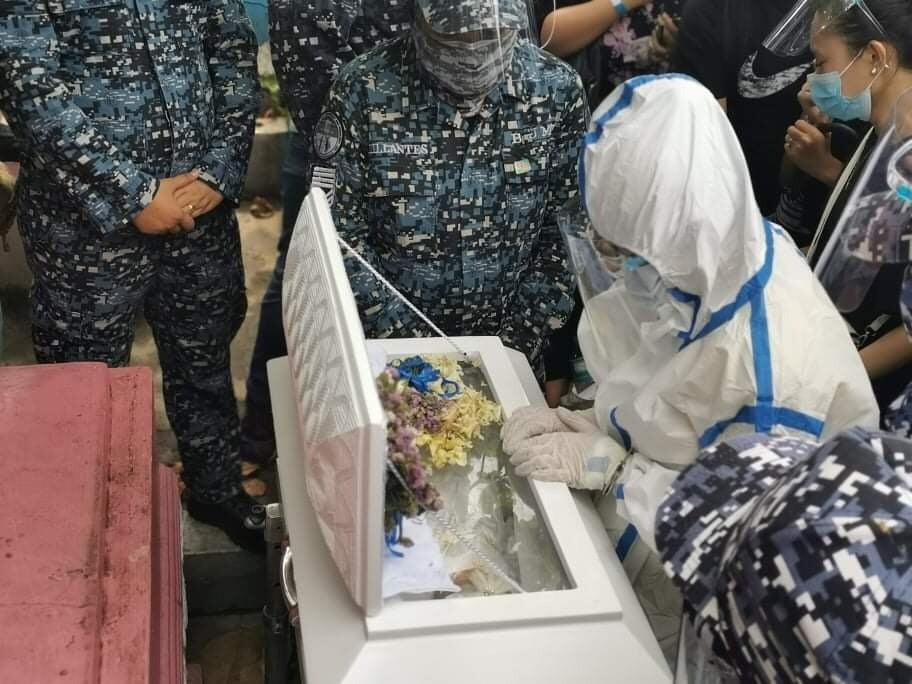 MANILA, Philippines — The camp of political prisoner Reina Mae Nasino has filed various complaints against officials from the Philippine National Police (PNP) and the Bureau of Jail Management and Penology (BJMP) for the alleged abuses she experienced before and during the wake and burial of her daughter.

In the 69-page complaint submitted by Nasino’s mother Marites Asis with the help of the National Union of People’s Lawyers (NUPL) before the Office of the Ombudsman on Wednesday, criminal charges for supposedly violating sections of Republic Act No. 9745 or the Anti-Torture Act and other rights protecting inmates were filed against 23 named personalities from the BJMP and PNP.

They are also facing administrative complaints of grave misconduct, conduct prejudicial to the best interest of the service, and grave abuse of authority.

According to Nasino’s lawyers, the cases were for the maltreatment that Nasino got while she was incarcerated, the injustice done to River, and the events that unfolded leading up to the infant’s death and funeral.

The charges aim to hold to account these police and jail officers for gross violations of RA 9745 or the Anti-Torture Act, grave coercion, violations of the rights of persons detained under RA 7438, maltreatment of prisoners, grave misconduct, conduct prejudicial to the best interest of the service, and oppression/grave abuse of authority,” the lawyers said in a statement.

“The subtext of our legal submissions is that hers is a case of patent abuse of authority by the state — of a negotiated procurement of defective search warrants; of a crackdown not on crime, but on legitimate dissent; of an oft recycled charge of illegal possession of firearms and explosives lodged against activists filed not on the basis of fact and evidence, but on the convenience of the unavailability of posting bail as a matter of right,” they added.

Nasino was arrested last November 2019 after a series of raids in the activist organization’s offices in Metro Manila and Negros Island.  She faced charges of illegal possession of firearms and explosives.

But while under detention, she discovered that she was pregnant.  Despite this, she was not allowed to let her newborn daughter stay with her either inside or outside the detention facility, amid the threat of the COVID-19 pandemic.

When River was brought to the intensive care unit of the Philippine General Hospital, Nasino’s lawyers tried a last attempt to reunite mother and child as the infant’s health quickly deteriorated.  But it was not acted upon by the court.

After River’s death, her lawyers sought for furlough that would allow Nasino to grieve with her relatives.  It was allowed but was reduced to a few hours of visit.

The controversies did not end there as River’s burial was allegedly hijacked by police officers manning the area, leaving mourners including Asis behind.  Several groups believe that these actions of the government were tantamount to abusing the rights even of prisoners.

Nasino believes that the actions of the law enforcement agencies were an overkill — contrary to claims by then PNP chief Gen. Camilo Cascolan that the police officers were just doing their jobs.

“Without authority, respondent police officers prohibited my family from proceeding with the funeral march according to plan such that my mother had to beg on her knees before respondents Rara and Vergara for their permission,” Nasino said.

“Worse, respondent police officers snatched away my baby’s remains during the funeral procession. At the Manila North Cemetery, police officers whom my family did not authorize to touch baby River’s coffin carried it brusquely to the burial lot like they were handling bricks,” she added.=

But aside from the criminal and administrative cases, Nasino filed additional charges for violating R.A. 10028 or the Expanded Breastfeeding Promotion Act of 2009 against Iral and Monteron after they supposedly denied River access to breastmilk by preventing them access to a nursing facility.

“Clearly, respondents Iral and Monteron ignored and contravened their own Policy, which was verily adopted by the BJMP in order to be compliant with the mandate of RA 10028,” Nasino said.