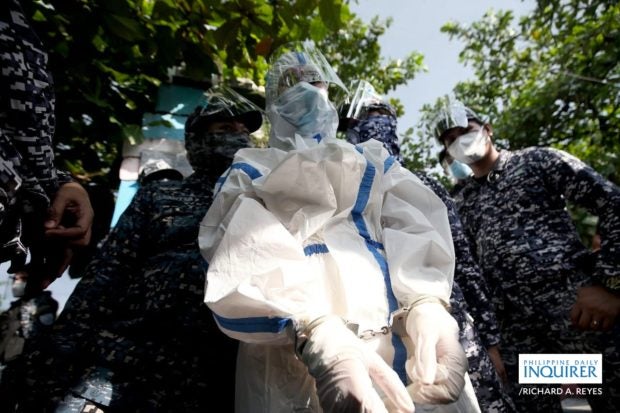 MANILA, Philippines — An international rights group has warned the Philippine government that its alleged maltreatment of political prisoner Reina Mae Nasino and her daughter violated various international standards on prisoners and children.

According to the International Coalition for Human Rights in the Philippines (ICHRP) and its other chapters worldwide, the international standards on how women and children should be treated were violated when Nasino was separated from her daughter River, and when she was not allowed to see the three-month-old baby when it got sick.

River died last October 9, due to respiratory complications, but groups believe that had the court allowed Nasino to be with her daughter under a temporary freedom scheme, the death could have been avoided.

The ICHRP noted that Article 3 of the Convention on the Rights of the Child — which the country is a state party — says that “the baby’s best interest shall be the primary consideration in all actions concerning children, whether undertaken by public or private social welfare institutions, administrative authorities, legislative bodies, or courts of law.”

“The treatment of Reina Mae Nasino and her Baby River from the State has violated international standards of treatment of prisoners and children,” ICHRP’s chapter in British Columbia, Canada said.

Controversy followed the government’s treatment of Nasino during the burial of her daughter, which activist groups said was “hijacked” after police asked the hearse to move ahead and leave behind the mourners.

Nasino was one of the several activists arrested during the search operations of various non-government organizations’ offices in 2019.  When Nasino was nabbed for illegal possession of firearms and explosives, she did not know that she was already one month pregnant.

She then gave birth to River last July.  Her requests, either to be freed temporarily or to allow River to stay inside the Manila City Jail so that she could take care of her, were not granted by the court.

Nasino’s case then garnered attention after her camp tried to plead with the court to allow her to visit her sick child, who displayed COVID-19 symptoms.  Hours before River died at the intensive care unit of the Philippine General Hospital, Nasino’s bid was not acted upon.

Sister Patricia Fox, the Australian missionary who was deported under President Rodrigo Duterte’s administration, said that the treatment of Nasino appears that the legal right for furlough can only be afforded to powerful individuals.

“A legal right intended for prisoners but the Duterte government deemed it as privilege only to be given to its allies and powerful elite,” Fox, spokesperson of the Asia Pacific Coalition for Human Rights in the Philippines, said in a statement.

Kapatid, a group of political prisoners’ relatives, noted that the reduction of the furlough and the overall denial of the court to give Nasino a chance to tend for her daughter is ironic — especially since former presidents Gloria Macapagal-Arroyo and Joseph Estrada, were both granted furlough during their detention.

Arroyo was placed under hospital arrest in 2011 due to an electoral fraud case, while Estrada faced plunder charges and was convicted during Arroyo’s term.

Kapatid also recently slammed the supposedly too long quarantine period for Nasino, 21 days instead of the normally prescribed 14 days, being equivalent to a “bartolina” or solitary confinement punishments.

“We note the politics of selective accommodation and the blatant disregard for the principle of justice,” ICHRP-British Columbia said.

“Individuals and groups who committed crimes against the people are exempted from prosecution and accountability while the poor and those working on social justice issues are arrested and kept in jail on trumped-up charges,” it added.

De Lima appeals Ombudsman’s dismissal of her case vs Guevarra