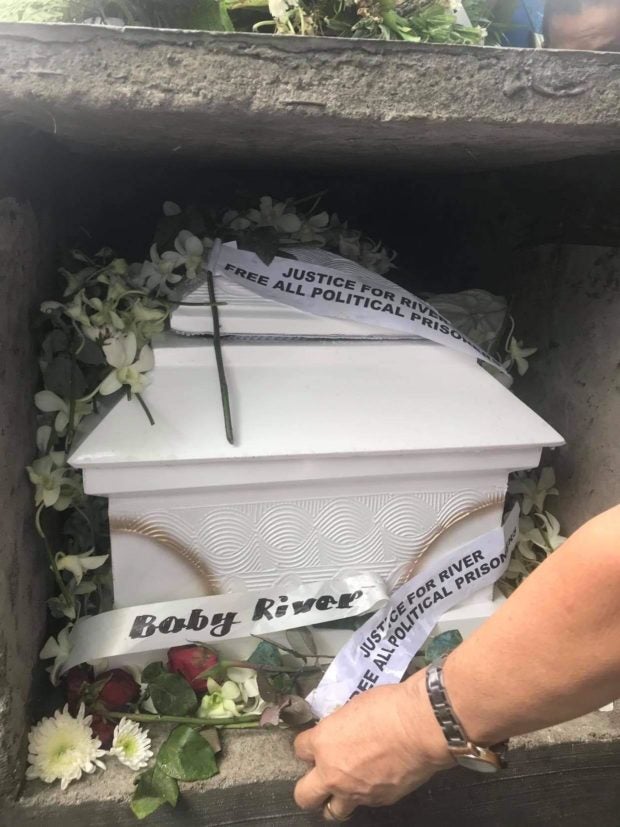 MANILA, Philippines — It should have been a day of grieving as Baby River was brought to her final resting place, but the occasion was overshadowed by the strong presence of prison guards and lawmen tasked to provide security for political detainee-mom, Reina Mae Nasino.

Baby River was buried at 3PM Friday at the Manila North Cemetery, a week after she died due to gastroenteritis complications at the Philippine General Hospital.

Rights group Kapatid lamented that prior to the burial, elements of the Manila Police District (MPD) allegedly “hijacked” the funeral by delaying the burial rites. At one point, the group said some 20 lawmen guarding La Funeraria Rey in Pandacan, Manila, where the baby’s wake was held, reportedly slowed down the release of River’s remains.

“They wanted to bring the baby down only at 1 p.m. because that’s the time the police said the blessing in church would happen,” read the statement from Kapatid, an organization of families and friends of political detainees.

The group said the funeral parlor opted to heed police, not the Nasino family.

The coffin was then finally brought outside and placed at the funeral car, which suddenly sped off at 12 noon, thereby ruining plans of the family to conduct a funeral march and bring the casket to the Supreme Court or Court of Appeals.

“Nagmura mga kasama sa likuran as we were all forced to run behind. But we couldn’t catch up. Nagkahiwalay,” read the statement.

(Some were cursing as we were all forced to run behind. But we couldn’t catch up. We were separated.)

The vehicle carrying River’s coffin was also seen being guarded by dozens of police officers at the cemetery.

LOOK: The hearse carrying Baby River at the Manila North Cemetery as police lines up outside. @inquirerdotnet Photos and Videos from Kapatid pic.twitter.com/hKTva8EM3q

Handcuffed ’til the final moments with Baby River

At the cemetery, detainee-mom Nasino, who was in handcuffs and clad in full personal protective equipment, took a last long look at her daughter hours before laying the baby to rest.

Lawyers and Nasino’s mom, Marites Asis were appealing to take off the handcuffs to at least allow Nasino to wipe her tears and grieve properly. 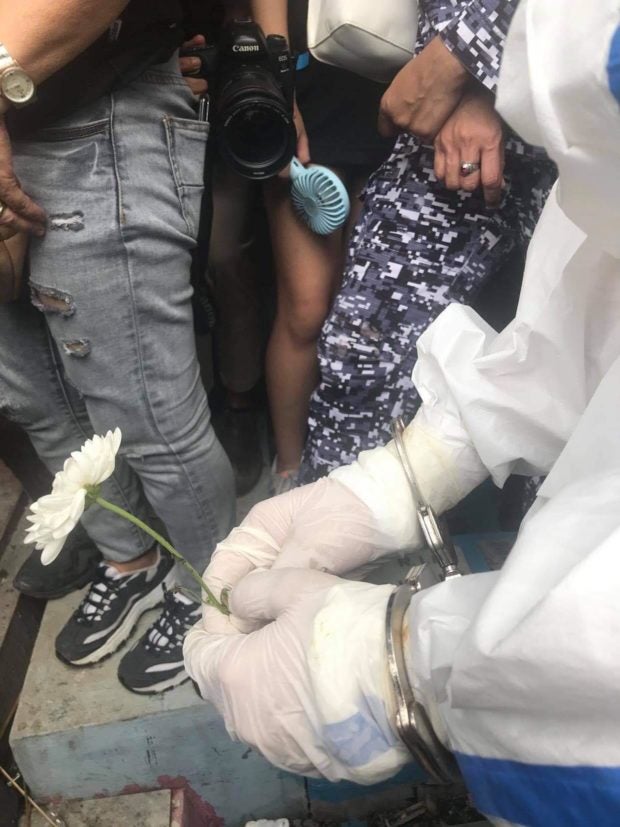 (How can she wipe her tears when both her hands are handcuffed?)

WATCH: Lawyers and Marites, mother of Reina Mae appeals to remove her handcuff so she can hug her daughter. @inquirerdotnet Video from Kapatid pic.twitter.com/57eReB4ac4

After the tension, the bereaved activist, still breaking into tears, delivers her final message to her daughter.

(I have many memories with you. I will be released, we will all be free. We are not alone. Our sorrows may be quick but let’s be ready. We will get through this.)

‘More men in uniform than family’

More than the emotional struggle of the mother to see her daughter being laid to rest, it was the policemen and personnel of the Bureau of Jail Management and Penology (BJMP) that aroused attention, especially as their sheer number exceeded that of the deceased’s relatives and attendees. 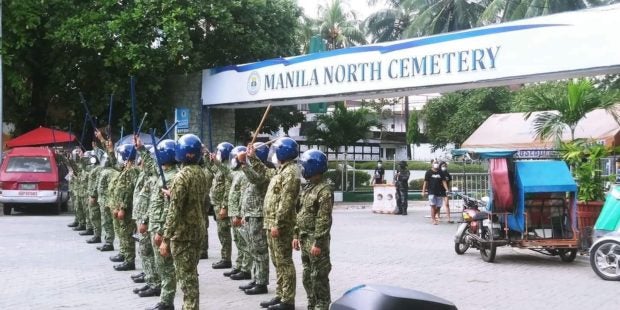 “There were more men in uniform than family and friends. They know this because they planned it this way. The priest asked the police forces to remove the handcuffs so ReinaMae could spread her hands to embrace the coffin. But nothing,” Kapatid said.

The group said around 50 prison guards and police personnel alone were escorts of Nasino, who was believed to be detained over “trumped up” charges.

BJMP spokesman Jail Chief Inspector Xavier Solda said around 43 personnel were sent to secure Nasino at her final moments with her baby.

“Considering the expands of the area, around 43 personnel from different jail units including PNP personnel were deployed there in compliance with the orders of the court to secure PDL Nasino and to ensure na rin na walang any untoward incident sa lugar (to ensure that there are no untoward incidents in the area),” Solda said in a text message.