Some areas in Albay may be uninhabitable after lahar flow, says Robredo 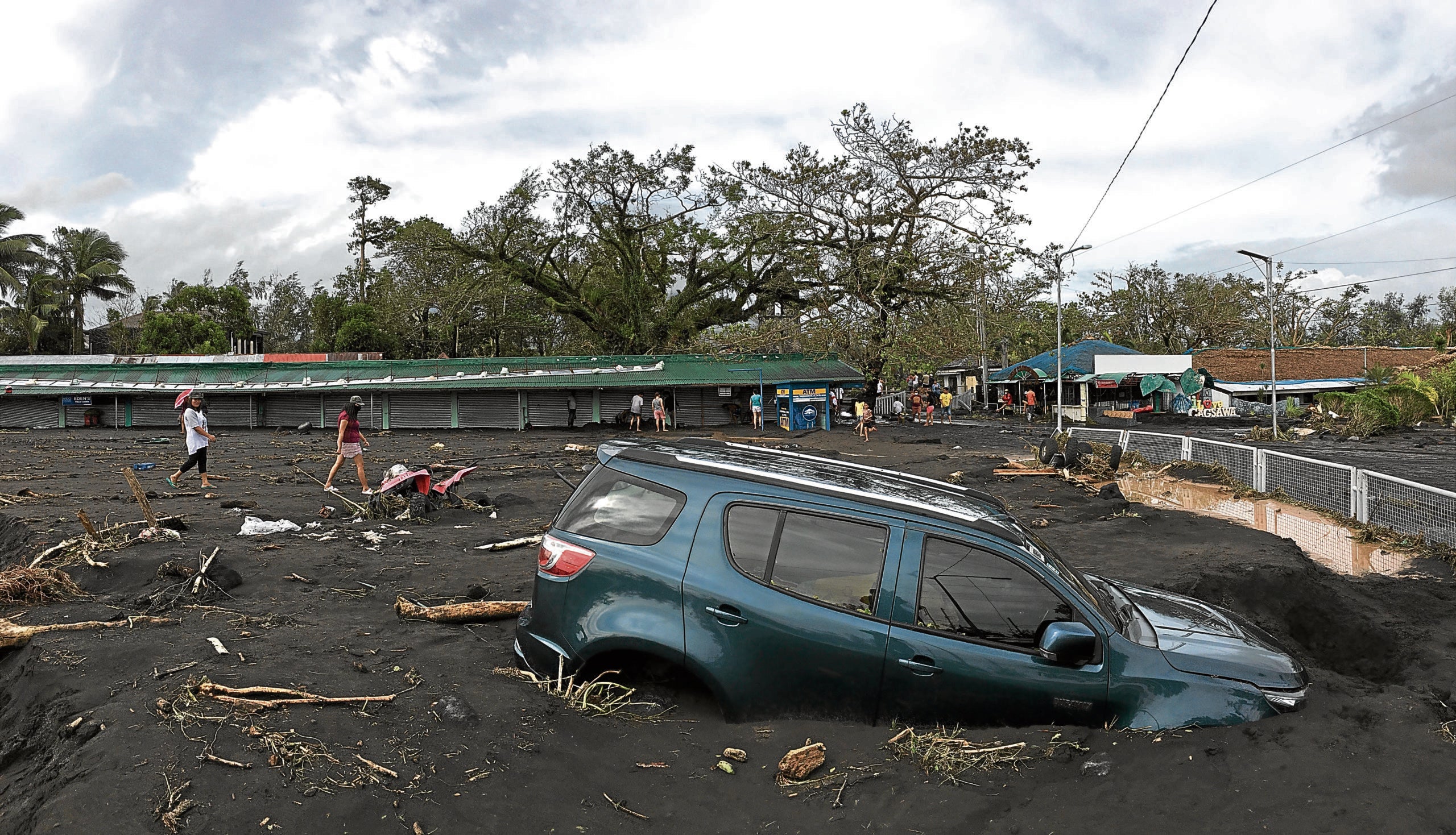 RUINED A sport utility vehicle and business establishments are submerged in lahar at the parking lot of Cagsawa Ruins in Barangay Busay, Daraga town, Albay province, after Typhoon “Rolly” sent mud and boulders tumbling down the slope of Mt. Mayon on Sunday. —GEORGE GIO BRONDIAL

MANILA, Philippines — There are areas in Albay province — especially in Guinobatan town — that may no longer be habitable after the onslaught of Super Typhoon Rolly, Vice President Leni Robredo said on Sunday.

According to Robredo, the lahar flow that affected Guinobatan was so immense, that people could have been killed had they refused to evacuate.

Over 200 homes were buried in the lahar flow that came from Mayon Volcano and was washed away by Rolly’s rain and wind when it hit the Bicol Region last November 1.

(The lahar flow in Guinobatan is severe.  The range of areas affected is so wide, with almost 300 houses, around 200-plus houses were buried.)

(If only you can see it, it’s like a no man’s land, the rocks driven are huge.  It may no longer be habitable.  There is a creek that was also affected, while a new creek sprung out.)

Robredo, who visited hard-hit areas in Bicol last week to provide aid and to assess the damage, said residents did not expect the the lahar flow as the mud from the volcano took a different route.

She added that this recent lahar flow that affected Guinobatan was on a route that was last observed in the 1960s — which took some residents by surprise as they initially thought they would not be hit.

(The lahar flow took a different route, not the one it usually moves through.  People said that the last time lahar flowed in this route was back in the 1960s.  They didn’t expect it to move there, but it’s a good thing the local government unit enforced a forced evacuation.)

(Because if not, a lot of people will die.  The news that reached us is that officials said people who died are the ones who insisted on staying in their homes.  Those who sought shelter in safer areas were saved.)

Rolly packed maximum sustained winds over 200 kilometers per hour as it slammed into the provinces of Albay and Catanduanes.

Data from the Philippine National Police places the death toll at 25, with 21 coming from Bicol alone.

READ: Damage to infrastructure, agriculture due to typhoon Rolly rises to P11B

Read Next
NegOcc mayor, 4 others contract COVID-19
EDITORS' PICK
DOH: 28,471 new COVID-19 cases in PH; active cases now 284,458
On Day 2 of implementation, gov’t says workers now exempt from ‘no vax, no ride’ policy
Over 3 Million worth of prizes to be won at Smart Padala’s SENDali Manalo Promo!
Acer starts the year off strong with the Aspire Vero National Geographic Edition
Metro Manila posts lowest temperature yet this ‘amihan’ season at 19°C
Gear up and get ready to play with Yamaha Mio Gear
MOST READ
Derek Ramsay on being married to Ellen Adarna: ‘Gumaan ‘yung mundo ko’
Emma Stone calls Andrew Garfield a ‘jerk’ after he ‘lied’ about his ‘Spider-Man: No Way Home’ appearance
Lucky plants to grow in 2022
Retirements prompting major reshuffle in PH military
Don't miss out on the latest news and information.