Damage to infrastructure, agriculture due to typhoon Rolly rises to P11B | Inquirer News

Damage to infrastructure, agriculture due to typhoon Rolly rises to P11B 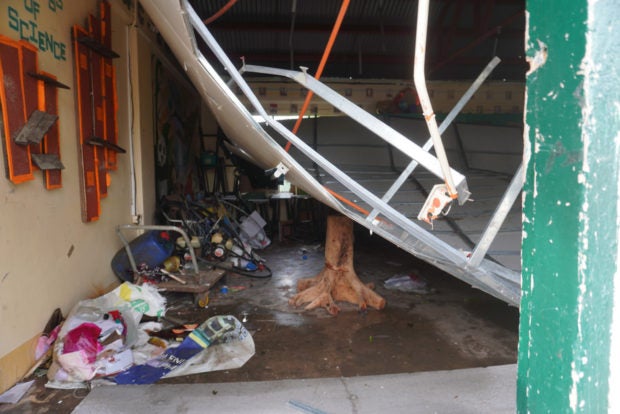 This photo shows the damage at Sabang National High School in Calabanga, Camarines Sur, on Monday, Nov. 2, 2020, following the onslaught of Super Typhoon Rolly. According to barangay officials, several classrooms were damaged during the wrath of the typhoon while evacuees were staying there. Photo from the office of Vice President Leni Robredo

MANILA, Philippines — Super Typhoon Rolly, tagged as the world’s strongest storm this year, has caused over P11 billion in damages to infrastructure and agriculture, the National Disaster Risk Reduction and Management Council (NDRRMC) said in its report released Thursday.

Based on the report of NDRRMC, the damages caused by the typhoon to infrastructure is already pegged at P8.4 billion. For the agriculture sector, the figure is marked at P2.9 billion.

Here is the breakdown of Rolly’s damage to infrastructure per region:

Damage of the typhoon to the agriculture sector per region is as follows:

Meanwhile, a total of 230,834 families or 906,146 persons in 3,586 barangays have been affected by “Rolly.” A total of 44,033 houses were damaged in Bicol Region, Mimaropa, and Cordillera Administrative Region.

NDRRMC earlier said there 20 fatalities recorded due to the strong typhoon.