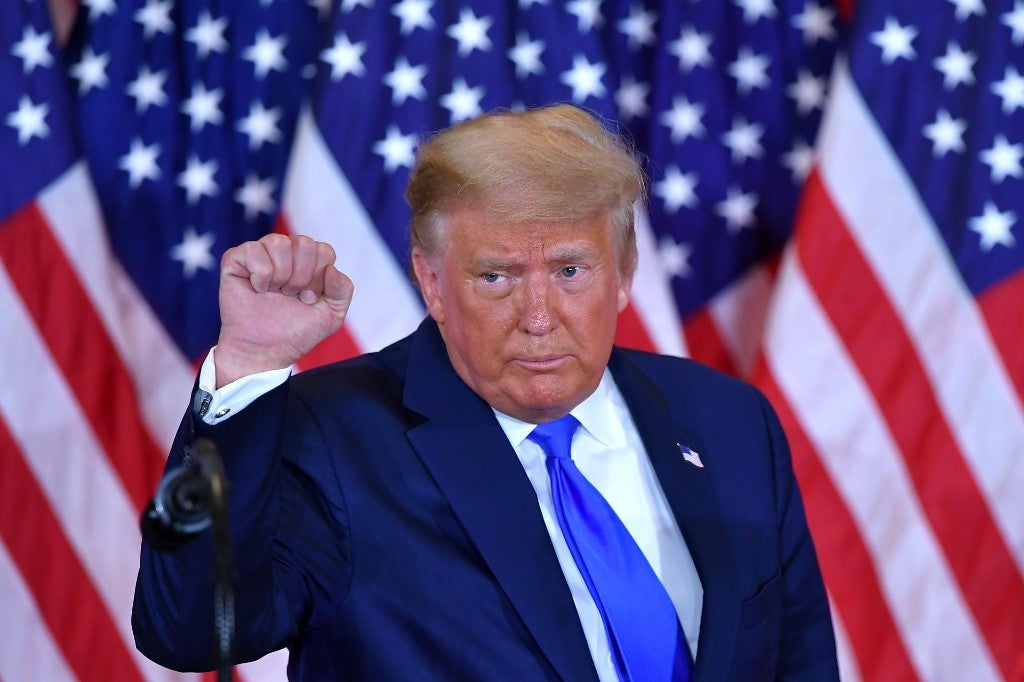 US President Donald Trump pumps his fist after speaking during election night in the East Room of the White House in Washington, DC, early on November 4, 2020. (Photo by MANDEL NGAN / AFP)

US President Donald Trump has said that, like in 2016, the pollsters underestimated the enthusiasm of his legions of supporters.

But if Democrat Joe Biden ends up squeaking out a win, the polls may prove to have been more accurate than when Trump upset Hillary Clinton four years ago.

“The ‘pollsters’ got it completely & historically wrong!” Trump tweeted on Wednesday after declaring victory before all the votes are counted.

While the 2020 race has not been decided yet, all indications are pointing to a slim Biden victory.

Four years ago, Trump was the underdog going into the election and most of the polls had Clinton the clear favorite.

Chris Jackson of the Ipsos polling and market research firm said the Trump-Biden polls “appear to be broadly on target across the South and Southwest.”

Averages of state polls by website RealClearPolitics had Biden slightly favored in Arizona, trailing in North Carolina and in a dead heat with Trump in Georgia.

The results were largely in line with the polls.

In Florida, a notoriously difficult state for pollsters, Biden had been slightly favored up until the final days leading up to the election.

An ABC News/Washington Post had Trump winning the Sunshine State by two points, close to the final margin.

At the same time, Jackson said “Trump appears to have again overperformed against pre-election polling in the Midwest.”

Trump notched up his surprise victory in 2016 with wins in the key states of Michigan, Pennsylvania and Wisconsin, where the polls all leaned towards Clinton.

In Wisconsin, the RCP average of state polls had Biden up by 6.7 points while New York Times and Washington Post surveys had him up by 11 and 17 points respectively.

With 98 percent of the vote counted in Wisconsin, Biden’s margin of victory there is just 0.6 points, or around 20,000 votes.

Ahead of the election, the political tracking website FiveThirtyEight.com said Biden would win in 89 out of 100 simulated outcomes.

FiveThirtyEight founder Nate Silver said that at the end of the day the 2020 polls may end up being not so far off.

“Don’t want to stir things up ‘too’ much but it seems like if a forecast says that Biden is favored because he could survive a 2016-style (~3 point) polling error when Clinton couldn’t, and you get that polling error and he indeed (probably) survives, it was fairly informative?” Silver said.

“I think that’s probably what we’re going to wind up with once all votes are counted,” he said. “3-ish points. Worse in some states, certainly, whereas in other states Biden will match or exceed his polls. Not unlike 2016.”

What does appear to be clear, is that many polls underestimated the vote for Trump.

Not all of them. A Des Moines Register poll in Iowa dismissed as an “outlier” at the time ended up being pretty much on the nose.

The newspaper forecast a seven-point win for Trump in Iowa and he won the state by eight points.

In 2016, the polls accurately forecast Hillary Clinton’s lead in the national vote but not the battleground states of the Midwest.

“This time, it looks like the national polls understated Trump’s share and that this occurred in most states as well,” said Christopher Wlezien of the University of Texas at Austin.

“Given the patterns, it looks like the polls missed something pretty systematic, not just random,” Wlezien said.

“I’m not sure the margin of error associated with sampling is that helpful in this case, but what specifically they missed remains to be determined,” he said.

Wlezien said there could be several factors.

“For instance, it may be that undecideds broke for Trump, much as they did 2016,” he said. “It also may be that there was a surge in Republican turnout.

“Some Democrats may have figured that Biden was pretty certain to win and so didn’t vote,” he said. “Maybe not that likely but possible.”