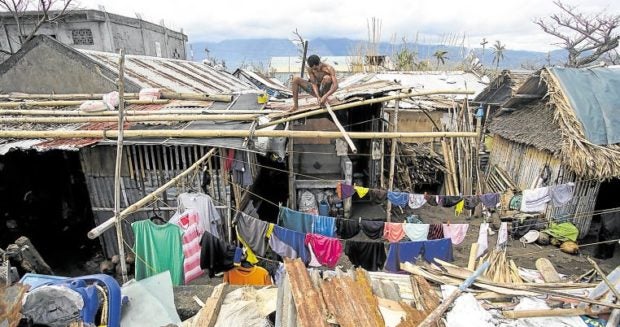 SLOW RECOVERY Residents of Barangay Baybay in Tiwi, Albay province, start on Tuesday to repair their houses after the onslaught of Typhoon “Rolly” in Bicol. —MARK ALVIC ESPLANA

The Department of Agriculture in Bicol said P1.1 billion worth of crops were destroyed by Rolly, affecting 17,059 hectares, with 53,383 metric tons of produce.

The Department of Public Works and Highways said P4.6 billion worth of infrastructure were destroyed.

Of the fatalities, 14 deaths were from Albay, while six were from Catanduanes province, according to a report by the Office of Civil Defense (OCD).

The OCD report said flooding was reported in 10 towns in Albay and 29 towns in Camarines Sur while lahar flows were reported in Guinobatan, Camalig, Santo Domingo and Tabaco City, all in Albay.

Reports from the Provincial Disaster Risk Reduction and Management Office said that of the 79,338 houses affected, 58,415 were partially damaged while 20,923 were totally destroyed.

With the severe damage in the primary power lines and facilities in Albay province, the restoration of power could take up to two months, Albay Power and Energy Corp. said.

Some P6.6 million worth of assistance from the national and local governments and nongovernmental organizations were distributed to victims of Rolly, according to the Department of Social Welfare and Development (DSWD).

Aside from food and shelter, the DSWD said it was also providing psychological first aid to affected families to reduce stress caused by the typhoon.

The Philippine Air Force (PAF) flew in on Tuesday with communications equipment, a power generator and relief goods to Albay and Catanduanes.

Galang said the C-130 aircraft was loaded with 18,000 pounds of cargo, which included a communications van, a generator set, folding beds, tents, four boxes of personal protective equipment and 150 boxes of bottled water from Asia Brewery.

The PAF’s C-295 plane flew in 235 boxes of food packs from the DSWD at Virac, Catanduanes.

Meanwhile, a minority senator said on Tuesday that the government must immediately impose a price freeze on basic goods in areas devastated by Rolly, including badly hit Catanduanes.

“A price freeze must be declared in the devastated areas. We also urge the local governments to consider declaring a state of calamity so that they are able to utilize additional funds, as well as to guard against inevitable price hikes due to higher demands for basic goods,” Sen. Francis Pangilinan said in a statement.

Rolly also damaged a total of 226 schools. The Department of Education said school buildings sustained P489.5 million worth of damage.

At a public briefing, Education Secretary Leonor Briones said they would be relying on funds from the National Disaster Risk Reduction and Management Council for the repair of the damaged schools. —With reports from Mar S. Arguelles, ‍ Ma. April Mier-Manjare, Nikka G. Valenzuela, Jeannette I. Andrade, DJ Yap and Meg Adonis