‘No bulls this year’: Pandemic halts festive but cruel spectacle in Peru

LIMA — In a matter of months, the novel coronavirus achieved something that animal rights activists failed to do in decades: put a halt to bullfighting in Peru.

The annual Señor de los Milagros (lord of the miracles) festival at Lima’s Acho Bullring that usually takes place in October or November was canceled this year due to Covid-19 restrictions.

The 14,000-capacity Acho Bullring is currently being used to provide shelter for homeless pensioners affected by the pandemic.

“There will be no bulls this year,” Rafael Puga, a retired bullfighter who also rears bulls, told Agence France-Presse (AFP).

It’s the first time since the festival began in 1946 that it’s been canceled.

“But it’s also the first time that the San Isidro festival in Madrid hasn’t been held. It’s due to a force majeure,” sighed Juan Manuel Roca Rey, who organizes bullfights in the Acho ring and also rears bulls, using a legal term referring to events beyond anyone’s control. 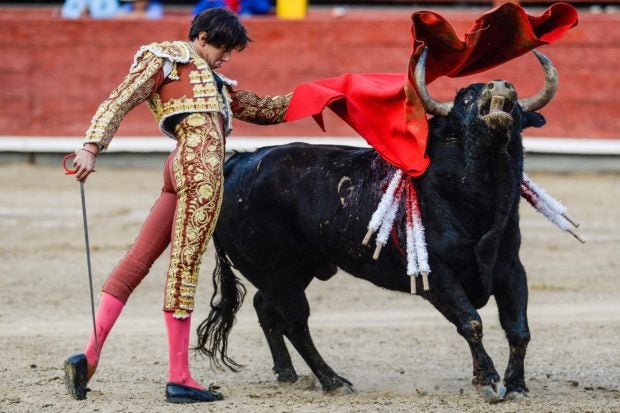 BIGGER THAN FOOTBALL For the first time since it was first held in 1946, the annual Señor de los Milagros festival in Peru featuring bloody bullfighting has been canceled due to the pandemic. —AFP

Bullfighting — known as a corrida in the Hispanic world — was brought to the Americas by Spanish conquistadors in the 16th century and has since become hugely popular among Peruvians of all social classes.

But they have all been banned due to the pandemic that has killed 34,000 people and infected 875,000 in the country.

Football, on the other hand, restarted in August after a five-month hiatus, although without fans.

“The fact that there aren’t any bullfights in the provinces is like death for breeders. Some won’t be able to survive because the cattle eat every day,” Rey said.

“This doesn’t just affect us artists but everyone that works around a bullfight,” said bullfighter Fernando Villavicencio, 34.

He said the ban has also affected bullfighter assistants, those who make the heavily embroidered suits, stable owners of horses used in the corridas and cattle transporters.

In Puga’s ranch 140-kilometers northeast of Lima, he has 400 fighting bulls and 140 “mother cows.” There’s also a small square where novice bullfighters can practice.

“We ranchers now have to live off other businesses. Some have even sent their cattle to the slaughterhouse, that is to reduce their livestock to a minimum to cut costs,” said Puga, 72.

Animal rights activists are celebrating, though.

“It’s good news. There’s no reason for the bull festival to go ahead,” Luis Berrospi, an activist also campaigning against cockfighting, told AFP.

In February, Peru’s top court rejected a lawsuit brought by animal rights activists hoping to ban cock and bullfighting on the grounds they were unconstitutional.

More than 5,000 people had signed a petition, submitted in 2018, demanding that “all cruel shows using animals” be banned.

But the constitutional court ruled that “there is no universal declaration of animal rights that has been adopted by either the [United Nations] or Unesco (United Nations Educational, Scientific and Cultural Organization).”

Peru has 199 bullrings, according to official statistics, far more than its 80 football stadiums.

Bullfighting websites claim that twice as many Peruvians pay to watch corridas than professional football.

Tickets for the Acho Bullring also cost more than those for the national football stadium. Last year, a ticket for all five Sunday corridas during the Señor de los Milagros festival cost up to $1,600.

By comparison, the most expensive ticket for all nine of Peru’s World Cup qualifying home matches was $1,200.