The repeated call “oop, oop, oop” gave rise not only to its English name hoopoe but also to its scientific Latin name Upupa epos. It belongs to the bucerotiformes order of birds that also includes the hornbills.

About the size of a dove, the Eurasian migratory bird has pink-beige plumage and a slim, slightly curved bill. It has a black-tipped crest which, when folded and flat, means that the bird is relaxed and at ease. When excited or during landing, the crest rises to an arc.

While the woodpecker searches for food on vertical surfaces like tree trunks, the hoopoe forages exclusively on horizontal surfaces on the ground in the short grass, but it nests in trees or walls. 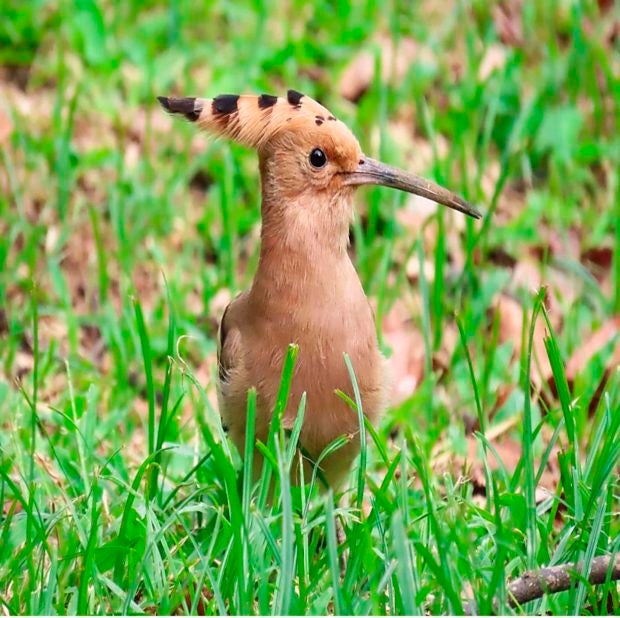 LIKE SEEING A POLAR BEAR ON EDSA A hoopoe was recently spotted in a privately owned nature reserve in Rizal. —GREG ENRIQUEZ/CONTRIBUTOR

In the 2000 book “Guide to the Birds of the Philippines,” coauthor Robert S. Kennedy noted how hoopoe sightings in the country had been rare, recounting “only 1 record in December from Palawan and about 5 records from Bataan.”

But perhaps the town of Tanay, Rizal province, may now be added to the short list of places with documented hoopoe visits

On Oct. 5, around 2 p.m., it was a sunny Monday afternoon at the sprawling Epic Park, a privately owned nature reserve in Tanay that has lain largely undisturbed for over a century, when park employee Nonoy Burce spotted an unfamiliar bird about five meters away and foraging for food under a tamarind tree.

Nonoy called out to fellow employee Greg Enriquez, who quickly got his camera. The result was five snapshots and a minute-and-a half video of the park’s rare feathered guest. 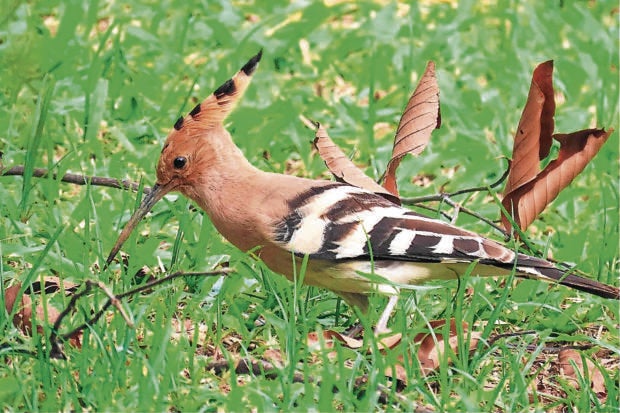 The hoopoe returned the next day, around 6:30 a.m. during a drizzle. It lingered closer to the property owner’s house, then flew to an aratiles tree, then to the roof, before more pictures could be taken.

The hoopoe has not been seen since but the “oop, oop, oop” call was heard again on Oct. 14. Social distancing?

Horst Kessler von Sprengeisen, a German ornithologist and longtime Philippine resident to whom this writer mentioned the hoopoe visit, remarked that “it was like seeing a polar bear on Edsa!’’

The property owners, Dr. Walter and Annabel Brown, were rewarded with the unique sighting for their respect for nature and for preserving natural habitats. The photographer was rewarded for his patience and dedication with this once-in-a-lifetime experience.

Read Next
‘No bulls this year’: Pandemic halts festive but cruel spectacle in Peru
EDITORS' PICK
New Year, New Rediscoveries
Is your company a growth champion? Stand up and be recognized!
Pope Francis to miss events due to new flare up of leg pain—Vatican
PNP’s Covid-19 cases jump to 9,809; 52 new infections logged
Acer Philippines welcomes you to its first flagship store
More than 150 National Guard in Washington for Biden inauguration test positive for coronavirus
MOST READ
Wife stabs husband after seeing her younger self in old photos, thought he was cheating
Gov’t approves cheaper, faster, safer saliva test for COVID-19
‘Tulungan na lang sana:’ Violent arrest of Parañaque vendor alarms 2 senators
Eyes on Bontoc town as more UK variant cases emerge
Don't miss out on the latest news and information.