Remembering the dead in Cordillera 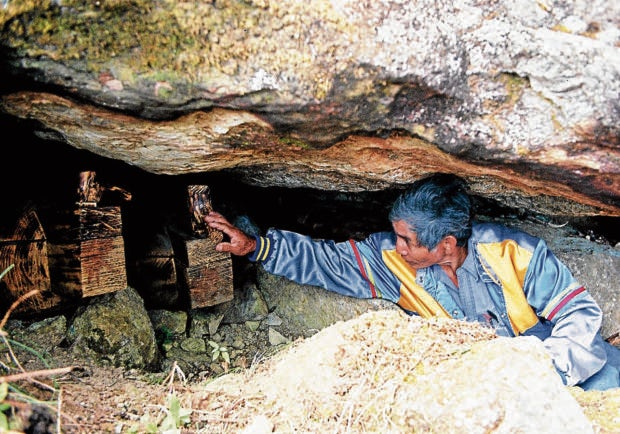 MOUNTAIN BURIAL Older generations of Ibaloys in Benguet province used to place their dead inside carved pinewood coffins, which are tucked into mountainside crevices, believing that their ancestors never really leave them and continue to guide the lives of clan members. —PHOTOS BY EV ESPIRITU

BAGUIO CITY, Benguet, Philippines—The government has clamped down on mass gatherings on Nov. 1 and Nov. 2 (All Saints’ Day and All Souls’ Day), the only time Filipino families gather to remember their deceased loved ones.

As such, cemeteries, memorial parks and columbaria in the country will be closed from Oct. 29 to Nov. 4, depriving millions of Filipinos a visit to the graves of their dead.

But that poses no problem for Marlon Martin, a resident of Kiangan town in Ifugao province, because like many Cordillera families, tradition requires them to keep the dead closer to home.

Tombs line the gardens or backyards of many Ifugao homes at the rice terraces and those in mountainside gardens of Benguet and Mountain Province.

For most Cordillera communities, death is not the end, said Martin, an officer of Save the Ifugao Terraces Movement.

Their ancestors continue to influence younger generations, whether it involves day-to-day chores or life-changing events, like a marriage or the birth of a grandson, according to various anthropological studies. 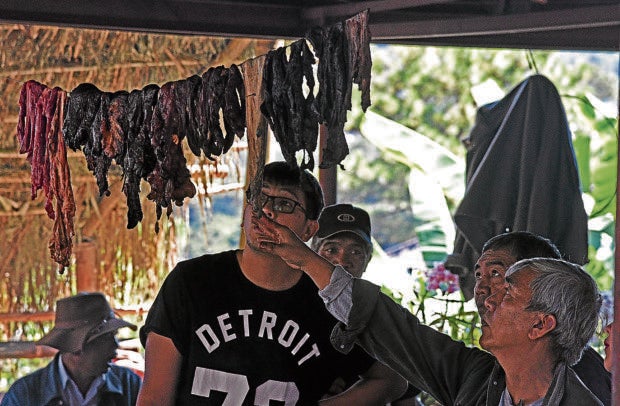 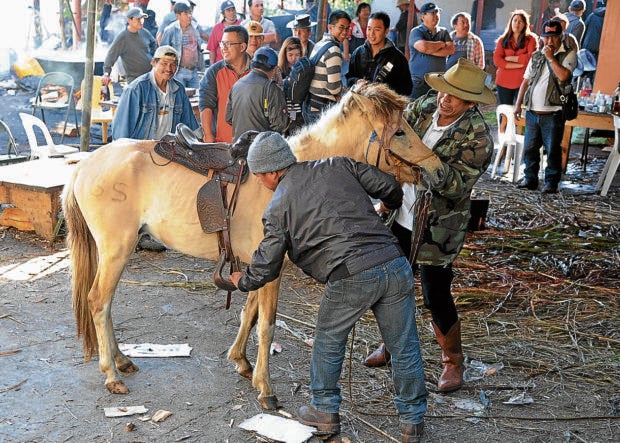 FIT FOR ‘KADANGYAN’ Affluent or influential members of Ibaloy society are given an elaborate ritual when they die, often requiring the sacrifice of a horse that brings them to the community’s version of heaven (bottom photo). The condition of internal organs of different sacrificial animals are observed and interpreted for the bereaved family by ritual leaders. Relatives and other mourners also partake of meat during the wake (top photo).

But ancestral spirits need constant attention or their living relatives may suddenly fall ill or suffer accidents. This explains why many families bury their dead under their houses or in designated clan or family burial grounds so families can continue cleaning them.

“‘Baki,’ the Ifugao system of rites and prayers, is performed regularly in the house,” Martin said, adding that this is done to invite the spirits to commune with the living.

“The last one [I attended] was on Oct. 20. I was raised a Catholic so I also observe ‘Undas’ and Christmas,” he said to stress the complication of the quarantine due to the coronavirus on his Nov. 1 ritual.

“I host the family. It has become a tradition to gather in the house on All Saints’ Day,” he said.

A resident of Hungduan town, also in Ifugao, echoed Martin’s view. “We do not need to observe Undas [in cemeteries] because the tomb of our dead is in the backyard. We see it every day, we clean it regularly, and we talk to the departed loved one whenever we need to,” he said.

Ifugao families whose relatives are buried in cemeteries attend Mass and light candles but rarely linger there, he said. Undas is just an ordinary day but special for those who work because it is a holiday, he added.

Except for La Trinidad, the capital of Benguet which has a public cemetery, the rest of the province are unaffected by the Undas ban because the tombs are near the houses.

Like the rest of the country, the town cemetery will be closed from Oct. 29 to Nov. 4, but the ban is not the biggest issue most Cordillerans have against the government war to prevent the spread of the coronavirus.

Many indigenous peoples, including those in Baguio City, have anguished over health and security guidelines that require the immediate cremation of the dead, sometimes before laboratories could determine whether they died from the coronavirus.

In some cases, cremation prevents some clans from undertaking rituals that would give the dead some peace, said Vladimir Cayabas, a Baguio councilor who sponsored a resolution urging medical workers to speed up tests on indigenous peoples. 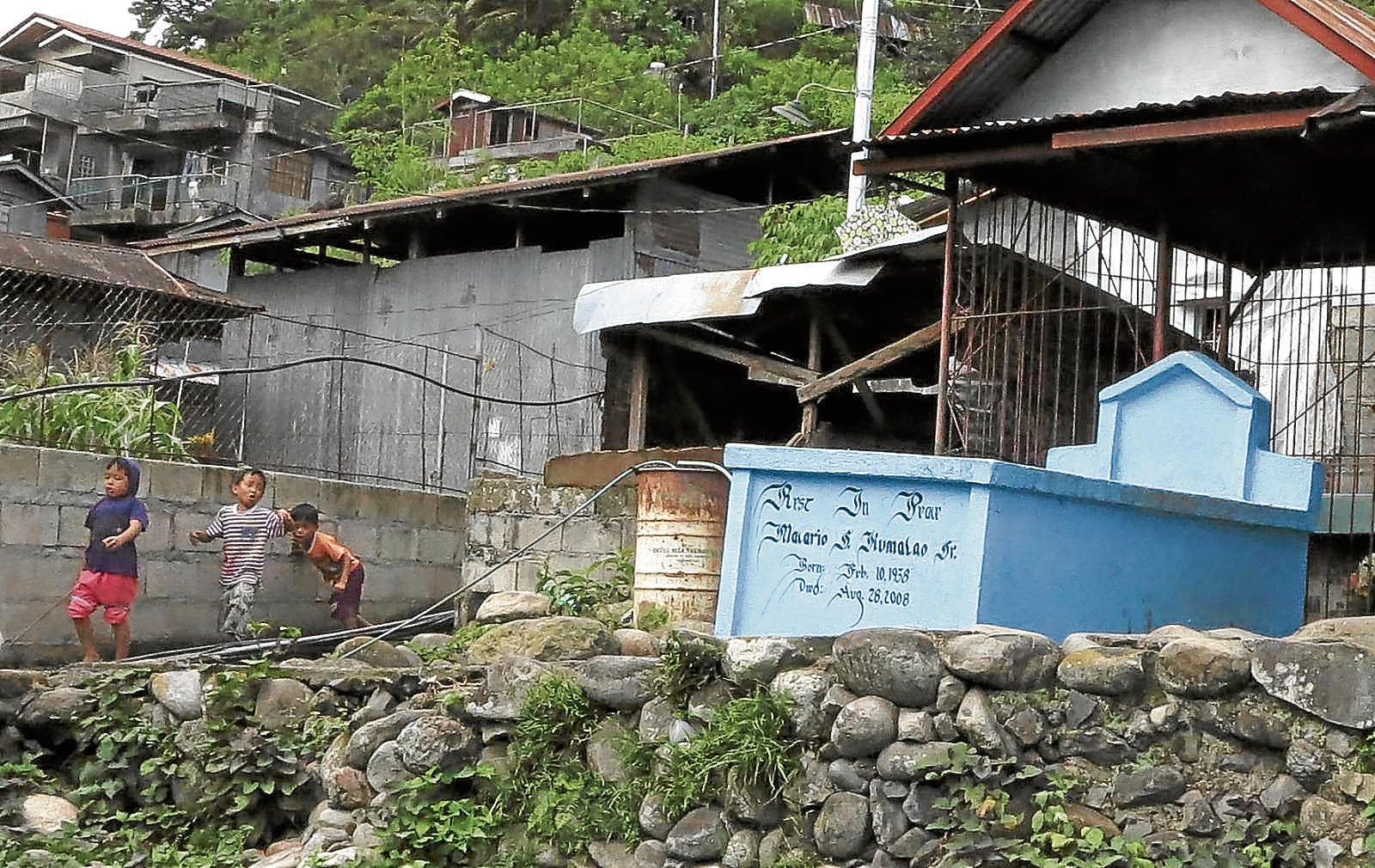 CLOSER TO HOME Ifugao resident Alex Ordillo keeps the remains of his ancestors Bay-angan and Payyaga Linmangya in a native hut built near his house in Banaue town as part of the couple’s wishes to the family before they died. 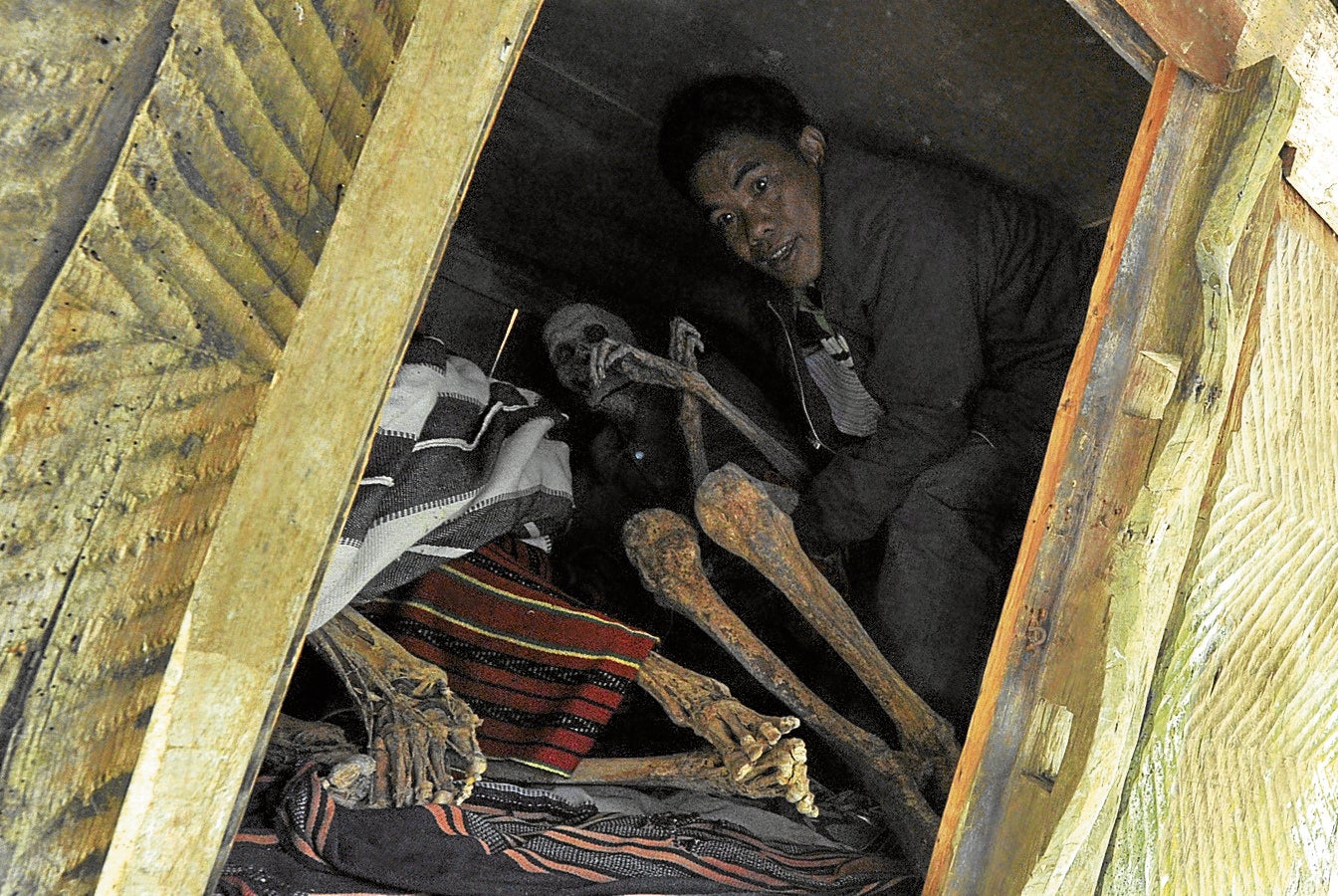 DEARLY DEPARTED The pandemic may prevent families from visiting the tombs of their dead, but not for Cordillera clans who traditionally bury their loved ones beside their homes or within family property, like this burial place in the Mountain Province town of Bontoc.

Some community rituals are flexible, however. Sagada town in Mountain Province burns “saleng” (treated pinewood) at the public cemetery for the same reason Catholics light candles for the dead.

The ritual, called “panagapuy,” has not been suspended because of the quarantine. Each village has its own schedule for it, according to Sagada Mayor James Pooten who will participate in his community ritual on Oct. 26.

All villages in the town have until Oct. 28 to complete their rituals. Residents who have day jobs would have to perform the rituals after office hours while those who need to visit the tombs may do so after Nov. 4, Pooten said.

Despite the restrictions on public gathering or movement, Cordillerans believe keeping their ancestors appeased is all that matters.

In some cases, families undertake the “bogwa” by exhuming the dead so they can cleanse the bones.

“This is perhaps their most important way of honoring and remembering the dead. It is a second or even third funeral requiring sacrificial animals. You don’t do the bogwa only after a family member gets sick or has a bad dream. It should be a ritual performed every few years after somebody passes away,” Martin said.

In every Ifugao ritual performed by the “mumbaki” (ritual priest or leader), the “aammod” (ancestors) are remembered and are invoked to participate, he said.

“At the start of the baki, the mumbaki recites the ‘mangammod/munlinnawa’ or the naming of all Ifugao ancestors,” he said.

The mumbaki invokes the names of the departed ancestors every time the rituals are performed to invite them to partake in feasts and ask for their intercession in times of family hardships and for their protection in cases of conflict.

“This invocation during rituals ensures that the dead are remembered by the living,” Martin said.

“There is a thin line between the living and the dead in the traditional life of the Ifugao. This is also the reason Undas is easily assimilated by the Ifugao because of this common veneration of the dead.”