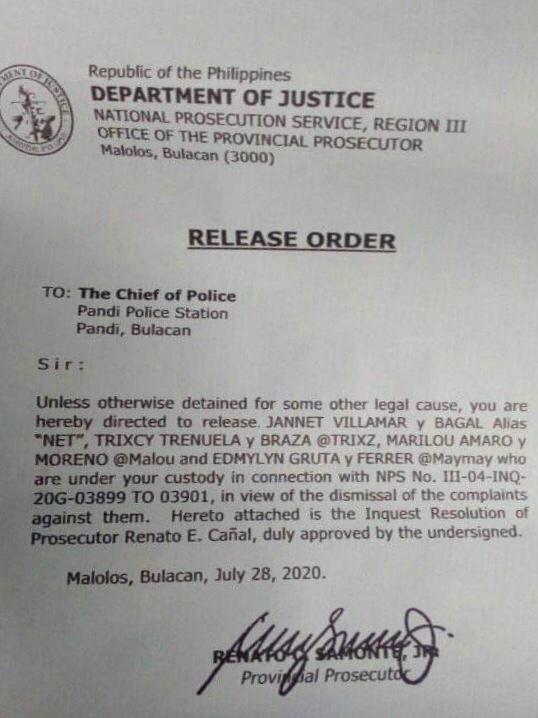 A copy of the release order issued by Provincial Prosecutor Renato Samonte Jr.

MANILA, Philippines — The four women activists arrested in Bulacan last July 27 have been released following the dismissal of complaints filed against them by the police.

Released from detention Wednesday morning were Janet Villamar, Trixie Trenuela, Marilouy Amaro, and Edmylyn Gruta or the “Pandi 4.” Their release came after the Office of the Provincial Prosecutor dismissed the complaint for  Republic Act 11332 and Batas Pambansa Blg. 880, or the Mandatory Reporting of Notifying Disease Law and the Public Assembly Act of 1985.

“Unless otherwise detained for some other legal cause, you are hereby directed to release Janet Villamar, Trixie Trenuela, Marilouy Amaro, and Edmylyn Gruta who is under your custody,” read the release order signed by Provincial Prosecutor Renato Samonte Jr. addressed the Chief of Police of Pandi, Bulacan.

The four were arrested after staging an online protest calling for mass testing, aid, and the release of fellow Kadamay Pandi member Rose Fortaleza, who was arrested July 26 after police raided a Kadamay office and confiscated copies of alternative publication Pinoy Weekly.

Kadamay welcomes the decision and said that there was never any basis for the case in the first place.

The group said it is eyeing the filing of complaints against the police officers.