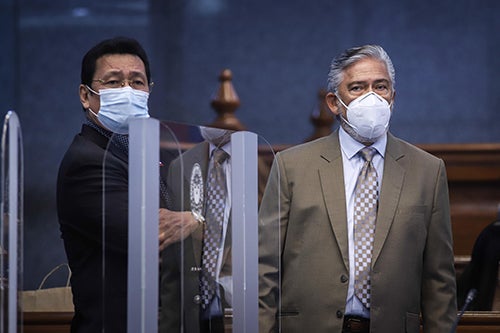 Sen. Lito Lapid (left) chats with Senate President Vicente Sotto III before the start inquiry into the alleged failure of PhilHealth) to release insurance claims to its accredited hospitals as well as alleged widespread corruption in the agency Tuesday, August 4, 2020. (Joseph Vidal/Senate PRIB)

In an online interview with reporters on Wednesday, Sotto expressed hope that the Senate’s committee report will hold weight to the Palace’s perception regarding alleged irregularities hounding the state health insurer.

“After Tuesday, kung ano man ang kahihinatnan ng pagpupulong ng committee of the whole ng Senado, kung ano ang rekomendasyon namin, siguro naman it will have weight in the perception of the Palace,” he said.

The Senate committee of the whole, chaired by Sotto, is set to resume its investigation into the PhilHealth mess next Tuesday, August 11.

“Kukumpletuhin namin by Tuesday [ang committee report] and siguro after that, we will give our recommendation (to the President.) E nanghihingi ng ebidensya e ‘di hanapin natin ‘yung ebidensya,” he added.

Earlier, Presidential spokesperson Harry Roque said the President will not axe Morales unless there is evidence that he is involved in corruption.

In July 2019, Duterte appointed Ricardo Morales, a retired Army brigadier general, as PhilHealth president and CEO to supposedly rid the agency of corruption.

But a year later, Morales admitted during the Senate hearing that he has yet to fire a single PhilHealth official due to corruption, citing a lack of substantial evidence against them.

Senators had also scored Morales for promoting four officials who are currently facing graft complaints about their alleged involvement in the WellMed “ghost” dialysis scam that was uncovered in 2019.

Morales insisted he was unaware that complaints had been filed against the officials he had promoted.

Earlier, Duterte himself ordered investigation on supposed corruption after some of the state insurer’s officials reportedly had a rift due to the “overpriced” procurement of an information technology (IT) system.

Morales, however, defended the IT project, saying it would help PhilHealth stop fraud and scams within the agency.

As for other “overpriced” IT equipment, Morales had argued that he presumed there was regularity in the documents he signed for the procurement of such items.

“The documents I signed go to several processes. They go to several [officials] who are supposed to do their due diligence before it reaches me for approval,” Morales had said.

“So I assumed, sir, in this case, that the figures presented to me were the right and correct figures for the items we purchased,” he added. “I assumed that there was no problem with the final price, that it was the correct amount.”

The PhilHealth chief also denied being a “coddler” of a “syndicate” within the agency that allegedly pocketed P15 billion of funds through various schemes.

According to Sotto, the Senate is still drafting its committee report and will likely finish it after next week’s hearing.

“We’re drafting pa lang some points; I’d rather not let the cat out of the bag. We’re drafting already some points that are very obvious during the hearing,” the Senate president continued.

But when asked whether or not the committee will recommend for the filing of appropriate cases to those involved in the alleged overpricing of equipment as well as other issues of corruption, Sotto said: “Sigurado. Siguradong siguardo.”

‘Benefit of the doubt’

Nevertheless, Sotto said he was willing to give Morales the benefit of the doubt. The senator said the PhilHealth president may just have been misled by some officials of the agency.

During the hearing, Morales also told senators that PhilHealth “potentially lost” around P10.2 billion in 2019 to fraudulent transactions and schemes.

This loss could balloon to P18 billion by next year if not addressed properly, he added.