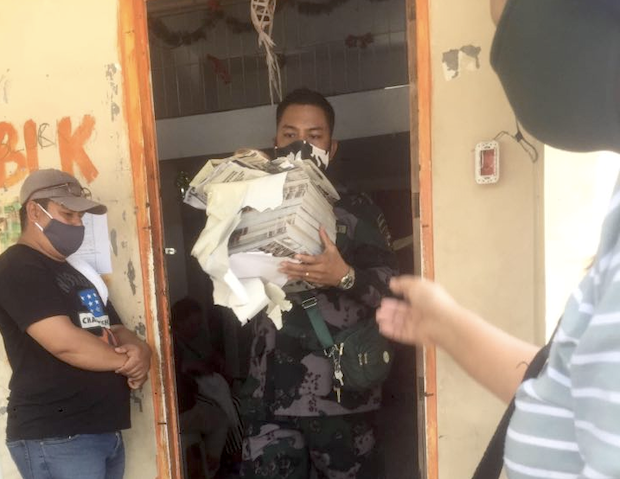 MANILA, Philippines — PinoyMedia Center Inc., publisher of Pinoy Weekly, denounced on Sunday what it called the “illegal” seizure by police of thousands of print copies of its magazine in Pandi, Bulacan.

“Members of Kadamay asked for a search warrant from the cops. PCpt. [Police Capt.] Jun Alejandrino, Pandi police chief who headed the raid, said the magazines were ‘illegal’ and that they should give up the copies or else “may mangyayari” [something will happen],” Guda said in a statement.

According to Guda, witnesses of the raid claimed that Alejandrino said that the publication “teaches the people to fight the government,” thus making them “illegal.”

“The Pandi police chief and his men are grossly ignorant of the law. The magazine copies are the property of the residents of the Pandi housing projects and members of Kadamay-Pandi,” Guda said.

“Seizing these copies without warrant or seizure order may constitute robbery. What PCpt Alejandrino and his men did was illegal,” Guda added.

He insisted that the police were “committing a crime”, saying that “either the police chief is ignorant of the constitutionally-guaranteed freedom of the press and freedom of expression, or he chooses to trample upon it.”

Guda explained that PinoyMedia Center, Inc. is registered with the Securities and Exchange Commission (SEC) as a  nonprofit media organization.

“Pinoy Weekly is a well-established, independent print and online publication that has been in existence since 2002. We publish investigative, explanatory, narrative, and analytical reports in the Filipino language, targeting underreported and marginalized sectors and communities,” Guda said.

What the police did, he added, was “an act of tyranny.”

“It has no place in our supposedly democratic society. We will not be silenced and will fight this blatant act of repression,” Guda said.

INQUIRER.net has reached out to the Philippine National Police (PNP) regarding the matter but has yet to receive a reply as of posting time.

Asked where she’d focus if she were president, Robredo says trust, accountability