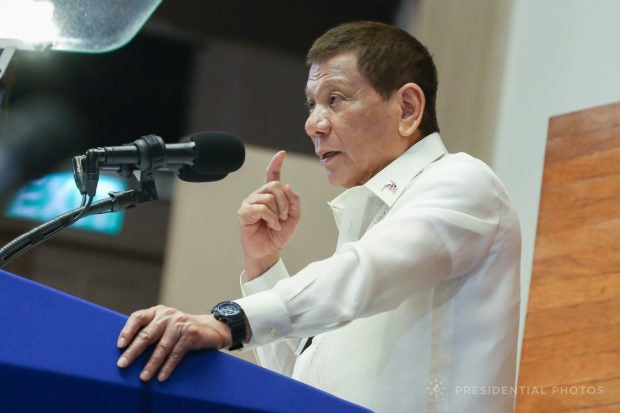 Unlike his late arrival for last year’s SONA, Duterte’s helicopter landed on time at the Batasang Pambansa complex in Quezon City with some members of Congress and the Cabinet waiting inside the plenary hall.

READ: On time: Duterte arrives at Batasan for penultimate Sona

Duterte stood at the rostrum—at his back were Senate President Vicente Sotto III and House Speaker Alan Peter Cayetano—as he delivered his speech that lasted for more than an hour and 30 minutes.

In the second to the last of his SONA, Duterte touched on the pandemic the country is facing, endorsed the passage of several priority bills, laid out government achievements, while from time-to-time slamming his critics—most notably Senate Minority Leader Franklin Drilon.

Duterte likewise addressed various controversial issues such as the revival of the death penalty and the West Philippine Sea.

Here are some of the highlights of Duterte’s speech.

While many were waiting for Duterte to lay down his plan to address the pandemic, the President chose to first assail those whom he said were taking advantage of a preoccupied government, particularly Drilon.

Without mincing words, Duterte lambasted the Senate minority leader for “arrogantly” making a remark on oligarchs and supposedly defending the Lopezes, the family that owns broadcast giant ABS-CBN whose franchise bid was recently denied by the House committee on legislative franchises.

“One of them is Senator Franklin Drilon. In an interview, he arrogantly mentioned, among others, that oligarchs need not be rich. Then he linked the anti-dynasty with oligarchy and the topic was my daughter and son,” Duterte said.

Later on, Duterte once again hit Drilon, calling the senator a hypocrite.

“Sabi mo na dynasty, dynasty. You are a hypocrite. You know you can’t pass an anti-dynasty law. Ikaw yung nasa Congress, ikaw ang mauna dito. But to take it against me for protecting my country is something which I really resent,” Duterte said partly in Filipino.

The president laid down several government measures to aid Filipinos amid the pandemic, like the continuation of the social amelioration program (SAP).

But even Duterte admitted that the implementation of the program was “not perfect”, as he warned opportunists against abusing the program.

“We will catch up with you sooner than you think,” Duterte said.

The President also ordered the Department of the Interior and Local Government (DILG) and the Department of Social Welfare and Development (DSWD) to investigate complaints that some drivers whose livelihood was disrupted by the pandemic were unable to receive assistance from the government.

He also called on commercial establishments to give grace periods and allow deferment of payments especially for MSMEs that were forced to close down during the quarantine period.

“Nananawagan ako sa ating mga lessors, malasakit at bayanihan sana ang pairalin natin ngayon. (I appeal to our lessors, let caring and unity prevail today). This is not the time to drive away lessees. Now it’s time to be fair and compassionate. Come up with amenable arrangement with your tenants,” Duterte said.

READ: ‘Be fair, compassionate’: Duterte appeals to lessors amid pandemic

On education, Duterte made clear his preference for face-to-face classes to resume only in January 2021.

“I cannot and I will not put at risk the lives of our students and teachers,” Duterte said.

Further, Duterte said that TV frequencies that would be reverted to the government should be used to aid the country’s shift to e-learning as the COVID-19 pandemic restricts schools from holding physical classes.

He then directed several government officials “to come up with program and implementation mechanism to ensure that these TV frequencies are fully utilized by the government to the facilities of the PTV4 for the utmost benefit of the Filipino people.”

READ:  Duterte wants TV frequencies reverted to gov’t to be used for e-learning

He likewise ordered the Technical Education and Skills Development Authority (TESDA) to come up with a program to “retool” the displaced OFWs to help them find employment.

Further, Duterte asked the Land Bank of the Philippines and other government financial institutions to continue providing low-interest loans to OFWs.

Duterte also called on government agencies to digitize and adopt paperless transactions to avoid queueing amid the COVID-19 pandemic.

The president then asked the Department of Budget and Management,  Anti-Red Tape Authority, and all government agencies to make all possible government services available online.

Once again, Duterte made a push to revive the death penalty in the Philippines for drug-related charges.

“I reiterate the swift passage of the law reviving the death penalty by lethal injection for crimes specified under the Comprehensive Dangerous Drugs Act of 2002,” Duterte said.

This was not the first time Duterte endorsed the return of the death penalty, which had been suspended in 2006, for drug trafficking and other heinous crimes, saying that it will instill fear among criminals.

Duterte also warned that there will be more piles of dead bodies if criminals return to their “old ways”, as he gave assurance that the country will be “relatively peaceful” as long as he is President.

“I’m addressing myself to criminals. You commit all sorts of things and you harm the public, then kaaway mo na ako (then I will be your enemy),” Duterte said.

READ: Duterte to criminals: Go back to your old ways, dead bodies will pile up again

PH and China, US

Duterte disclosed that he had pleaded to Chinese President Xi Jinping to allow the Philippines to be among the first to purchase the COVID-19 vaccine from them once it is available.

“Let me just mention it in passing that four days ago, I made a plea to President Xi Jinping that if they have the vaccine, can they allow us to be one of the first — or if it is needed if we have to buy it that we will be granted credit so that we can normalize as fast as possible,” Duterte said.

Moreover, Duterte also tackled the territorial dispute with China in the West Philippine Sea, saying the only way the Philippines can wrest control of islets or islands that China now occupies is to go to war which he said the Philippines cannot afford.

“China is claiming it, we are claiming it. China has the arms. We do not have it. So, it’s simple as that. They are in possession of the property,” Duterte said.

Duterte likewise claimed that the United States wants to return to its former base in Subic Bay, but said that US bases will put Filipinos in “extinction” should a war break out.

READ: Duterte turns down reported US plan to return to Subic

Like in previous SONAs, Duterte called on Congress to pass several bills such as the following:

Less than a month after ABS-CBN’s franchise was denied, Duterte said that he was a “casualty” of the broadcast network.

“Media is a powerful tool in the hands of oligarchs like the Lopezes who use their media outlets to battle with political figures,” Duterte said.

In his speech, Duterte also took a jab at telecommunication companies Smart and Globe, saying that the Filipinos’ patience with the companies’ services is already at its “limit.”

“Kindly improve the services before December. I want to call Jesus Christ to Bethlehem, better have that line cleared,” he added.  – with reports from Darryl John Esguerra, Christia Marie Ramos, and Krissy Aguilar