Lawmakers vow to support Duterte on priority proposals in Sona 2020 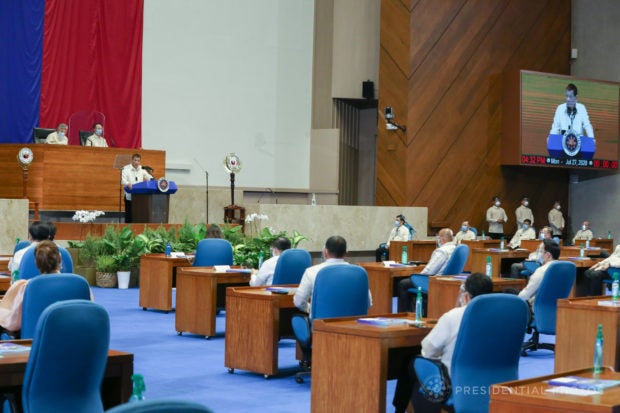 MANILA, Philippines — Lawmakers from the House of Representatives vowed on Monday they would prioritize proposals and measures mentioned by President Rodrigo Duterte during his fifth State of the Nation Address.

House Majority Leader Martin Romualdez said the chamber is ready to “face the challenges spelled out” by the President during his speech.

“As partners in nation building, we commit ourselves to the realization of the state’s concrete plans and the passage of the priority legislative measures provided by the President,” he said in a statement.

“I pray that all Filipinos will heed the clarion call of the President for every able bodied citizen to join the people’s war against COVID-19. There are no spectators in this fight. We need to link arms, and win as one, if we are to survive as a nation,” he added.

For his part, House agriculture chair Mark Enverga commended the President for the inclusion of agricultural development in his agenda, particularly the P66 billion Agricultural Stimulus package.

“The president deserves to be recognized for his thoughts that along his “Build, Build, Build” program, we must also focus on “Plant, Plant, Plant,” in agriculture,” he said in a separate statement.

“Indeed, with improved infrastructure, we have to ensure our agri growth thru production and marketing,” Enverga added.

“In the committee on agriculture, we are about to approve the substitute bill on Coco Levy Trust Fund, outlining the management and utilization of the levy assets as a trust fund for the benefit of the coco farmers and industry,” the House agriculture panel chair said.

“We assure the President that all his thoughts and guidance will be reflected in the house bill all for the welfare of the coconut farmers,” he added.

The President’s request for the quick passage of a second stimulus package and of the Corporate Recovery and Tax Incentives for Enterprises (CREATE) were “unambiguous” cues to show where the House’s economic team should go, he added.