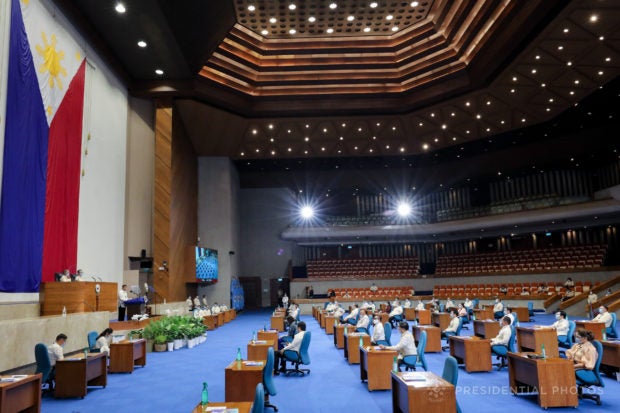 MANILA, Philippines — Several senators found President Rodrigo Duterte’s penultimate State of the Nation Address (Sona) lacking in terms of providing concrete plans to lead the country in its path to recovery from the coronavirus pandemic.

“Unfortunately, the speech wasn’t inspiring, reassuring, hopeful and even divisive. Not much detail on how to win the war against [COVID-19],” Senate President Pro Tempore Ralph Recto said in a message to reporters.

In a separate statement shortly after the chief executive delivered his Sona, Recto also said the President “could have made it detailed and nuanced, in a language that is comforting, assuring and emphatic.”

“I think the President economized in spelling out his anti-pandemic program, which is what Filipinos were expecting to hear more from him,” Recto said.

“It scored low in the inspirational index. People were expecting a pep talk that will boost their morale, steel their resolve and will leave them to conclude, without a doubt, that indeed, we shall overcome,” he added.

The Filipino people need “hope and direction” as the country continues to grapple with the pandemic, according to Recto.

“[H]e could have used that speech to ignite their fighting spirit and light the way forward for them,” he added.

Duterte, during his fifth Sona, called on Congress to pass several COVID-related measures.

“The President gave Congress a long laundry list to work on,” Recto said.

But the President “should have also given marching orders to his men, especially those who are lagging behind in delivering programs to the people,” the senator added.

“But like existing ones, their proof is in the implementation. Oftentimes, excellent visions are cancelled by poor execution,” Recto said.

“In this regard, Cabinet or sub-Cabinet changes should be explored, so that promises made can be fulfilled. It is one way of redeeming the pledges made during the fourth Monday of July. In the battle for national survival, we need the best men up the front,” he added.

For Sen. Joel Villanueva, the President’s address to the nation failed to “clearly” lay out a concrete plan on how the government plans to generate jobs for families affected by the health crisis.

“We were waiting for the President to tackle a clear and comprehensive plan to address the unemployment problem,” Villanueva, chair of the Senate labor committee, said in a separate statement.

“There are about 7.3 million workers across the country who lost their jobs during the lockdown, not to mention the estimated 400,000 OFWs who are set to return to the Philippines after they have lost their jobs abroad,” he added.

Villanueva said he would have also wanted to hear from the President’s speech how the government plans to modify the “Build, Build, Build” projects to fit the economic recovery plan.

“If we are thinking of pump priming, we should plan to spend on systems and infrastructure that will make us more resilient in the future like investing in a national vaccine center,” the senator said.

“Moving our production to a greener economy might be a good direction so that we can also address climate change concerns,” he added.

Further, Villanueva said the President should have explained how the COVID-19 loans from international financial institutions have been utilized or are being utilized.

“If we have not utilized, what is the plan in utilizing this?” he asked.

He also underscored the need to need to review the salary and tenure of frontline personnel to ensure reduced vulnerability.

“We realized that our frontliners such as street sweepers and garbage collectors are among the most vulnerable and often subject of contractualization. And yet they worked so we can stay safely at home,” he added.

For her part, Senator Risa Hontiveros pointed out the lack of a health and economic roadmap in the President’s speech.

She said the chief executive started off his Sona “by assailing his critics and ranting about his personal grudge against the media.”

But Senator Aquilino Pimentel III, a known ally of Duterte, believes that COVID-19 was “sufficiently” discussed in the President’s speech.

Pimentel himself is a COVID-19 survivor. He tested positive for the coronavirus in March and recovered from the disease in May.

“[COVID-19] could not be the only topic because it is not our only ‘concern.’ But there were many measures mentioned by the president which will allow us to live and progress with [COVID-19] and after the pandemic,” he said in a message to reporters.