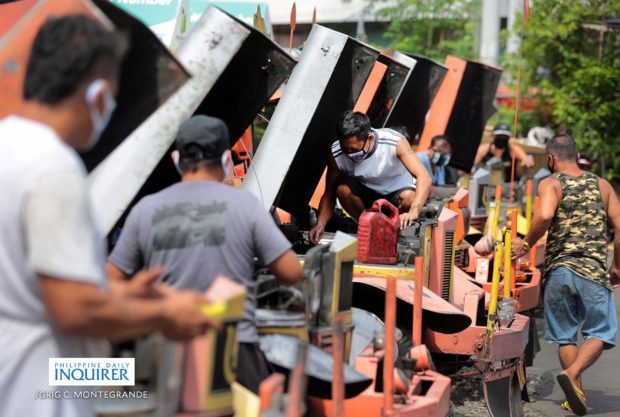 Drivers of traditional jeepney of a local operator in San Juan City check their respective vehicles on June 25 as they prepare to ply their route after the LTFRB announced on Wednesday that UV express units and traditional jeepneys will be allowed to travel on roads in Metro Manila next week. INQUIRER file photo / GRIG C. MONTEGRANDE

MANILA, Philippines — President Rodrigo Duterte on Monday ordered the Department of the Interior and Local Government (DILG) and the Department of Social Welfare and Development (DSWD) to investigate claims that some drivers of public utility vehicles did not receive any cash subsidy.

“Public utility drivers were given assistance through the Pantawid Pasada Program,” Duterte said in his fifth State of the Nation Address.

“There are some complaints that some drivers did not receive any assistance at all. I have directed the DSWD and DILG to look into this,” he added.

Public utility drivers were among the most-affected sectors as public transportation was suspended after several parts of the country were placed under lockdown to curb COVID-19.

It was only earlier this month when traditional jeepneys deemed “roadworthy” were allowed to ply back on selected routes.

Under the SAP, each beneficiary will receive P5,000 to P8,000 cash subsidy for two tranches based on the prevailing minimum wage rates in their respective regions.