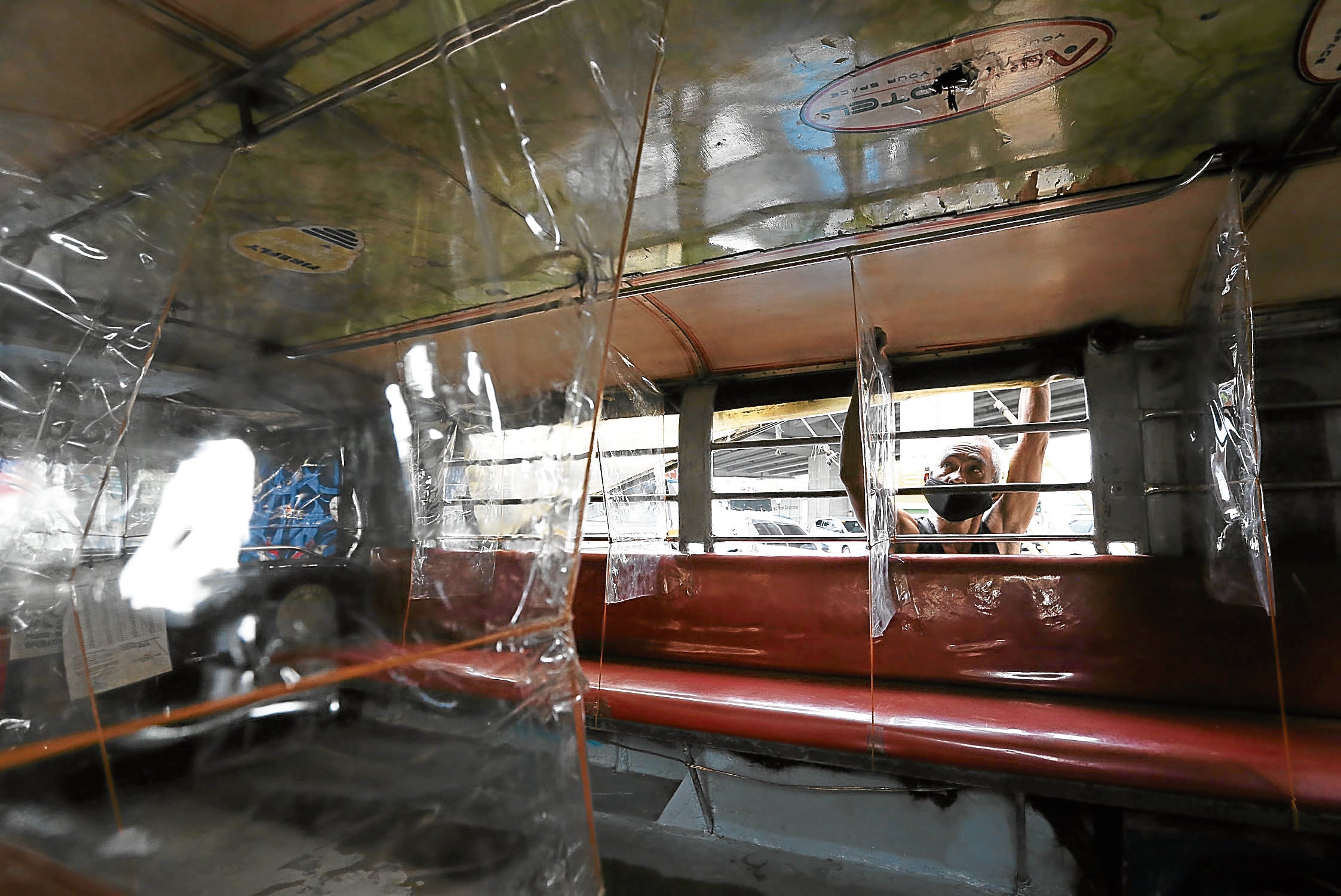 BACK ON THE ROAD Dong, a jeepney driver, shows one of the passenger vehicles in San Andres, Manila, that he helped to prep up in time for its return to the road on Friday. Plastic dividers installed inside the vehicle separate passengers from each other to prevent the spread of the new coronavirus that causes COVID-19. —LYN RILLON

A day before jeepneys were set to return to the road, site migration issues downed the website of the Land Transportation Franchising and Regulatory Board (LTFRB) where the operators were supposed to get their quick response (QR) codes needed for them to ply their routes.

The LTFRB QR code, which is a type of bar code, was supposed to be downloaded from the website, printed and displayed on the windshield of jeepneys allowed back on the road.

For now, the LTFRB said, jeepney drivers on its master list would be allowed to operate without the QR codes until Monday, when the website upgrade was expected to be finished.

The QR code was supposed to simplify road enforcement after the LTFRB on Wednesday night approved the return of 6,002 jeepneys to 49 routes across Manila starting on Friday.There will be no apprehensions until then, LTFRB chair Martin Delgra said.

Based on the guidelines outlined under Memorandum Circular No. 2020-26, only roadworthy jeepneys registered with the Land Transportation Office (LTO) were allowed to ply the routes opened by the LTFRB.

If a jeepney is registered with the LTO, it means it has undergone the necessary roadworthiness tests to secure a franchise in the first place, Delgra said.

Another layer of enforcement

Nevertheless, jeepneys would still be subjected to another layer of enforcement: “Tanggal Bulok Tanggal Usok” checks by the temporary Inter-Agency Council on Traffic, after the Department of Transportation (DOTr) announced it would no longer tolerate smoke belchers on the road.

On top of the mandatory requirements for public utility vehicles, such as mask wearing and regular sanitation of vehicles, passing fare payments from passenger to passenger is also not allowed, Delgra said.

Drivers and operators are advised to devise payment systems to limit this practice, either by paying directly to the driver or paying only exact fares.

All 49 routes are distributed across the 16 cities and one municipality comprising Metro Manila, particularly in areas not yet serviced by trains, buses, UV Express vehicles or minibuses, Delgra said.

The board chose the routes based on projected demand from commuters who were still struggling to get to work as the nation entered its third general quarantine period.

Operators considered the LTFRB’s decision to bring back jeepneys a “half-victory” after resisting the DOTr’s move to phase out the jeepneys.

In a statement, militant transport group Piston said the number of approved routes and jeepneys remain miniscule compared to the number of drivers who were displaced by the three-month transport stoppage.

Before the pandemic, there were around 579 routes serviced by around 55,000 jeepneys, according to LTFRB data.

This, coupled with the physical distancing guidelines requiring jeepneys to carry only half their capacity, would inevitably cut into the drivers’ incomes, Floranda said.

“Still many more drivers and operators will continue to starve,” he said. “The LTFRB had only given back fragments of the old routes to them.”

“While this is a half win for us, we still need to push back against the government’s moves to modernize amid this pandemic,” Floranda said.