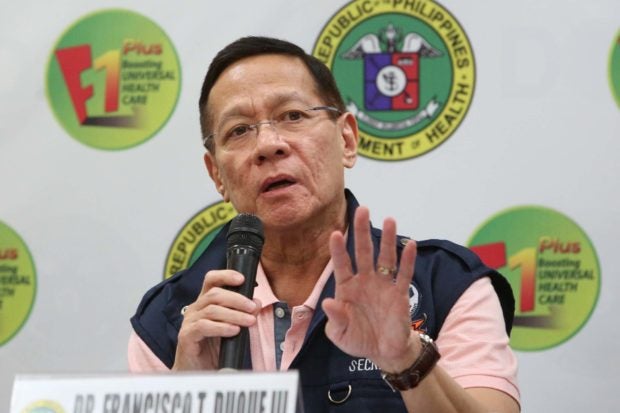 MANILA, Philippines — A group of private hospital administrators has asked President Rodrigo Duterte to sack Health Secretary Francisco Duque III, saying the country is in need of someone with a “fresh mind” to head the agency at the forefront of the country’s response efforts against the coronavirus disease.

In a letter to Duterte on Monday, Private Hospitals Association of the Philippines Inc. (PHAPi) president Rustico Jimenez said their group of 744 hospitals want “someone who can deliver the goods better in addressing the health concerns of the country.

For one, Jimenez claimed that most of their members are now “financially drained” because they are “given the runaround” by the Philippine Health Insurance Corp. (PhilHealth) on the interim reimbursement mechanism (IRM).

PhilHealth is chaired by Duque, while IRM is the firm’s financial aid tool meant to assist health institutions affected by natural and man-made calamities which have “devastating effects on their ability to continuously provide health care” to the public.

“Although some have already received their share, most, however, are now so financially drained as they are still awaiting for the promised IRM,” Jimenez said.

Previously, PHAPi has repeatedly accused PhilHealth of failing to pay up its members, an allegation which the firm denied over and over again.

For COVID-19, PhilHealth is using IRM to release P30 billion so hospitals have the necessary funds to address the outbreak. To date, it has already released P13 billion.

For his part, Sen. Panfilo Lacson on Monday called on Duque anew to just step down amid reports that President Duterte was set to fire him as Department of Health (DOH) chief even as he said all Filipinos “deserve a better chance” of surviving the new coronavirus pandemic.

Lacson, who had called out the DOH for its allegedly anomalous purchase of overpriced medical equipment, said it would not be difficult for the President to replace Duque.

“There are at least 170,000 licensed physicians in the country who can be more competent and honest than [Duque]. They are all my candidates for [his] replacement,” Lacson said in a Viber message.

“[Duque] may consider taking the initiative to quit his post as an act of sacrifice, especially for the sake of those outside of the 868 dead Filipinos and 14,035 others so far confirmed by DOH as officially infected [with COVID-19],” he said.

Sen. Risa Hontiveros said keeping the beleaguered health chief a day longer would further erode public confidence in the government’s response in containing the transmission of the virus.

Sen. Francis Pangilinan said he was hoping the report about Duque’s possible sacking was true, noting that Malacañang had been known to back-pedal on its policy statements.

“We hope that the replacement will be someone with integrity who has not been tainted with corruption or overpricing of health programs, who puts the health and safety of the Filipino people as a priority amidst the pandemic,” Pangilinan said.

If he were to replace Duque, Senate President Vicente Sotto III said the President should choose someone “with health expertise and (has) no business interests.”