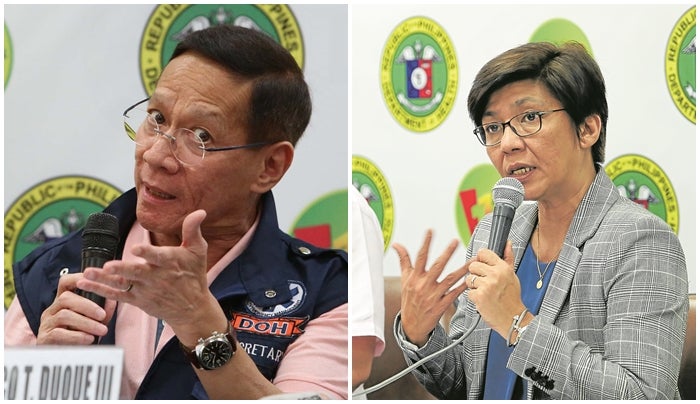 The Department of Health (DOH) on Monday found itself straightening out an astounding claim by Malacañang that the government had already exceeded its end-May target of 30,000 coronavirus tests daily.

Health Undersecretary Maria Rosario Vergeire maintained that to date, the “actual capacity” of all of the DOH’s 42 accredited laboratories nationwide was around 8,500 to 9,500 tests daily.

Vergeire pointed out that the 32,000 tests that presidential spokesperson Harry Roque mentioned in a press briefing was the “estimated maximum capacity” of all the laboratories licensed to test for the new coronavirus that causes the severe respiratory disease COVID-19.

“This is just an estimate based on the number of machines, number of [human resources] and the operating hours per laboratory. The 32,000 is the estimated capacity sans all other factors that may affect operations of laboratories,” she told reporters.

Vergeire said that among the external factors that had affected the operation of the laboratories in the past are the availability of supplies, equipment and infrastructure problems.

For example, the operations of the Philippine Red Cross (PRC) were affected when its equipment were drenched due to “drips in the ceiling” from heavy rains. Similarly, the University of the Philippines’ National Institutes of Health had to slow down after the exhaust for its laboratory broke down.

At his online public briefing on Monday, Roque claimed the government reached its end-May target of 30,000 PCR (polymerase chain reaction) tests per day when “32,100 tests per day” were recorded on May 20.

The DOH’s own data, however, belied Roque’s claim since on May 20, only 8,179 tests were conducted.

Roque later clarified that what he was referring to was the “national testing capacity.”

“Our first step to increasing the number of daily tests conducted is to expand our testing capacity. This means more accredited laboratories and more automated machines so that we are capable of testing up to 30,000 plus per day,” he said in a statement.

But it must be noted that when the DOH earlier set a target of 8,000 tests for end-April, what it counted was not the laboratories’ capacity but the actual tests conducted. In fact, even as laboratories already reached the 8,000 testing capacity days prior, it was only on May 10 that the DOH said it was finally able to conduct 8,000 tests daily.

“With all the many factors affecting our laboratories, we are trying hard to attain the target that has been set,” Vergeire said.

By increasing the country’s testing capacity, the DOH would be able to cover and test more people. Under its current protocol, the department gives priority to four subgroups of people for testing.

First are the severely ill, second are the vulnerable and symptomatic, third are those with mild symptoms, and fourth are the asymptomatic but with exposure to a suspect and confirmed case.

Currently, coverage is limited to the first three subgroups.

There are to date 42 licensed laboratories, eight of which use the GeneXpert automated machines originally designed to test patients for multidrug-resistant tuberculosis. The government aims to increase the number of accredited laboratories to 66 by the end of the month.

To reach that goal, Vergeire said the DOH had designated teams that will “guide and expedite” the licensing of 17 laboratories. Included are two PRC laboratories that she noted have a “huge capacity for testing.”

“In our existing laboratories, we have provided automated extraction machines [that] can lessen time for processing of samples by four hours per run. Also, we have added additional PCR machines in some of the laboratories. Hopefully with these efforts we can be able to expand capacity and reach that target,” she said.