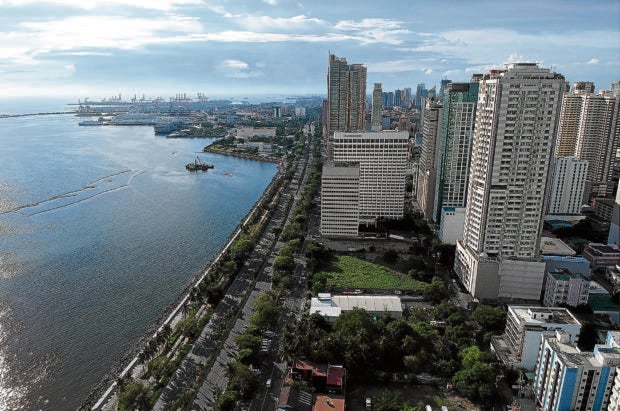 CLEAR AIR Balcony view of Manila’s coastline on Sunday, the 72nd day of the lockdown in the metropolis. The government is considering downgrading the lockdown to a modified general community quarantine starting June 1. —GRIG C. MONTEGRANDE

MANILA, Philippines — The coronavirus lockdown of Metro Manila may be eased further to limit quarantine restrictions to high-risk parts of the metropolis starting June 1 as the government allows more movement and business reopenings to reboot the economy.

The lockdown ends on May 31, but instead of extending it, though allowing more businesses to resume operations, the national government may authorize the local governments to limit the restrictions to parts of their cities with numerous coronavirus cases, a system that will see neighborhoods under varying levels of quarantine.

Local officials have accepted the system since the Metro lockdown’s extension for two weeks from May 16, according to Interior Secretary Eduardo Año.

A critical zone need not be an entire barangay, Año said, as the system could be applied to just a subdivision or a neighborhood in the village with the surrounding areas serving as the containment and buffer zones.

The critical zone would be placed under a “total lockdown,” meaning the residents would be under strict orders to stay at home, except for emergencies, with the local government providing for their daily needs.

“We started this [zoning system] on May 16 and the response of [the local governments and the residents] has been favorable so maybe after May 31 we would continue to implement this,” Año said.

Many of the mayors used to oppose relaxing the quarantine, fearing a resurgence of the new coronavirus that causes the severe respiratory disease COVID-19.

Olivarez said the idea of “pocket lockdowns” was raised during a council meeting on May 9. The system, if implemented, would be “more manageable, more controllable,” he said.

He said the council would hold a meeting on Wednesday to decide on a “single recommendation” to the Inter-Agency Task Force on Emerging Infectious Diseases, the temporary government body overseeing the Duterte administration’s response to the coronavirus crisis.

Decision based on ‘science’

Presidential spokesperson Harry Roque said on Monday that the government would make a decision based on “science.”

“If the data will show a slower case doubling rate and critical care capacity increases, it’s possible,” Roque said, referring to the further easing of the Metro lockdown. “But let’s wait for [the decision of the task force],” he added.

Following up on a statement by Defense Secretary Delfin Lorenzana on Sunday, Año said the further easing of the Metro lockdown after May 31 would depend on the coronavirus trend.

Lorenzana had said the task force would watch the trend this week—increasing or decreasing new cases, single-digit deaths, increasing recoveries—then sit down to decide whether to loosen some more the quarantine restrictions in Metro Manila so that the National Capital Region could expand its phased return to economic activity.

On Monday, the Department of Health (DOH) reported 284 new coronavirus cases, bringing the national tally to 14,319. Majority of the new cases, 171, were reported in Metro Manila.

The DOH said 74 more patients had recovered, raising the number of survivors to 3,323. But the death toll climbed to 873 with the deaths of five more patients.

“We have to open the economy in a smart manner,” Recto said.

Senate Minority Leader Franklin Drilon said the decision to loosen the restrictions some more should have scientific basis.

“The number of [coronavirus] cases may not be doubling, but it is increasing,” Drilon said.

Sen. Panfilo Lacson said the government should consider other sources of credible information and not just the DOH, “whose limitations in handling data may potentially lead to wrong decisions.”

“Considering that the economy is reeling from a prolonged lockdown … it is wise for our policymakers to ease up the restrictions,” Lacson said. “As long as physical distancing and other [public health] protocols are strictly observed and enforced by the authorities, I support this latest plan to allow business activities to resume on a limited scale,” he added.

Sen. Sherwin Gatchalian said the national government had no choice but to ease restrictions on movement and business so that the country could slowly recover from the economic downturn.

Public transport remains suspended in Metro Manila, but more businesses have been allowed to reopen on half their workforce since May 16, after the two-and-a-half-month lockdown was eased. The reopenings include shopping malls, where rules against crowding and loitering are strictly enforced.

On Monday, the Department of Trade and Industry (DTI) said it would recommend to coronavirus task force an “extra set of special guidelines” for beauty salons, barbershops and fast-food restaurants to enable these businesses to resume operations.

The guidelines would include either an accreditation system or a strict operations audit, according to the DTI.

Trade Secretary Ramon Lopez and National Task Force COVID-19 chief Carlito Galvez visited beauty salons, barbershops and fast-food restaurants on Saturday to see how they planned to prevent the spread of the coronavirus if they would be allowed to reopen.

“We saw that these establishments even went further and innovated to ensure the protection of their clients and workers. Based on what we will see in the country’s health progress, if deaths and transmissions continue to go down, maybe we can allow some more to open up,” Galvez said.