MANILA, Philippines —Former Senator Antonio Trillanes IV on Thursday asked if violating quarantine measures would be enough reason for the police to point a gun offenders after a  former soldier was shot dead by a police officer near a  Quezon City quarantine checkpoint.

Former Cpl. Winston Ragos, who reportedly had mental health issues, was shot by Police Mst. Sgt. Daniel Florendo near a quarantine control pointin Pasong Putik Tuesday after the former soldier appeared to draw his firearm from his sling bag. 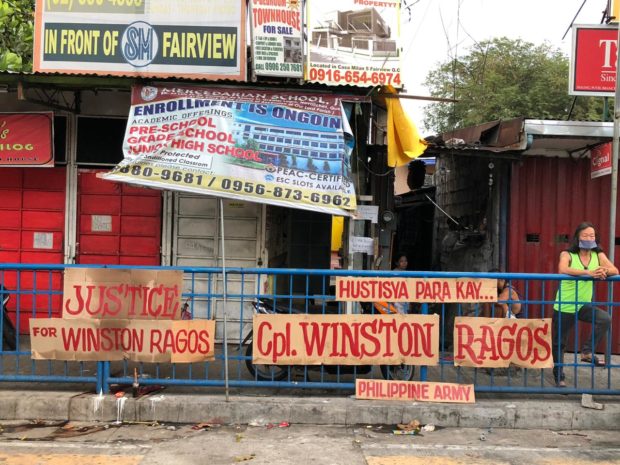 Signs calling for justice for slain former Cpl. Winston Ragos are posted at the site where he was shot in Barangay Pasong Putik, Quezon City last Tuesday. INQUIRER.net / Dennis Maliwanag

(Before we even get to the argument of whether or net he pulled out a gun, what was Ragos’ violation that he was asked to raise his hands and a gun pointed at him?)

(Just because he violated ECQ rules? This will get you in hot water)

The Philippine National Police (PNP) has ordered an investigation of the incident, according to Lt. Gen. Guillermo Eleazar, commander of the joint task force COVID-19 shield.

Eleazar, however, said that what Flores did was an act of self-defense after he saw Ragos pulling out his gun.

Prior to the shooting,  onlookers reportedly told officers that Ragos was suffering from war shock, and insisted that the latter did not carry a firearm.