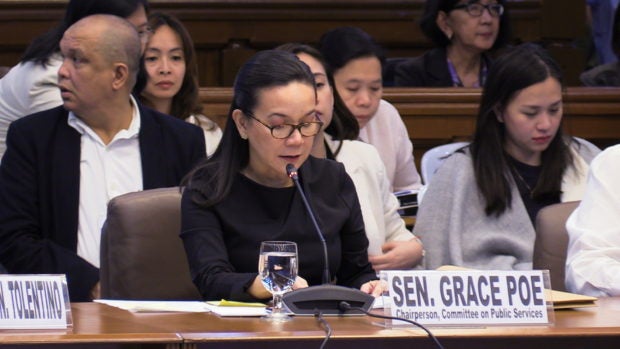 MANILA, Philippines — The Senate on Monday opened its first hearing on the franchise renewal of broadcast giant ABS-CBN, less than three weeks before Congress adjourns on March 14.

Congress adjournment comes more than two weeks before the media network’s franchise expires on March 30, 2020. It will resume its sessions on May 4.

The Senate Public Services Committee, chaired by Senator Grace Poe, started discussions on the broadcast network’s franchise while the House of Representatives has yet to act on pending bills filed before it.

Poe’s panel will also tackle the franchises of six other broadcast companies.

The House leadership, however, earlier questioned this with Speaker Alan Peter Cayetano indicating that the Senate panel’s hearing on ABS-CBN’s franchise would go against the Constitution.

Cayetano had argued that local bills, like those seeking for the renewal of the network’s franchise, should first emanate from the lower chamber before it can be tackled in the Senate.

Poe, however, said her panel would not yet release a report on the matter until the lower chamber approves a similar measure and is transmitted to the Senate.

Senators also defended the said hearing, saying that it does not violate the Constitution and that the upper chamber is merely performing its oversight functions.

This developed after Solicitor General Jose Calida filed a quo warranto petition before the Supreme Court seeking the revocation of ABS-CBN’s franchise due to alleged violations.

Calida also filed a motion before the high court to prevent ABS-CBN and concerned parties from discussing the petition he filed against the media giant.

Read Next
NUJP hands over 200K signatures to Senate calling for swift action on ABS-CBN franchise
EDITORS' PICK
SMDC’s Bloom Residences: A master planned community that cares for your health and wellness
Upsilon, Unilever give ‘real talk’ on climate change crisis
EDITORIAL: Partial relief
At least 1.04 million Metro Manila residents may have COVID-19 – OCTA Research
Cebuanos’ devotion to Sto. Niño remains strong amid pandemic, typhoon
Over 3 Million worth of prizes to be won at Smart Padala’s SENDali Manalo Promo!
MOST READ
At least 1.04 million Metro Manila residents may have COVID-19 – OCTA Research
‘Not my loss’: Did Kris Aquino just comment on her breakup with Mel Sarmiento?
Wendell Ramos finally gets to hold his newborn for the 1st time
Tito, Vic and Joey still not quitting, breaking trends as they celebrate 50th year in the biz
Don't miss out on the latest news and information.