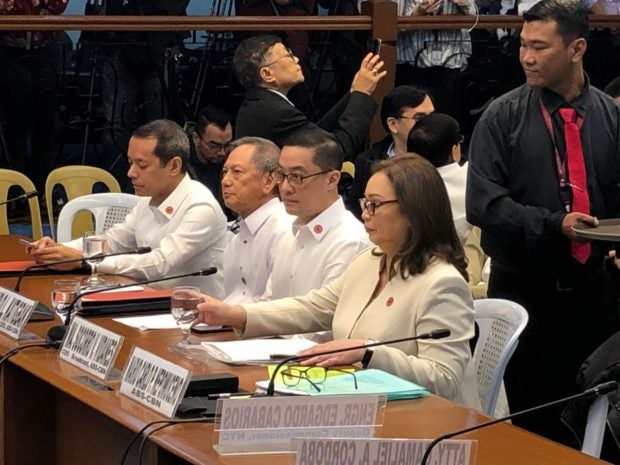 Top ABS-CBN officials appear at Senate committee on public services’ hearing on its compliance with its own franchise. MAILA AGER / INQUIRER.net

MANILA, Philippines — Top ABS-CBN officials appeared on Monday at the Senate committee on public services’s hearing on the renewal of its franchise, which is set to expire on March 30 this year.

Congress is set to adjourn its sessions on March 11, or two weeks before the expiration of the franchise of ABS-CBN.

Among those who showed up at the Senate are ABS-CBN chairman Martin Lopez, president and CEO Carlo Katigbak, and COO Ma. Socorro “Cory” Vidanes.

Other government officials, including Justice Secretary Menardo Guevarra and officials from the Securities and Exchange Commission, Bureau of Internal Revenue, Philippine Competition Commission, National Telecommunications Commission, as well as representatives from various organizations were also invited to the hearing.

Poe decided to push through with the hearing despite Speaker Alan Peter Cayetano’s claim the hearing would be in violation of the Constitution.

Cayetano asserted the franchise bills should emanate from the House of Representatives.

Poe earlier said her committee will not release a report until the franchise bill of ABS-CBN is approved by the House.

Until now, however, the House has yet to hold a hearing on the network’s franchise.

Solicitor General Jose Calida has also filed a quo warranto petition against the franchise of ABS-CBN.

Aside from the petition, Calida also asked the court to gag the involved parties from making statements on the issue.