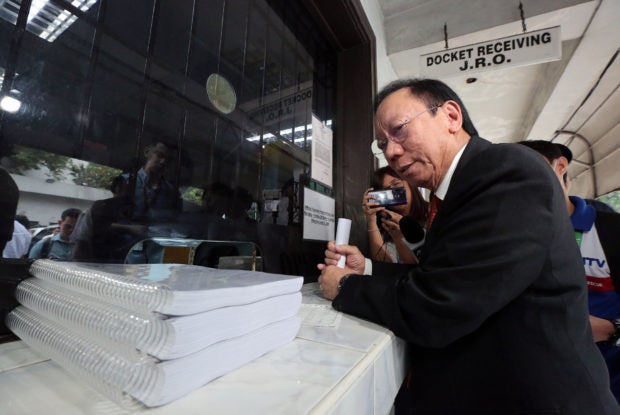 MANILA, Philippines — As if the inaction of the House legislative franchises committee on bills seeking to extend the franchise of ABS-CBN Corp. were not enough, the media conglomerate is facing a petition filed by Solicitor General Jose Calida in the Supreme Court for the cancellation of its 25-year franchise.

The franchise is set to lapse on March 30.

Through a quo warranto petition, the government’s chief lawyer on Monday said the high court should forfeit the congressional franchise of ABS-CBN and its subsidiary, ABS-CBN Convergence Inc., for violating its terms and the Constitution.

A quo warranto (Latin for “by what warrant or authority?”) is a legal procedure used to challenge an individual’s right to hold a public or corporate office or to revoke a corporation’s charter.

It was Calida who filed the quo warranto petition that the Supreme Court used to oust Chief Justice Maria Lourdes Sereno two years ago.

The fresh assault on ABS-CBN shaved 1.76 percent off its share price to push it down to P16.70 on Monday, down 72 percent from P59.50 in the quarter just before President Rodrigo Duterte assumed power in 2016.

“While it is true that broadcasting is a business, the welfare of the people must not be sacrificed in the pursuit of profit,” he added.

He also claimed the media giant violated the constitutional prohibition on foreign ownership of media when it issued Philippine Depositary Receipts (PDRs) to foreigners through ABS-CBN Holding Corp.

“We want to put an end to what we discovered to be highly abusive practices of ABS-CBN benefiting a greedy few at the expense of millions of its loyal subscribers. These practices have gone unnoticed or were disregarded for years,” he said in a statement.

ABS-CBN maintained that it was complying with all the laws governing its franchise and had secured all government and regulatory approvals for its business operations.

“We reiterate that everything we do is in accordance with the law. We did not violate the law. This case appears to be an attempt to deprive Filipinos of the services of ABS-CBN,” it said in a statement.

When he filed the petition, Calida refused to be interviewed by reporters but scolded an ABS-CBN reporter for stories about the Office of the Solicitor General (OSG) that he apparently did not like.

On a TV5 news program, Calida said ABS-CBN’s franchise could be taken up separately by Congress and Supreme Court.

“Better late than never. Pag mali, mali talaga yan (What is wrong is wrong),” he said when asked why he filed the petition when the franchise was about to expire next month.

So far, the House of Representatives has not held any committee hearings to tackle the renewal of ABS-CBN’s franchise.

Last December, President Duterte declared that he would see to it that ABS-CBN’s franchise would not be renewed.

Since assuming office in July 2016, he has been denouncing the TV network for not airing his campaign ads even if he had paid for them.

Calida claimed ABS-CBN issued PDRs to foreigners in violation of Article XVI Section 11 of the Constitution that limits ownership and management of mass media only to Filipino citizens.

ABS-CBN countered that the PDRs had been evaluated and approved by the Securities and Exchange Commission and the Philippine Stock Exchange before their public offering.

“These are the same instruments used by other broadcast companies to raise capital for the improvement of services,” it said.

PDRs are a way for media companies to raise money from foreign investors, which can benefit via dividend payments, without being assigned voting rights that regular common shares have.

The company’s PDRs are issued by a separate firm, ABS-CBN Holdings, which remains the registered and beneficial owner of the ABS-CBN shares covered by the PDRs. ABS-CBN Holdings also retains the voting rights of those shares.

“The ABS-CBN shares are still subject to ownership restrictions on shares of corporations engaged in mass media and ABS-CBN may reject the transfer of shares to persons other than Filipino nationals,” ABS-CBN explained in its annual report.

“Remember that GMA Network also has PDRs. Will they question these as well?” he said in an interview on Monday.

Calida also pointed out in his petition that ABS-CBN Convergence Inc. “resorted to an ingenious corporate layering scheme in order to transfer its franchise without the necessary congressional approval.”

“It also failed to publicly offer any of its outstanding capital stock to any securities exchange within the Philippines within five years from the start of its operations, which is an indispensable condition in its franchise,” he said.

The conglomerate said the ownership of ABS-CBN Corp. and ABS-CBN Convergence “was undertaken under the same law and structures that have been utilized by other telecommunications companies. These are transfers that are approved under the Public Telecommunications Policy Act and are fully compliant with law.”

Over the years, the network has expanded its businesses to cable TV, international distribution, mobile services and magazine publishing. As of 2017, ABS-CBN had more than 60 subsidiaries.

The loss of its franchise would have a significant impact on ABS-CBN’s revenues and consequently, its thousands of employees

Pangilinan, however, expressed wariness over angering Malacañang given Duterte’s public calls to shutter ABS-CBN.—With a report from Inquirer Research