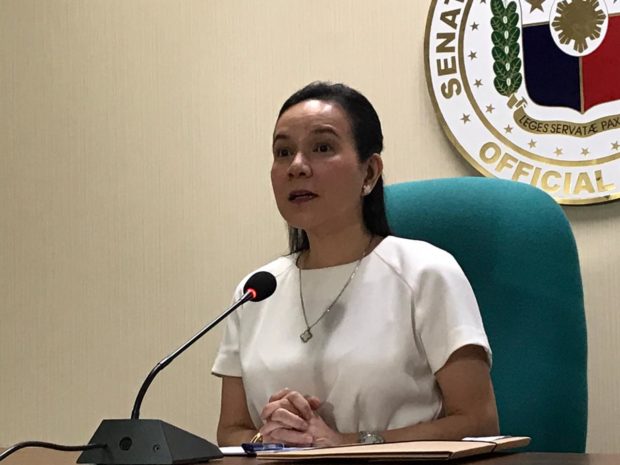 Senator Grace Poe talks about starting a hearing on the franchise of ABS-CBN during a press briefing on Monday, February 17, 2020, at the Senate. Poe is the chair of the Senate committee of public services. INQUIRER.net photo / Christia Marie Ramos

MANILA, Philippines — The Senate public services committee will start its hearing on the franchise renewal of ABS-CBN as lawmakers at the House of Representatives remain unable to tackle the matter.

Senator Grace Poe made the announcement in a press briefing at the Senate on Monday.

The senator earlier filed a resolution, which seeks to look into “the operations of ABS-CBN Corporation to determine compliance with the terms and conditions of its franchise under Republic Act No. 7966.”

(We all know that when it comes to other things, especially if this needs to be passed already, like the budget, taxes, simultaneous hearings were conducted, in the House and in the Senate even if there’s yet a transmittal from Congress we are already conducting a hearing here).

(Our committee will not submit a committee report on the issue until we have not yet received the House’s version of the bill).

According to Senate Majority Leader Juan Miguel Zubiri, Poe’s committee will tackle the franchise renewal of ABS-CBN on February 27.

Poe, meanwhile, clarified that her decision to proceed with tackling the franchise renewal of ABS-CBN is not meant to prod the lower chamber of Congress.

“My intention is not to pressure them to do anything that is against their will because that’s their right,” she said.

“On the other hand, as a lawmaker and as a citizen, we expect our representatives to act on our behalf in a timely manner,” she added.

The senator, nevertheless, expressed hope that the House would already act on the pending bills.

“It is our hope that they will act on it already because as we know the franchise of ABS-CBN will end this march. However, it’s the prerogative of the House whether or not they will hear it,” Poe said.

“But in the case of the Senate, I think we should be able to exercise our mandate, otherwise, we are not fulfilling our responsibility,” she added.

But the senator said that even if the Senate finishes its deliberations on the broadcast network’s franchise renewal, it will remain pending unless the House acts on it.

(Nothing will still happen, that’s the bitter truth.)

(But maybe, it’s free to dream, Congress (House) might finish tackling the bills because we’ve seen them pass measures if they really want to, right? What if they shock us and transmit the bill, ‘Here’s the bill,’ and then we still haven’t started our hearing yet…and suddenly it’s now the Senate’s fault because we still haven’t conducted a hearing.)

If the network’s franchise is not granted, it would have to close down its TV and radio operations by March 30, 2020.

Senate President Vicente Sotto III and Isabela Rep. Antonio Albano, vice-chair of the House legislative franchise committee, earlier said the network could still operate as long as bills for the extension of its franchise are pending.

During Monday afternoon’s Senate session, the joint resolution filed by Senate Minority Leader Franklin Drilon that seeks to extend ABS-CBN’s legislative franchise until 2022 has been referred to Poe’s committee so that it can also be tackled in the upcoming hearing.

Drilon moved to refer his joint resolution to the Senate public services committee and no senator objected to the motion, according to Zubiri who chairs the Senate Committee on Rules.

“If there is no objection, it is so-referred to the Committee on Public Services,” said Sotto, who presided over the session.