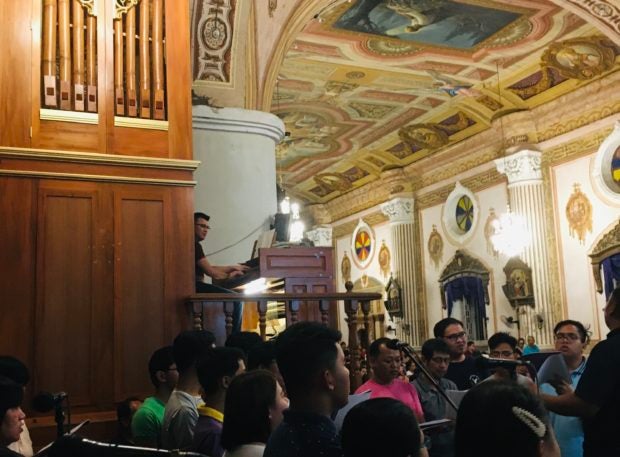 MUSICAL TREAT Residents attending “simbang gabi” (dawn Masses leading to Christmas) at Betis Church in Guagua, Pampanga, are in for amusical treat with a local choir singing to the accompaniment of the country’s second bamboo organ.
PHOTO BY TONETTE OREJAS

Rey Manlutac played it to accompany the Betis Music Ministry, a group of five choirs that sang Kapampangan and Latin liturgical songs and hymns for the Mass celebrated by Fr. Raul delos Santos.

“We’re giving it a break-in,” Delos Santos said at the start of his homily, referring to the musical wonder that towered 4.6 meters.

It was only 50 percent complete when it was first used before the jam-packed crowd, according to Cealwyn Tagle, founder of Diego Cera Organbuilders Inc., which maintains all pipe organs in the country, including the one at Manila Cathedral.

The organ in Betis is being built at least 195 years after Cera completed the original bamboo organ in St. Joseph Parish Church in Las Piñas City.

“We still have to install the main pipes [at the upper division] and fine tune [the other pipes] to create the best clarity and timbre,” said Tagle, 47.

Belgian missionaries sent him on a scholarship to Austria before 1994 to train in organ building.

Manlutac, 21, was happy even with the incomplete work. “It sounded well,” he said. But he said his legs got tired because the organ has no volume pedal.

But the new organ is early for the 500th anniversary of the Christianization of the country in 2021, said Dr. Miguela Santiago, director of Mirabilia Dei Foundation Inc. (MDFI), which is undertaking the project aimed at “deepening the faith through liturgical music.”

The Betis church, a national cultural treasure, is likened to the Sistine Chapel in the Apostolic Palace, the official residence of the Pope in Vatican City, because the teachings of the Bible are taught in its walls, ceilings and even the main entrance door.

Betis is also home to Barangay Sta. Ursula, a community of sculptors.

Masses for baptism, wedding, funeral and other rites inside the 400-plus year-old church got in the way of fine-tuning schedules, Santiago said.

In one particular day, nine funeral Masses were held, she added.

Tagle said they had been working into the night to install more fine notes. That means they have to combine a set of pipes and arrange it.

The bamboo poles were sourced locally, receiving also modern preservation treatment so they would last a long time from the elements and insects.

Documents from Vatican II cited pipe organs as “best instruments,” according to MDFI musical director, Msgr. Greg Canlas. He said having the bamboo organ was like welcoming back Padre Cera who was parish priest of Mabalacat in northern Pampanga from 1794 to 1797.

Betis was a Muslim settlement downstream of the Pampanga River before Augustinian missionaries converted it into a Catholic community in 1572.

Betis has produced many priests, including Bishop Pablo Virgilio David of the Diocese of Kalookan.