Palace: Duterte now in ‘green of health’, not pink 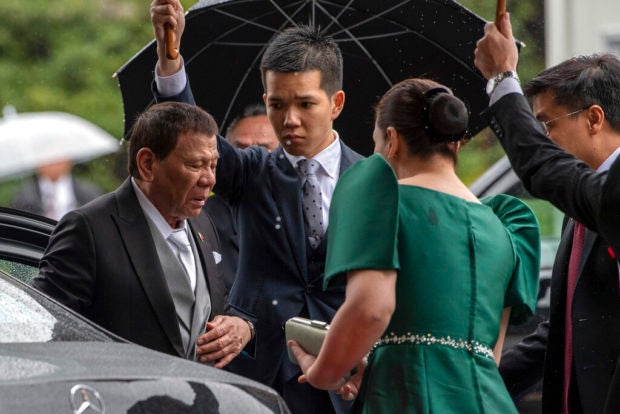 In this file photo, President Rodrigo Duterte arrives to attend the enthronement ceremony of Emperor Naruhito of Japan at the Imperial Palace on Tuesday, October 22, 2019, in Tokyo. Duterte decided to cut short his Japan trip after complaining of “unbearable” back pain. On Sunday, November 17, 2019, presidential spokesperson Salvador Panelo says the President is not in the “pink of health” now as he is in the “green of health”. (Carl Court/Pool Photo via AP)

MANILA, Philippines — President Rodrigo Duterte is not in the “pink of health” now because he is in the “green of health,” Malacañang has declared.

Presidential spokesperson Salvador Panelo admitted Sunday that the Chief Executive is “not normal” anymore because of his various ailments, agreeing to what Duterte earlier confessed in a television interview that he is suffering from different disorders due to his advanced age. Duterte is now 74 years old.

Instead, Panelo described Duterte’s state of well-being today as “green of health.”

When asked to explain further, Panelo implied that “green of health” is a lower stage compared to “pink of health” – which means a physical condition is at its peak.

“Hindi na pink, green lang (No longer pink but just green).  Which is kung ano ‘yong sakit ng matatanda sa edad niya (whatever sickness a person his age has), ordinarily he has that,” he noted.

READ: Duterte in the pink of health, Andanar assures

There were speculations and questions about Duterte’s state of health especially after several incidents where he skipped certain engagements due to minor illnesses.  The most recent of which was his trip to Japan, which he decided to cut short after complaining of “unbearable” back pain.

Duterte had previously admitted he has Buerger’s disease, an ailment where blood vessels thicken and are prone to clotting.  He blamed his heavy-smoking during his younger years for it.

Despite these ailments, Panelo said Duterte would continue to work and would push through with his visit to Busan in South Korea for the Association of Southeast Asian Nations (Asean) Commemorative Summit.

“But, if you will notice kahit na ganyan siya, may nararamdaman, ‘yung kanyang schedule ganyan pa rin hindi naman nababago eh (even if he’s like that, not feeling well, his schedule stays the same, unchanged).  Not only does he survives, (but) he also does it well,” he said.