Duterte admits he has 4 ailments 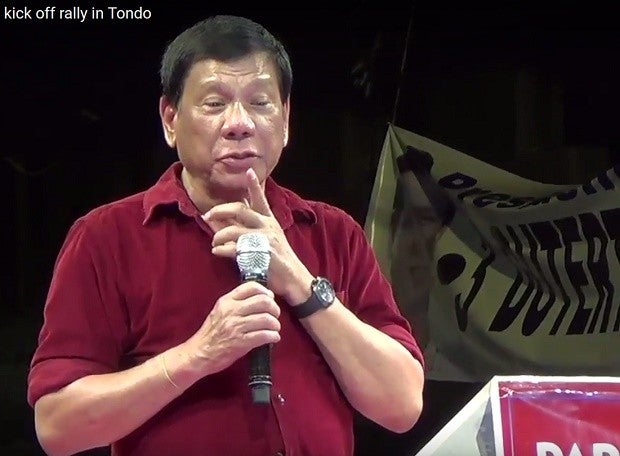 “I have no cancer. I have four illnesses but they are not fatal,” presidential candidate Rodrigo Duterte said on Friday.

Duterte, 70, faced reporters a day after he was rumored to have suffered a stroke while campaigning in Quezon City.

His camp said Duterte had an attack of migraine on Thursday and had to skip addressing a medical convention at Crowne Plaza hotel on Ortigas Avenue.

The combative mayor of Davao City told reporters that he was confined overnight at Cardinal Santos Medical Center in Greenhills, San Juan City, for a severe migraine.

He said he was diagnosed to have a respiratory infection, which triggered a headache, nausea and vomiting.

“I did not know I have acute bronchitis. I was told to rest and take antibiotics,” Duterte said.

But definitely he was not downed by a stroke and neither does he have cancer, he said.

He said he had a slipped disc from a motorcycle accident 10 years ago. He also has Barrett’s esophagus, which involves tissue lining the esophagus, and Buerger’s disease, a constriction of the blood vessels caused by accumulation of nicotine.

Now he has acute bronchitis.

But none of his four ailments is life-threatening, the PDP-Laban standard-bearer said.

“I am well. Do not worry about my health. Worry about yourselves so you can vote for me,” Duterte said, addressing his supporters.

Asked if he was willing to release his medical records, Duterte declined, saying he was not crazy.

“I will release them if Mar Roxas will show he is circumcised,” he said, referring to the ruling Liberal Party’s standard-bearer with whom he has had angry exchanges.

There was no immediate comment from Roxas or his camp.

Roxas, 58, said on Wednesday he was open to the idea of disclosing his medical records to prove his fitness for the presidency.

The proposal for all presidential candidates to disclose their health records came after former diplomat Roy Señeres died on Monday, three days after dropping his campaign for Malacañang for health reasons. He died of complications from diabetes.

Binay, 73, oldest of the five candidates contesting the race for Malacañang, said he was strong probably because he had been raised in poverty.

Sen. Miriam Defensor-Santiago, 70, presidential candidate of the People’s Reform Party, has said she had licked cancer of the lungs.

But Santiago has refused to disclose her medical records, saying they were nobody’s business.

Duterte said his doctors advised him to rest for two to three days, which forced him to cancel his campaign events on Friday and today (Saturday).

But he will definitely attend a Kingdom of Jesus Christ event in Buhangin, Davao City, with Pastor Apollo Quiboloy on Sunday, he said.

Duterte, who is tied for second place with Binay and Roxas in the latest Pulse Asia voter preference poll, admitted that his resistance weakened due to the rigors of the campaign, which started on Tuesday.

“I will rest for a while, as my doctor advised, but I will resume my campaign soon,” he said.

Duterte’s common-law wife, Cielito Avanceña, who flew to Manila on Thursday night to be with him, said no dietary restrictions were imposed on the mayor.

Avanceña said Duterte gave up the bottle and quit smoking years ago.

Laviña assured the public that Duterte is fine and just needs to rest to regain his strength.

“Duterte has been very frank and open about his health. He has gone through a lot over more than a year of listening tour and leading up to this campaign and he has exhibited high spirits,” Laviña said.

“This is a clear proof of his ability and capability to continue his quest for genuine change, for a better life for our fellow Filipinos here and abroad,” he said. With reports from Inquirer Research and Karlos Manlupig, Inquirer Mindanao

Duterte to take things easy a day after experiencing migraine