Senators urge Filipinos to pray for Mindanao after series of quakes 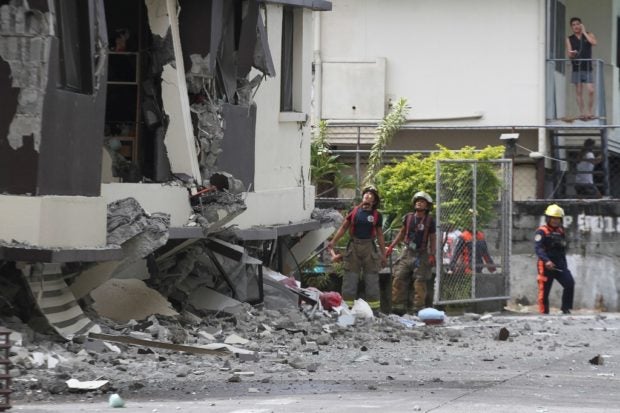 Rescuers look at the damaged condominium building after a 6.5-magnitude earthquake hit Davao City in the southern island of Mindanao on October 31, 2019. A powerful quake struck in the southern Philippines on October 31 sending people fleeing from homes, schools and malls, with initial reports of damage to some buildings. (Photo by Manman Dejeto / AFP)

MANILA, Philippines – Senators have urged Filipinos to join them in praying for the people of Mindanao after a series of earthquakes struck parts of southern region, the latest registering a magnitude of 6.5 on Thursday morning.

Senators Koko Pimentel, Joel Villanueva, and Sonny Angara all offered words of encouragement and sympathy for the people affected by the movements.

“Our prayers and thoughts are with the people of Mindanao during this most challenging time when earthquakes strike the area time and again,” Pimentel, who hails from Mindanao, said in a statement.

“Prayers for our Kababayans in Mindanao.  Stay calm and safe.  God bless the Philippines,” Villanueva added.

Our kababayans in Mindanao need our prayers guys 🙏🏽 #earthquake https://t.co/lvJWBMIMhq

Pimentel meanwhile asked the national government to assist local governments affected by the earthquake, which was the third to strike in just two weeks, and the second in three days.

“We call on national government agencies to provide full support to all local government units in Mindanao which are trying to cope with the situation. Tap the calamity and other contingency funds for the benefit of the people,” he said.

On the other hand, Senator Richard Gordon, who also chairs the Philippine Red Cross, said that they have already dispatched teams to assist people in evacuation centers especially in Kidapawan City in Cotabato — one of the badly-hit areas.

“We are all in this together.  Our team has started distributing hot meals at Balabag Brgy. Hall in Kidapawan City which serves as evacuation center to 400 earthquake-affected individuals. Kudos team for this initiative!” Gordon said in a separate tweet.

WE ARE ALL IN THIS TOGETHER. Our team has started distributing hotmeals at Balabag Brgy Hall in Kidapawan City which serves as evacuation center to 400 earthquake affected individuals. Kudos team for this initiative! pic.twitter.com/KNwOy89xyN

Aside from this magnitude 6.5 earthquake, which hit 33 kilometers northeast of Tulunan town in Cotabato, a magnitude 6.4 movement was also recorded on Tuesday.

The Philippine Institute of Volcanology and Seismology (Phivolcs) has warned of possible aftershocks as the latest quake was found to be part of an interlaced events from active faults in the area. /jpv