PARAÑAQUE CITY, Philippines — When Jun Antolin learned of his parents’ “pamana” (inheritance), he was not surprised. After all, he and his five siblings grew up cleaning tombs and taking care of mausoleums to earn a living.

Still, the 32-year-old father of three knew he had to cherish this job to save his family from hunger. So on the eve of All Saints’ Day, Antolin, along with his wife and children and brothers, set out early for Manila Memorial Park to do the job their parents had entrusted them to do.

(In reality, if you just depend on this job and you have a family and a few mausoleums to tend, you and your family will be hungry. That’s why you have to find ways to make ends meet.)

According to Antolin, he earns P1,500 a month for taking care of a Chinese family’s mausoleum. Since his earnings are not enough, he juggles being a painter in a construction site and a cleaner in the private cemetery.

Some of his bosses are generous, he noted, and pays their dues on time or in advance. Still, he added, there are others who tend to ignore them after the work was done. But he knew this was part of the hard reality that comes with an informal job like his and other cleaners and caretakers in the burial ground.

(Some mausoleum owners would tell us they’d return, but they never do… That’s life, we have to be strong so we can put food on our table.) 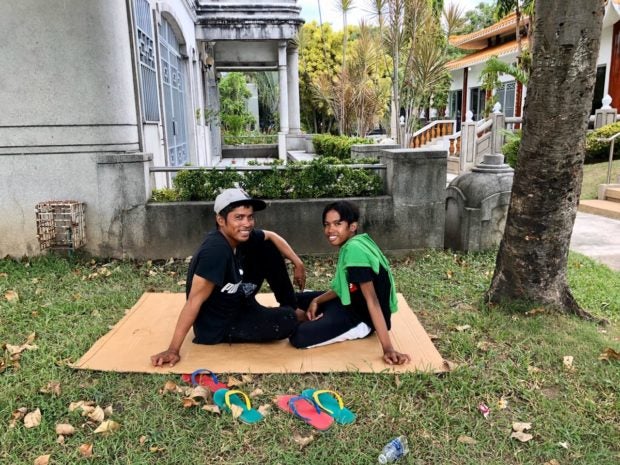 Mausoleum caretaker Jun Antolin takes a short break with his eldest son after cleaning their area at the Manila Memorial Park on Thursday, October 31, 2019. Pathricia Roxas/INQUIRER.net

Surprisingly, Antolin remains grateful and happy. For him, what’s important is that he’s with his family today and gets their income from a decent job.

(If you won’t persevere, my children will inherit the life that I have now… I don’t mind getting tired all day, as long as my work is decent.)

Amid the hardships, Antolin never ceases to dream and he said his only two aspirations in life are simple: 1) to see his children finish school, and 2) to have enough money to buy a water pump so they could easily get water for cleaning.

Pressed for any appeal to the cemetery administrators or the government, he simply said: “Wala naman (Nothing).”

(As long as we have an honest and decent job, it will be fine, even if it’s unfair.)
/kga