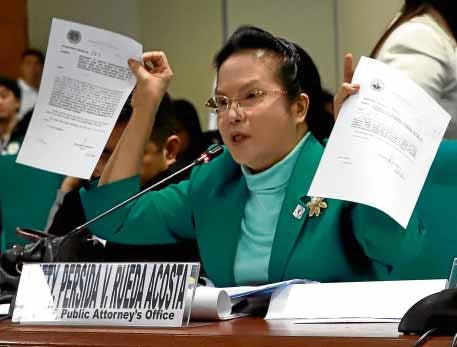 DBM’S CREATION Public Attorney’sOffice chief Persida Acosta, speaking in a budget hearing at the Senate onMonday, defends the legality of her forensic laboratory, saying it was created by the Department of Budget and Management. Senate Minority Leader Franklin Drilonwants to defund the laboratory to eliminate a duplication of the functions of the crime labs of theNational Bureau of Investigation and the Philippine National Police. —SENATE PHOTO

MANILA, Philippines — The forensic laboratory of the Public Attorney’s Office (PAO) has no legal basis for its existence and only duplicates the functions of the crime laboratories of the National Bureau of Investigation and the Philippine National Police, according to Minority Leader Franklin Drilon, who wants to defund it in the 2020 budget.

Drilon grilled PAO chief Persida Acosta on the legal basis for having a forensic laboratory during budget deliberations on Monday night.

Acosta defended the laboratory, saying it was authorized by the Department of Budget Management (DBM).

Acosta also said the PAO needed the laboratory for investigating torture cases and deaths being linked to the Dengvaxia vaccine, and for the defense of the accused in criminal cases.

“It is my view that the forensic laboratory is a clear duplication of the functions of the NBI and the police who have not been shown to be inefficient and incompetent and are the primary investigative arm of the government,” Drilon said.

“The fact that there is a forensic laboratory [in the PAO] exposes us to situations where there could be conflicting findings from two government offices,” he added.

He said this was why, at the appropriate time, he would introduce a motion to remove the P19.5-million budget of the forensic laboratory and transfer the fund to the NBI, which, like the PAO, is under the Department of Justice.

Drilon also chided Acosta, saying the PAO wanted to be the NBI by putting up its own forensic laboratory.

“You want to be both doctor and policeman,” he added.

Drilon said the existence of the forensic laboratory had no legal basis because it was only created by an allocation in the General Appropriations Act.

He said the budget secretary “is not God” and cannot create an office because only a law can do that.

“It’s questionable to me because it must be substantive law that must create the office and not merely a General Appropriations Act,” he told reporters.

If an office can be created only by a budget provision, then the office could be abolished anytime by defunding it, he added.

Still, this could set a dangerous precedent because any lawmaker would be able to add an insertion to the budget to create an office that must be funded every year, he said.

Drilon also said he did not believe that the NBI was too busy to handle PAO cases, as Acosta had claimed.

But if this was the case, then the solution was to give more funds to the NBI’s forensic team, he said.

He also took note that the PAO’s handling of the Dengvaxia controversy had been blamed for the fear of vaccines among parents that led to the rise of measles and dengue cases in the country.

“The common concern in the medical profession and the health department is the loss of confidence is principally attributable to all the noise created by the PAO,” he said.

But Acosta said the Department of Health (DOH) had been remiss in distributing vaccines for measles and polio.

She also told the senators that the forensics office was created and funded by the DBM.

And according to her, the DBM may approve minor changes in the organizational structure and staffing patterns of the agencies and create positions up to division chief.

She also said the creation of the forensic laboratory was related to the directive of former Secretary Vitaliano Aguirre II to provide legal services to the families of children who had died of dengue and who had also been inoculated with Dengvaxia.

The PAO had to conduct forensic autopsies, she said.

Drilon said Aguirre’s directive was only to provide legal services, and added that the PAO could have just tapped the services of the NBI.

Acosta said the NBI had a lot on its plate.

During the hearing, Drilon and Sen. Sonny Angara called out Acosta several times for her answers that were wordy but not responsive to the questions.

Also on Tuesday, DOH medical specialist Anthony Calibo told the Senate health committee that the department’s immunization program is hobbled by the lack of people to educate the public in the importance of vaccination amid rising cases of dengue and measles.

For dengue alone, close to 300,000 Filipinos have been infected with the mosquito-borne disease and nearly 1,200 have died, according to the DOH.

It says it does not see the number of cases tapering off until end-November.

“We will work with the DOH to find the short and long-term solutions to improve the immunization program and increase the coverage of immunization for polio, measles and other preventable diseases,” Go told reporters after the hearing. —With a report from Jovic Yee