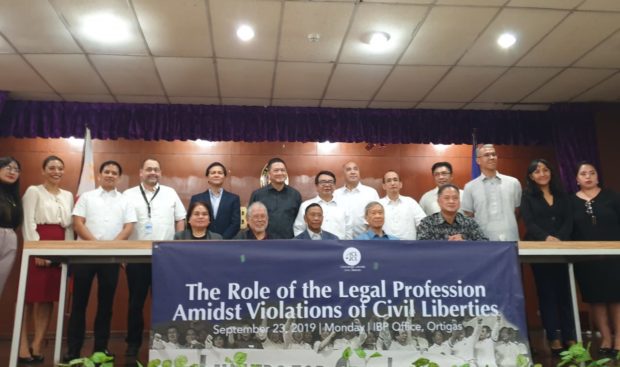 MANILA, Philippines — An alliance of lawyers formed to defend civil liberties during the presidency of Gloria Macapagal-Arroyo in 2006 has been revived amid what it described as the “specter of tyranny plaguing the nation.”

“Not since the dark years of martial law have our civil liberties and fundamental rights been threatened and blatantly violated with such brazen impunity,” read the statement of unity of the Concerned Lawyers for Civil Liberties (CLCL), which was relaunched on Monday at the Integrated Bar of the Philippines (IBP) headquarters in Pasig City.

The group pledged to challenge a wide range of President Rodrigo Duterte’s policies that, it said, had weakened freedom and stifled dissent.

Former Vice President Jejomar Binay, IBP national president Domingo Cayosa, and current and former law deans of Adamson University, the University of the Philippines and Ateneo School of Government are also among the CLCL’s conveners.

Among the groups that make up the revived CLCL are the IBP, National Union of Peoples’ Lawyers (NUPL), Artikulo Tres and Manananggol Laban sa Extrajudicial Killings.

When it was first formed in 2006, the CLCL became the broadest network of lawyers in the Philippines, with Supreme Court Associate Justice Marvic Leonen, former Solicitor General Joel Cadiz and Commission on Human Rights Chair Chito Gascon among its leaders.

The lawyers’ alliance fought against then President Arroyo’s most controversial policies, including the imposition of emergency rule and Charter change, which it challenged at the Supreme Court.

CLCL lawyers who spoke at the relaunch indicated that they would confront the President with a similar zeal, and mentioned martial law, the West Philippine Sea territorial dispute and extrajudicial killings as some of the issues they are most concerned with under this administration.

The statement of unity signed by the new CLCL members pledged to organize lawyers to express opposition to “actions that violate constitutional rights and civil liberties,” provide legal support in major issues, and hold protest actions.

“We have to remind the President … that there is such a thing as freedom of expression, freedom of assembly and freedom to petition government,” Colmenares said. “We achieved victories against Arroyo then; we will persevere and continue to struggle for civil liberties now.”

“With the stifling of dissent, everyone or many are afraid to express a contrary opinion,” said the CLCL convener, Ateneo Human Rights Center executive director Ray Paolo Santiago. “It kills our freedom, it kills our democracy.”

The revival of the lawyers’ group came amid attacks on the profession under the Duterte administration, an issue that was the subject of an international fact-finding mission here in March.

On Monday, just hours before the relaunch, NUPL member Criselda Heredia, an antimining activist and human rights lawyer, was ambushed in Roxas City, Capiz, by armed men in at least one motorcyle. She survived with minor injuries.