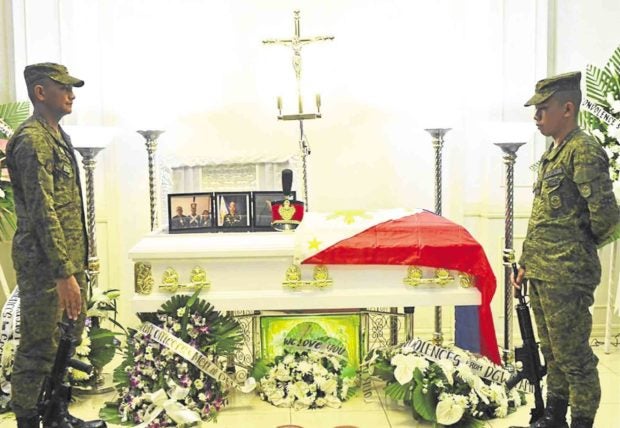 JUSTICE BEING SERVED The Philippine Military Academy and the Baguio City Police Office are preparing the charges to be brought against the people behind the fatal hazing of Cadet 4th Class Darwin Dormitorio, whose body lies in state at a funeral parlor in Cagayan de Oro City. —JIGGER J. JERUSALEM

Lt. Gen. Ronnie Evangelista, the PMA superintendent, and Brig. Gen. Bartolome Bacarro, the commandant of cadets, stepped down after the completion of the investigation into the death of the 20-year-old plebe.

Evangelista announced his and Bacarro’s resignations at a news conference in Fort del Pilar in Baguio City on Tuesday morning.

Bacarro later told reporters by phone that his and Evangelista’s resignations were intended to “save the organization” and not signify admission of lapses.

Gen. Benjamin Madrigal Jr., the outgoing chief of staff of the Armed Forces of the Philippines, accepted their resignations.

Dormitorio was hospitalized three times before dying from hazing injuries on Sept. 18.

The PMA banned hazing in 1997. The most prominent case of hazing in the country’s premier military school ended in the conviction of two cadets in 2001.

Evangelista said the investigation of Dormitorio’s death had been completed.

“All the reports for administrative and criminal cases are now finished and prosecution procedures [have] commenced. The last act that this great military institution demands is for the leaders to take responsibility [for] what happened,” he said.

“In the military tradition of command responsibility, it is now the proper time for me as the head of the institution, together with the commandant of cadets, to relinquish our respective positions,” Evangelista said, assuring reporters that no one had pressured him to resign.

Presidential spokesperson Salvador Panelo, who said on Monday that Evangelista should resign if he did not know what was going on in the PMA, described the general’s move as “genuine delicadeza.”

Cagayan Rep. Rufus Rodriguez, who had also called for Evangelista’s resignation, on Tuesday said stepping down was “the right thing for him to do.”

Rodriguez said President Rodrigo Duterte and the military should now look for someone to take Evangelista’s place.

“Another good officer wasted, his career, because of that incident,” Sen. Ronald dela Rosa, a PMA graduate and former chief of the Philippine National Police, said, explaining that he knew Evangelista and that the general had taken steps to keep hazing out of the academy.

He said Cadet 1st Class Christian Correa, Dormitorio’s platoon leader, and Cadet 1st Class Elbert Lucas, the company commander, were suspended. They would not be allowed to graduate from the academy next year.

Cadet 1st Class Irvin Sayud, the floor inspector of Mayo Hall, where Dormitorio had his quarters, was given various demerits and ordered confined for more than 100 days.

Bacarro said four other PMA officials had been relieved: Maj. Rex Bolo and Capt. Jeffrey Batistiana, the tactical officers who had direct supervision over Dormitorio; Capt. Cesar Candelaria, commander of the PMA Station Hospital, and Capt. Flor Apostol, a physician at the hospital.

The school did not disclose details of the hazing that led to Dormitorio’s death, as the cases that would be filed against the upperclassmen were still being prepared.

Col. Allan Rae Co, chief of the Baguio City Police Office, said the testimony of nine cadets who had witnessed the hazing of Dormitorio was submitted to the city prosecutor on Tuesday afternoon.

Co said the police were waiting for a brother of Dormitorio to arrive in Baguio to file the charges on behalf of the family.

Defense Secretary Delfin Lorenzana had ordered all plebes in the academy to be put through medical examination for signs of hazing.

Bacarro said a number of cadets had been confined in the hospital, but he still had to determine if they belonged to Dormitorio’s class.

Two cadets are being treated at the AFP Medical Center in Manila, he said. —With reports from Julie M. Aurelio, Leila B. Salaverria, Jigger J. Jerusalem and Vincent Cabreza