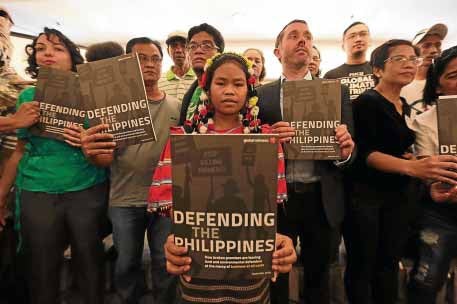 WITNESS TO IMPUNITY Activists and “lumad” representatives present the report of Global Witness, an international watchdog, on the Philippine situation at a news briefing in Quezon City on Tuesday. —GRIG C. MONTEGRANDE

MANILA, Philippines — Murders of environmental activists and land defenders in the Philippines have risen sharply under President Rodrigo Duterte, an international rights watchdog said on Tuesday, alleging his speeches and policies have “emboldened” the killers.

Campaigners who challenge powerful logging, mining and fruit growing interests have long faced deadly violence in the country, but the recent increase marked a “disturbing” jump, according to a report from Global Witness.

In July, the group said 30 killings last year made the Philippines the deadliest country in the world for land defenders, a first since the group began reporting such deaths in 2012.

In an 86-page report released on Tuesday at a press briefing in Quezon City, Global Witness said the toll was at least 113 since the President assumed office in mid-2016, while no fewer than 65 were killed in the three years before his rule.

The group said the government had failed to protect its citizens who made a stand against coal, agribusiness, mining and tourism projects.

Ben Leather, Global Witness’ senior campaigner, said that when the President came to power, he promised to eliminate corruption, to protect the environment and to safeguard marginalized groups, such as indigenous communities.

“Our new investigation could not be clearer—Duterte’s government has failed enormously on all three promises, and has left land and environmental defenders to be attacked with impunity,” Leather said.

Presidential spokesperson Salvador Panelo said it was wrong to make generalizations about the motives or reasons behind the murders of the activists.

“I do not think so,” Panelo said when asked to comment if he thought the President’s speeches may have been a factor in the rise in the killings of environment and land activists.

“You know when somebody dies, we have to investigate whether or not what concerns or whatever advocacies he has or that is a personal thing. We cannot just generalize,” he added.

The Global Witness report follows its July 2018 report that named the Philippines as among the world’s deadliest country for land and environment defenders.

“If the Filipino government is going to deliver on its promises, it has to protect land and environmental defenders and stand up to big business and corrupt politicians,” Leather said.

The administration has been marked by the President’s internationally condemned antidrug campaign that authorities say has resulted in more than 5,500 dealers or users being gunned down by police.

Rights groups say the true toll is at least four times as high.

“The President’s brutal ‘war on drugs’ has fostered a culture of impunity and fear, emboldening the politically and economically powerful to use violence,” the report added.

It cited a series of killings carried out since he won a landslide election victory on his promise to fight crime and corruption.

In 2017, a member of an environmental watchdog group was shot dead while attempting to confiscate illegally cut timber destined for boutique hotels being built amid a tourist boom on Palawan Island, known as the country’s last ecological frontier, the report said.

The victim was the 12th member of the group to be killed since 2004, it added.

A community leader in Mindanao was shot dead in a 2016 ambush after speaking out against a mining project run by a company headed by a businessman who was an election campaign donor for the President, Global Witness said.

It said it also investigated cases of ranchers growing pineapples and bananas for fruit multinationals on land claimed by tribesmen, one of whom was killed allegedly by security guards of a Del Monte Philippines contract grower in 2017.

In 2016, security guards of another rancher who grows bananas for Dole Philippines destroyed the houses of tribesmen claiming the land, uprooted their crops and chased them off the property with gunshots, the report said.

Continuing to do business with these ranchers “makes both companies complicit with the violations,” Leather said.

In a statement, Del Monte Philippines denied the report’s allegations, adding that it “vigorously promotes the welfare of stakeholders across its global supply chain.”

Dole Philippines, controlled by Japan’s Itochu Corp, did not immediately reply to a request for comment.

The report also took to task the National Commission on Indigenous Peoples (NCIP) for its “mixed and inadequate response” to the complaints of tribal communities displaced by business projects.

It urged the government to launch an “independent” investigation into allegations of corruption and malpractice in the NCIP, publish a national human rights action plan and appoint a corporate accountability czar. —With reports from AFP and Julie M. Aurelio