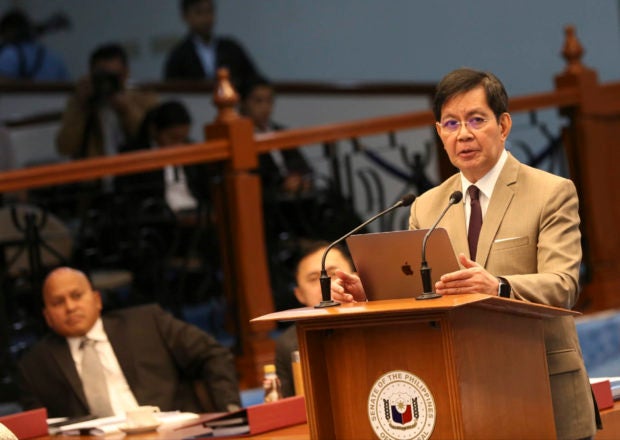 MANILA, Philippines — The House of Representatives has abandoned its supposed attempt to allot P1.5 billion “in pork” for each of the 22 deputy speakers and at least P700 million for every district representative, Sen. Panfilo Lacson said Tuesday.

Lacson reported the House setback as leaders of the chamber challenged the senator to name his informants and to stop releasing unverified information concerning pork.

They also expressed dismay at Lacson for “raining on their parade” after the swift approval of the 2020 budget.

Majority Leader Martin Romualdez on Monday said he was shocked and saddened by the accusations of the senator, who cited information from unidentified lawmakers.

“I am not saying ‘do not rain on our parade,’ but we performed our jobs so that our very honorable senators would have sufficient and ample time to do their duties [to pass the budget],” the Leyte lawmaker said at a press briefing.

According to Lacson, the plan of House members to stash pork allotments in the P4.1-trillion spending program for 2020 fizzled out even before he spoke about it on Monday.

“It did not push through, not because I mentioned it,” he told reporters.

“Even before I talked to you [on Monday], they decided not to push through with it … But I was not aware that they dropped [the plan]. I just found about it moments ago when I checked with my sources what really happened,” he said.

Lacson, whose objection against the pork barrel system has become his personal crusade, claimed that the alleged plan to insert pork happened when Camarines Sur Rep. Luis Raymund Villafuerte Jr. asked for the withdrawal of the General Appropriations Bill after the plenary had approved it on third and final reading.

Villafuerte, the deputy speaker for finance, made the move upon the order of Speaker Alan Peter Cayetano on Aug. 28.

“You cannot do that here (in the Senate). This is worse than what happened last year [when] the budget measure was approved on second reading during the time of [then Speaker Pantaleon] Alvarez,” Lacson said.

He said that when there was a change in the House leadership last year, the approval on second reading was withdrawn. “That was when the amendments were made, including the P75 billion [in pork].”

Sen. Christopher Lawrence “Bong” Go said he would join his colleagues in ensuring that next year’s national budget would be free of pork.

“I’m not in favor of pork. As a neophyte senator, I want [the budget] to be cholesterol-free,” Go said.

“For me, what’s important is that the funds would go to the people and the services that the public needs,” he stressed.

Senate Minority Leader Franklin Drilon and fellow opposition Sen. Risa Hontiveros said they would remain vigilant in closely scrutinizing the budget measure that the House would transmit to the Senate.

“I’m sure with the sustained leadership of Senator Lacson, guarding against pork in the [budget] will not lack a champion in the Senate,” Hontiveros said.

Presidential spokesperson Salvador Panelo, meanwhile, said President Duterte would scrutinize and veto any unconstitutional item in the P4.1-trillion proposed 2020 national budget, amid allegations that it included pork insertions for congressmen.

Pork, a source of kickbacks, refers to all forms of discretionary and lump-sum items in the national budget allocated to lawmakers for their pet projects.

The House passed the spending measure by a vote of 257-6 on Friday night, two weeks ahead of the original October target, as the chamber’s leaders sought to prevent a repeat of the prolonged delay that marred the enactment of the 2019 budget.

Passage of the current budget was delayed by more than four months after the House, Senate and the Cabinet traded accusations of making pork insertions in the bill, forcing the government to operate on a reenacted budget.

The spending measure was signed into law only in April, but the President vetoed P95.3 billion worth of projects inserted by lawmakers.

Castro said Lacson should stop giving his opinion and remember interparliamentary courtesy, noting that the senator had not even scrutinized even one line of the the appropriations bill.

Senior Deputy Majority Leader Jesus Crispin Remulla said the House would not be drawn into a tit for tat with the Senate over Lacson’s statements.

Remulla said the current House leadership, unlike the previous one, had no interest in a war of words with senators on pork allegations, noting how a feud between the two chambers delayed the passage of the current budget for more than four months.

In a statement on Tuesday, one of the 22 deputy speakers, Rep. Eddie Villanueva of the anticorruption Cibac party list, denied Lacson’s allegations.

“As far as I am concerned, as deputy speaker for good governance and moral uprightness, with due respect to Senator Lacson, his allegation of the said alleged plan to give all House deputies P1.5 billion each is a big, big LIE!” the founder of the Jesus is Lord movement said. —With a report from Julie M. Aurelio