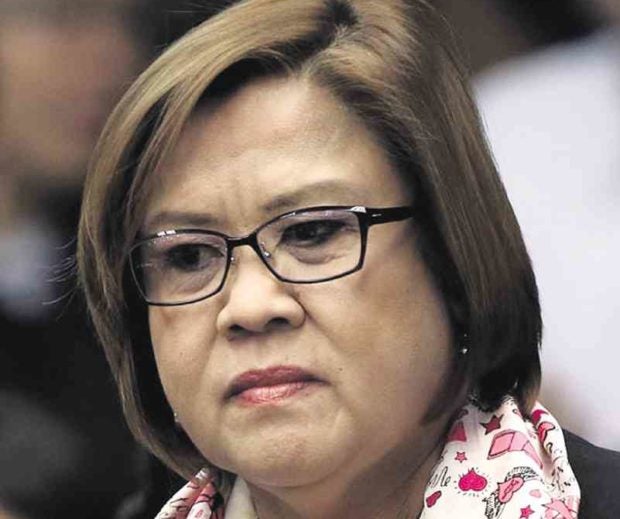 MANILA,Philippines — “Why is the House of Representatives allowing this so-called tradition of ‘courtesy’ to prevail over public scrutiny?”

Senator Leila de Lima raised this question on Wednesday following the House of appropriations committee’s approval of the proposed P4.5-billion budget for the Office of the President’s Confidential, Intelligence and Extraordinary (CIE) funds out of “traditional courtesy.”

READ: Office of the President’s P8.2 B 2020 budget gets swift House OK

“Where in the Constitution does it state that Congress cannot exercise its oversight function over the Intelligence Funds of the President?” De Lima said in a statement.

“Considering how bloated the budget is, all the more the President has to justify this amount,” she added.

The senator argued that legislators cannot simply justify the approval of a budget through “traditional courtesy,” adding that they have a responsibility to safeguard public interest against “abusive and anomalous” practices.

“We cannot just cite tradition on a whim that scrutinizing delicate funding, such as the CIE of the Office of the President, can be foregone, especially with the limiting accountability features for these budgets,” De Lima added.

De Lima also noted that the proposed budget is “way too much for an office,” as she described it as “suspicious.”

“This is way too much for an office, which already has direct control over institutions that are mandated to gather information in relation to national security,” De Lima said.

“There is no sense for an executive office to ask for the highest confidential and intelligence funding than any other security and law enforcement agency in the government,” the senator further noted.

Further, she questioned how the funds will be used by the Office of the President, claiming that “intel funds under President Duterte has only resulted in rubbish matrices, with the sole purpose of harassing or persecuting critics and dissenters.”

“The continuing attacks and fabricated accusations in the past three years against the opposition, myself included, casts a shadow of doubt on how the President would use this budget,” De Lima said.

De Lima then called the Congress to further scrutinise the hefty amount proposed by the President’s office.

“The failure to have the President justify these budgets is also the failure to respond to the clamor for accountability from the people. National interest and public trust are at stake here,” she added. /jpv