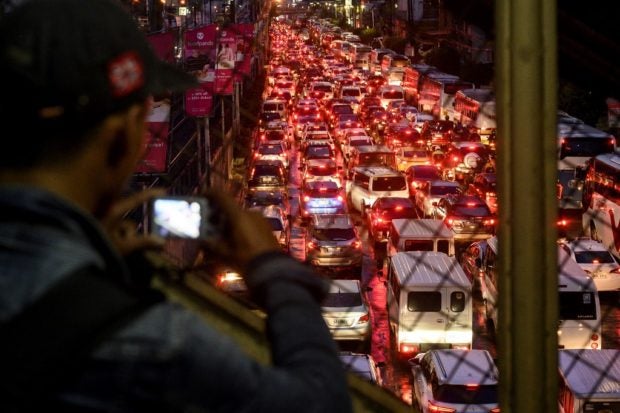 This photo, taken on Aug. 9, 2019, shows heavy traffic during rush hour along the EDSA in Metro Manila.  Gridlock is costing lives as ambulances stuck in traffic face severe delays in the race against the clock to reach the city’s hospitals, medics warn. (Photo by NOEL CELIS / AFP)

MANILA, Philippines — President Rodrigo Duterte on said Tuesday that he would order the Metropolitan Manila Development Authority (MMDA) and Philippine National Police-Highway Patrol Group (PNP-HPG) to escort ambulances after reports came out that some patients had died due to heavy traffic in Metro Manila.

“Maybe that will be a mandatory work for them,” the President said.

Earlier, the President said he would need emergency powers so he could have funds for projects that would solve traffic in Metro Manila, particularly on Edsa.

But he seemed to be fed up with trying to solve the traffic congestion in Metro Manila, saying that without him having emergency powers: “Let Edsa rot there.”

Meanwhile, Malacañang suggested the use of helicopters for faster transportation of patients during emergencies.

“[P]erhaps they can use choppers for an emergency flight,” presidential spokesman Salvador Panelo said in a Palace briefing

Asked if the government had enough choppers, he said: “Well, we can always utilize the AFP with respect to choppers.”