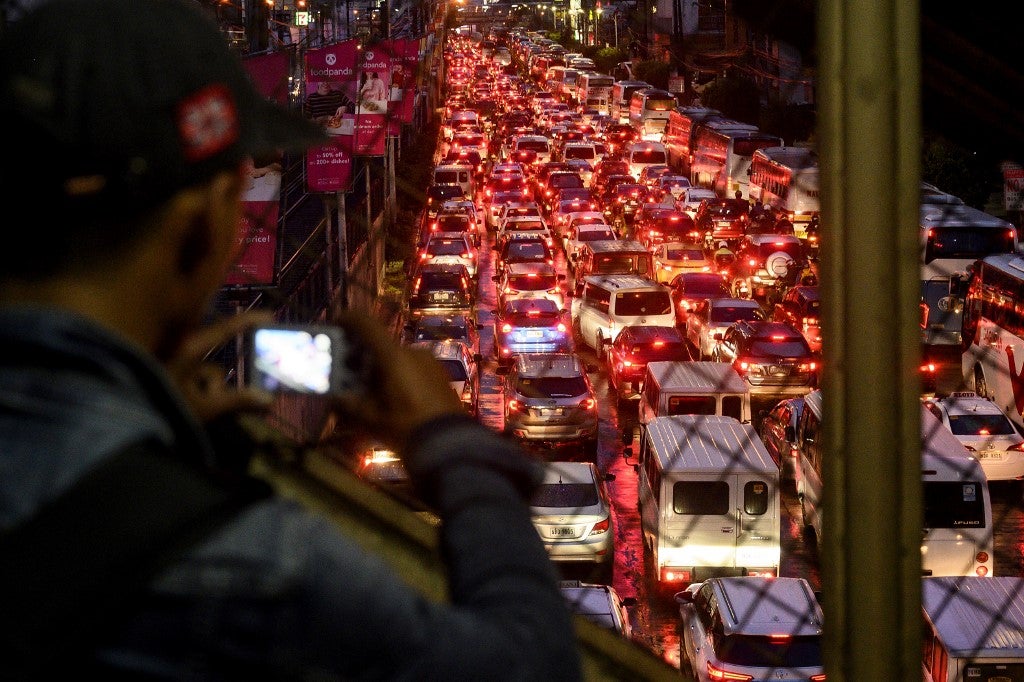 This photo taken on August 9, 2019 shows heavy traffic during rush hour along the EDSA highway in Manila. (Photo by NOEL CELIS / AFP)

MANILA, Philippines — Gridlock in Manila is costing lives as ambulances stuck in traffic face severe delays in the race against the clock to reach the city’s hospitals, medics warn.

Special lanes for emergency vehicles are not enforced, the infrastructure is outdated, and local drivers are often unwilling or unable to make way  a situation experts say is causing patients to die en route.

“You feel empty. It is as if you were not given a chance to do everything in your capacity to help,” ambulance driver and paramedic Joseph Laylo told AFP.

“If the traffic was not that bad it could have saved the patient,” he added, recalling how he lost a patient when congestion tripled the time to hospital.

Even with an encyclopedic knowledge of short cuts or aggressive driving such as blasting their horns or bumping unyielding vehicles, it is not always enough to arrive in time. 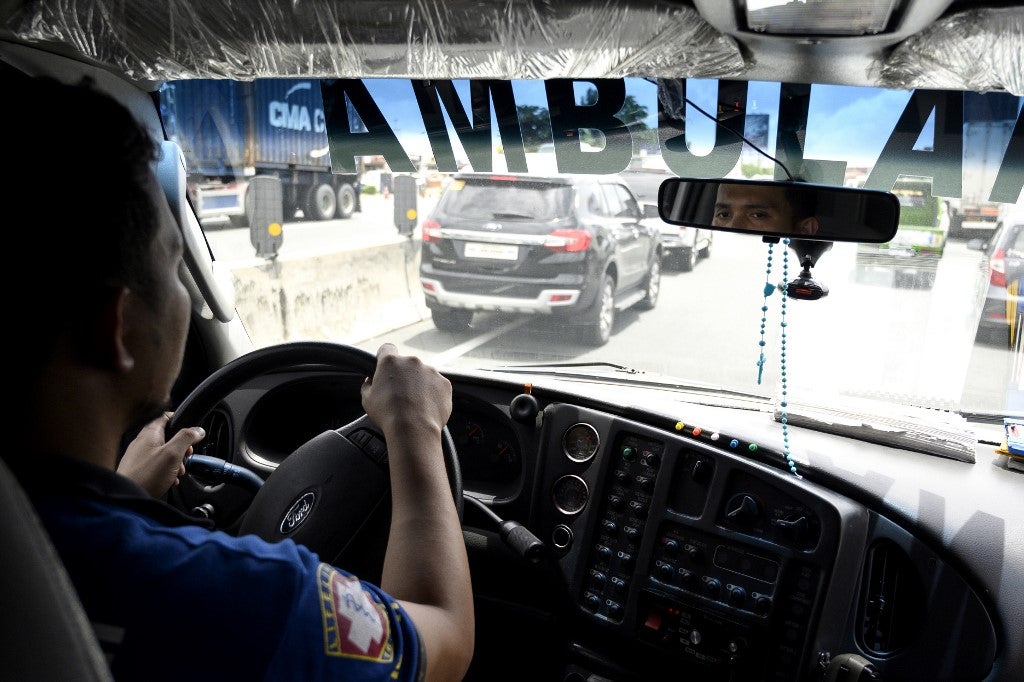 Driver Adriel Aragon is still haunted after losing a critically ill patient when it took 40 minutes to reach the hospital  the journey should have taken half that time.

“No matter how hard we honk, even if we use our siren, if the vehicles are not moving it doesn’t matter,” he said.

“That’s what happened that time,” Aragon added of the 2014 tragedy.

Five minutes before they reached the hospital the woman’s pulse disappeared. She was pronounced dead after they wheeled her into the emergency room.

At peak hours, the main arteries of Manila are clogged with idling cars a 25 kilometer end to end drive through the main highway can take as long as three hours.

Home to some 13 million, there is nearly one vehicle registered per person. The resulting gridlock costs the city $67 million daily in lost productivity, according to a 2017 Japanese government-funded study.

Neither the government nor ambulance companies keep count of how many patients die in traffic each year, officials said, but emergency medical workers in the city have many horror stories.

Laylo says one patient died inside his ambulance after heavy traffic on a narrow road added 10 minutes to the journey from the patient’s home to the hospital. 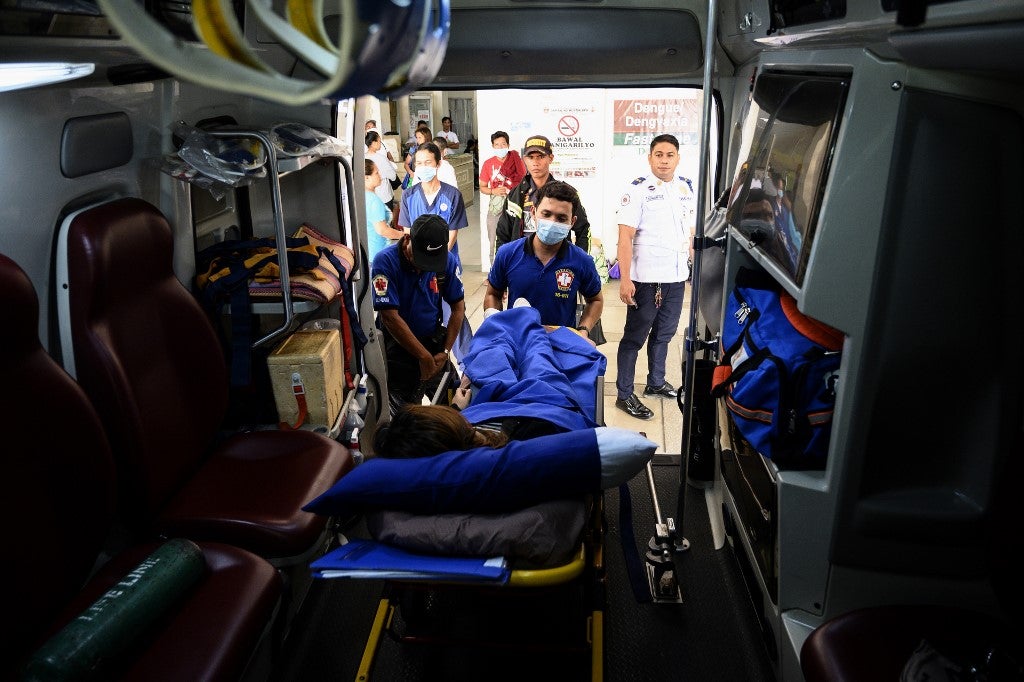 This photo taken on July 18, 2019 shows first responders loading a patient into their ambulance at a bus station near Manila.  (Photo by NOEL CELIS / AFP)

“It was about 5.7 kilometers. Normally it would take us less than five minutes, but it took us 15 minutes that time,” Laylo explained.

“When you’re trying to save a person’s life, that is very slow,” he said, still upset by the 2017 incident.

Images of ambulances stalled in unmoving traffic jams have sparked outrage on social media in the Philippines.

One of the most notorious examples  which has been viewed over 3.2 million times online  was filmed by a woman shocked that cars wouldn’t or couldn’t give way to the ambulance carrying her mother.

“I was very angry. I was worried too because we couldn’t do anything about the vehicles blocking our lane,” the woman, Jing Zamora, told AFP.

The trip took hours, when it should have taken minutes. Zamora’s mother, who suffered a stroke, survived the trip to the hospital but died there a week later.

A swift medical response is key to recovery, according to the American Stroke Association.

Officials like Aldo Mayor, public safety chief of the Metropolitan Manila Development Authority (MMDA), put at least part of the blame on other road users.

“Some people simply do not care. It is as if they are the only residents of this world,” said Mayor, whose government agency manages the capital’s chaotic traffic. 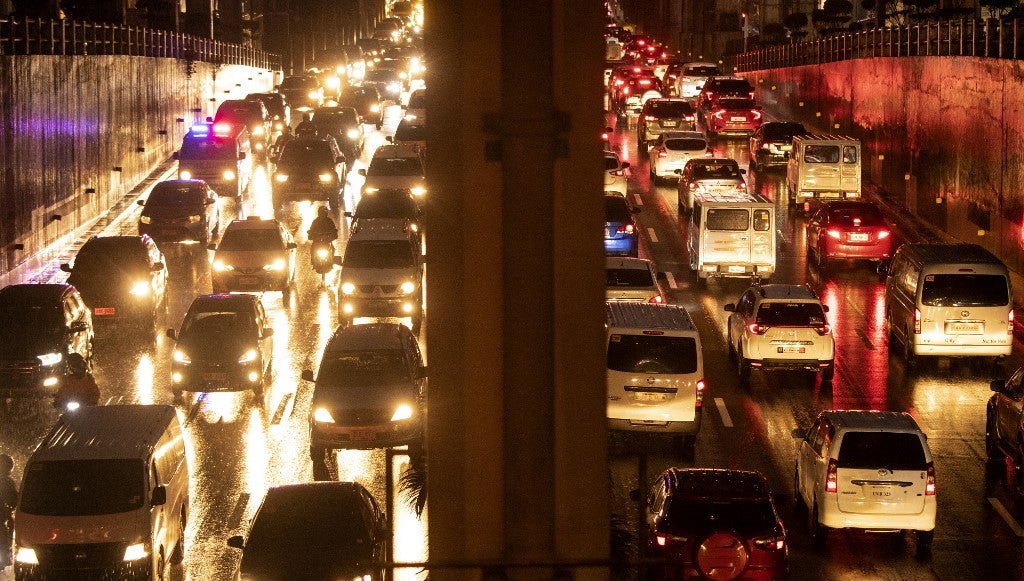 This photo taken on August 5, 2019 shows an ambulance negotiating through rush hour traffic along the EDSA highway in Manila. (Photo by NOEL CELIS / AFP)

He added that Manila ordinances concerning emergency vehicles, including a 2017 regulation that reserves one lane for them, are rarely enforced due to personnel constraints.

These problems come as Manila’s population has roughly doubled since 1985 and its infrastructure has not kept up.

Its limited system of commuter rail is augmented by jeepney minibuses and millions of cars.

The nation’s thicket of bureaucracy and deep rooted corruption have stalled or blocked efforts to build new roads, bridges and public transit.

The sheer number of cars on the roads is a major factor in whether ambulances can get their patients to hospital quickly, said Vernon Sarne, a longtime automotive journalist. 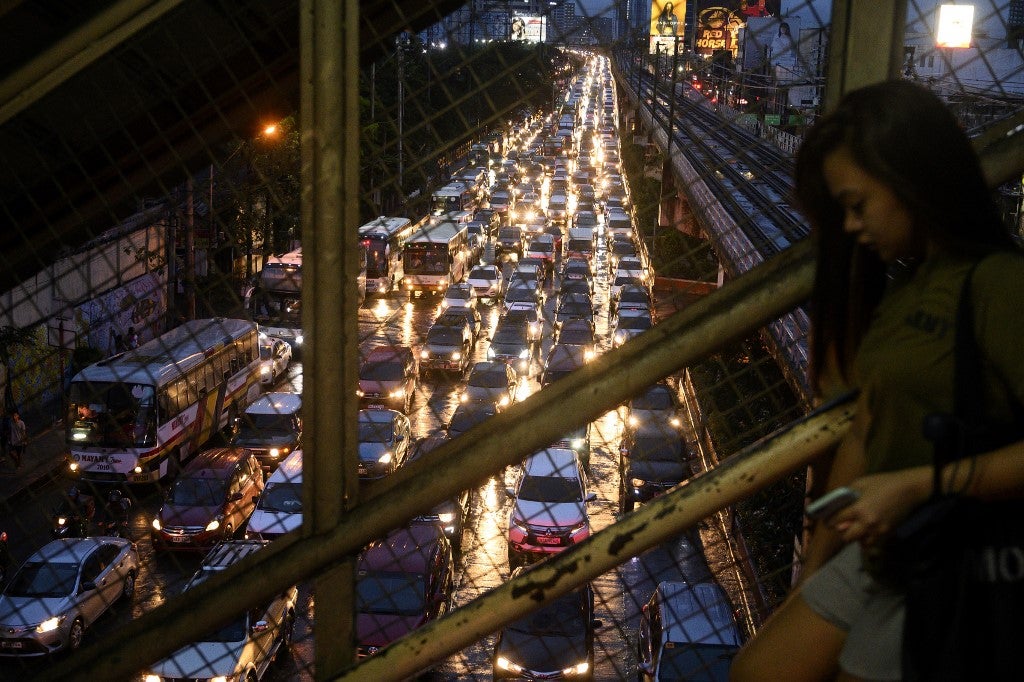 This photo taken on August 9, 2019 shows heavy traffic during rush hour along the EDSA highway in Manila.  (Photo by NOEL CELIS / AFP)

“Even when you want to give way, but the motorway is full, what can we do? The ambulance cannot levitate,” he told AFP.

However Sarne noted that drivers have become cynical, thinking ambulances might be using their lights and sirens just to cut through the traffic for nonemergencies.

“As a motoring public we are jaded to the fact that everyone is taking advantage of us,” he said, adding some politicians use emergency vehicles escorts to avoid the gridlock.

“Because of social media, we found more and more people are giving way, giving (us) the benefit of the doubt,” Michael Deakin, the head of one of the nation’s largest ambulance companies told AFP.