De Lima on order to explain GCTA mess: ‘Is this a set-up for me?’ 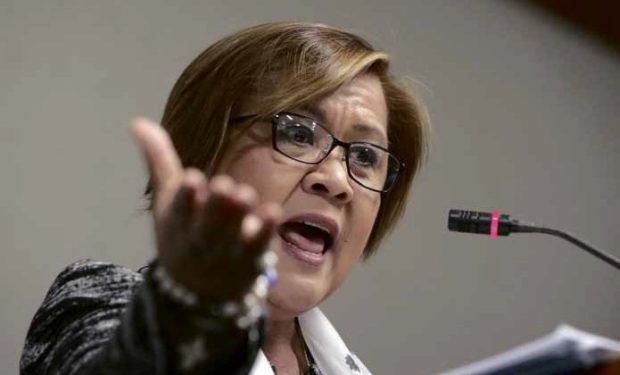 MANILA, Philippines — “Is this a set-up for me and [Interior] Sec. Mar [Roxas] into taking the fall for the Sanchez-Faeldon scandal with which we have nothing to do?”

This was the question posed by Sen. Leila De Lima on Tuesday after the Office of the Ombudsman ordered her and former Interior Secretary Mar Roxas II to explain the non-inclusion of heinous crime convicts in the good conduct time allowance (GCTA) law’s Implementing Rules and Regulations (IRR).

In a statement, De Lima confirmed that she had received the letter of the Ombudsman directing her to explain or clarify, the IRR of the GCTA Law.

“The letter says that the Office of the Ombudsman has ‘opened a fact-finding investigation on alleged irregularities in the implementation of’ the GCTA Law. Am I to be treated here as a resource person, a respondent, or a probable respondent?” De Lima asked.

De Lima called the development as “irregular” and said that she would consult her lawyers first regarding the matter.

But Section 3 of the law’s IRR states that those disqualified from availing GCTA are “an accused who is a recidivist,” “an accused who has been convicted previously twice or more than times of any crime,” and “an accused who, upon being summoned for the execution of his sentence, has failed to surrender voluntarily before a law of court.”

The GCTA law was signed by then President Benigno Aquino III, with De Lima serving as justice secretary and Roxas as interior secretary.

The law assigned the task of crafting its IRR to the justice secretary and the interior secretary.

The issue broke out and caused public outrage after convicted rapist and murderer Antonio Sanchez was reported to be up for early release under the controversial law.