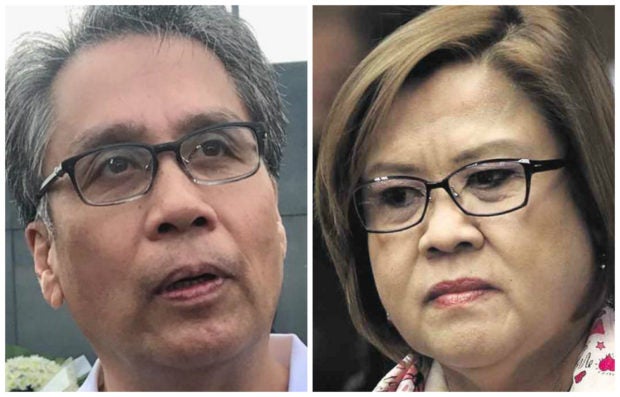 MANILA, Philippines — The Office of the Ombudsman has sought the “explanation/clarification” of former Interior Secretary Mar Roxas II and Senator Leila de Lima on the non-exclusion of heinous crime convicts in the good conduct time allowance (GCTA) law’s Implementing Rules and Regulations (IRR).

In a letter dated September 6, the Ombudsman asked Roxas and De Lima to submit in writing their respective justification on why the IRR does not disqualify heinous crime convicts despite being clearly detailed in Article 29 of the Revised Penal Code, as amended by Republic Act 10592.

Under RA 10592 signed by President Benigno S. Aquino III, “recidivists, habitual delinquents, escapees, and persons charged with heinous crimes” are excluded from availing GCTA. But Section 3 of the law’s IRR states that those disqualified from availing GCTA are “an accused who is a recidivist”, “an accused who has been convicted previously twice or more than times of any crime”, and “an accused who, upon being summoned for the execution of his sentence, has failed to surrender voluntarily before a law of court.”

Roxas was Interior Secretary while De Lima was Justice Secretary during the administration of Aquino.

“In this regard, the Office requests the submission, within three days of receipt hereof, of a written explanation/clarification on why the foregoing provision in the IRR does not contain the same disqualifications as enumerated in the last paragraph of Article 29 of the Revised Penal Code, as amended by Section 1 of R.A. 10592,” said the letter signed by Ombudsman Samuel Martires.

Controversies on the implementation of the GCTA law exploded after news of the impending release of convicted rapist-murderer former Calauan Mayor Antonio Sanchez broke out last month. Sanchez, who was found guilty in the rape-slay of UP Los Baños student Eileen Sarmenta and the murder of her friend Allan Gomez, was supposedly due for release because of good behavior while inside the prison.

Public outrage has caused the aborted release of Sanchez, who was sentenced to seven life terms or 280 years of imprisonment for the Sarmenta-Gomez case and another two life terms or 80 years for the murders of two other individuals.

A Senate inquiry was then called to look into the circumstances of Sanchez’s release as well as the implementation of the GCTA law. This investigation has since opened a can of worms as it revealed that nearly 2,000 heinous crime convicts have already been released because of good behavior and that early freedom due to GCTA can be availed for a fee. It also exposed alleged various schemes of corruption at the Bureau of Corrections and New Bilibid Prison. Gabriel Pabico Lalu, INQUIRER.net   /kga

Inmate bares corruption in Bilibid: Mobile phones, TVs go in for a fee

DOJ: NBI to probe, do case build-up on ‘hospital referral pass for sale’ at NBP