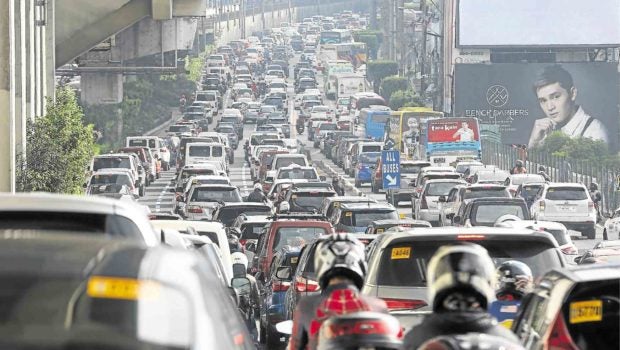 MANILA, Philippines — President Rodrigo Duterte seems to be fed up with trying to solve the monstrous traffic congestion in Metro Manila, saying that without him having emergency powers: “Let Edsa rot there.”

In a speech on Wednesday at the inauguration of a solar power project in Romblon, the President blamed a lady politician, whom he did not identify, for the traffic jam on Edsa.

Though he did not name the lady, the President had earlier criticized Sen. Grace Poe for saying that the funds he planned to ask Congress to ease traffic in Metro Manila could be lost to corruption.

“Si [Transportation Secretary Arthur] Tugade, sabi: ‘We need to borrow for EDSA, because we need money to move just one stall there’,” the President said. “Ang hinihingi nila emergency powers.”

Poe, who is on her second term as senator, chairs the Senate Committee on Public Services, which tackles traffic and transportation issues.

The President earlier said he needed emergency powers to have funds for projects that would solve traffic in Metro Manila, particularly on Edsa.

“So look at Edsa. Until now, I cannot do anything. But never did I ask [for] money without any bidding,” he earlier said.