MARSH HARBOUR, Bahamas – U.S. emergency workers on Monday found five bodies in the debris left by Hurricane Dorian in the Bahamas, and they said they expected to find more victims a week after the devastating storm hit. 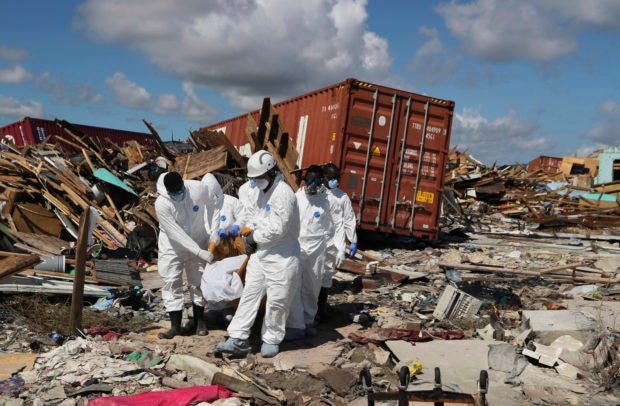 A Bahamas coroners team carries a body out of The Mudd neighborhood in the Marsh Harbor area of Abaco Island in the Bahamas in the aftermath of Hurricane Dorian, Monday, Sept. 9, 2019. Dorian, the most powerful hurricane in the northwestern Bahamas’ recorded history, has killed at least 44 people in Bahamas as of Sunday, Sept. 8, according to the government. (AP Photo/Fernando Llano)

Bahamians, meanwhile, were also searching the rubble, salvaging the few heirlooms left intact by the Category 5 storm that, according to the official count over the weekend, has killed at least 44 people.

Members of the Gainesville, Florida, fire department were operating in the remains of The Mudd, the Bahamas’ largest Haitian immigrant community.

“We’ve probably hit at most one-tenth of this area, and so far we found five human remains,” said Joseph Hillhouse, assistant chief of Gainesville Fire Rescue. “I would say based off of our sample size, we’re going to see more.”

After the Americans recovered bodies, Bahamas police and medical authorities moved in to conduct autopsies and fly the remains from Abaco island, in the northwest Bahamas, south to the capital, Nassau.

“There are still more bodies,” said Genoise Arnold, a resident of The Mudd who said that at least three neighbors died in the storm.

Arnold said one neighbor clung to a tree during the storm and succumbed to flood waters that surged through the low-lying neighborhood. Others were caught under their homes when winds turned the structures into splinters, leaving the cowering residents exposed, he said.

The huge debris piles left by the storm are challenging for search and recovery teams, which cannot use bulldozers or other heavy equipment to search for the dead. That makes recovery and identification a slow process.

The Bahamas government has announced a telephone hotline where Bahamians can call to report family members who have been missing since the storm.

At least five deaths have been blamed on the storm in the southeastern United States and one in Puerto Rico.

In Rocky Creek, a settlement of a few families on the east end of battered Grand Bahama island, members of the Reckley family picked through what remained of nearly a dozen homes that had been inhabited by their extended family.

The Reckleys and their assorted spouses, children and in-laws lived off the income from three boats they use for fishing and for providing tourist excursions from a pristine beachfront facing the turquoise Caribbean.

The family rode out the storm in nearby government shelters, and returned to find their smashed homes.

The motors of the Reckleys’ boats were also destroyed. The entire extended family together earned about $800 a month, not enough to buy insurance, said Synobia Reckley, 25, who traveled from the island’s main city, Freeport, to help her family.

“It hurt. This is all I know,” Reckley said. “We lost a lot of old pictures. … We don’t have nothing to look back on. It’s just heartbreaking.”

The only aid they have received so far is from foreign aid groups and U.S. firefighters, said Reckley’s husband, Dexter Edwards, a heavy equipment operator.

“Right now, ain’t much joy. You just gotta try to keep your head up,” Edwards said. “There’s always a future. Only thing we can do right now is rebuild — rebuild and try to move forward.” /gsg