PHOENIX  – The Trump administration said Monday it saw a 30% drop in the number of people apprehended at the southern U.S. border from July to August, amid an aggressive crackdown by the Mexican government on migrants traveling north. 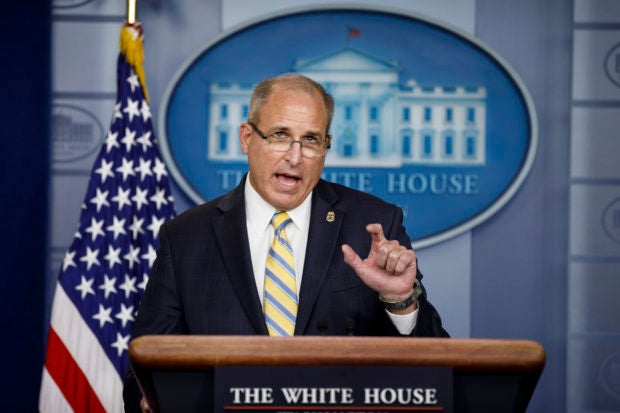 Acting Customs and Border Protection Commissioner Mark Morgan said at the White House that the percentage of border crossers who are traveling as families also slid, a welcome change for U.S. authorities who claim adults bring children to the U.S. because the government can’t detain them for as long. Migrants traveling in families and unaccompanied children accounted for 57% of border arrests in August, down from 67% in July and 72% in May.

Morgan credited President Donald Trump’s efforts to reduce immigration as well as the Mexican government’s clampdown on migrants traveling north, which it says resulted in a 56% reduction in three months. He said the drop has “nothing to do” with seasonal trends in which fewer migrants cross during the hot summer months.

“We are absolutely encouraged by the downward trend of apprehension numbers but we know these numbers can always spike upwards,” he said. “History has shown that. We’ve seen it happen in the past.”

The Border Patrol apprehended just over 50,600 people at the southern border in August, compared to nearly 72,000 in July and over 132,000 in May, at the peak of illegal border crossings. Authorities at official ports of entries also turned away 13,300 people in August, an increase from the 10,000 turned back in July. There are about 19,000 people waiting in Mexico to formally request asylum in the U.S.

Randy Capps, director of research at the Migration Policy Institute, said while the number of apprehensions has dropped, it’s still high compared to August in other years. He said the spike the U.S. saw in the spring isn’t necessarily tied to the weather but to chaos at the border.

“The smugglers know when there’s chaos they have a lot more options. They can lower prices or make better guarantees,” Capps said.

A majority of immigrants coming to the U.S. are Central American families who turn themselves in after crossing the border and are fleeing violence and poverty. Many seek asylum.

Yuma, Arizona, saw a dramatic spike in the number of families and unaccompanied children coming to the border over the past two years, making it the third-busiest sector in the Southwest. So far this year, the Yuma sector has seen over 51,000 family units. That’s compared to just over 10,700 the year before— a 316% increase.

In June, border officials announced they’d built a temporary, 500-person capacity tent facility in the back parking lot of the Border Patrol’s Yuma headquarters. The agency spent just under $15 million for the setup and services for four months, including meals, laundry and security.

But the number of arrivals there has fallen sharply, and officials are evaluating whether to keep the facility running after the four-month contract expires next month.

The administration has depended on Mexico for its “Remain in Mexico” program, which sends asylum-seekers back to Mexico to wait for U.S. court hearings.

Morgan on Monday said the U.S. has returned 42,000 asylum-seekers since the program began earlier this year but didn’t confirm reports that many had been kidnapped , robbed or fallen victim to extortion in Mexico. Homicides in Mexico have soared to nearly 35,000 last year, an increase from the peak of the 2011 cartel violence that left 27,000 dead.

Morgan said the Trump administration cannot rely on Mexico and Central American governments to address what he called a “crisis.” He urged Congress to act on the administration’s agenda, which includes curbing or eliminating protections for asylum-seeking families and children. The U.S. also has been pushing Guatemala and other countries to accept asylum-seekers heading to the U.S. /gsg