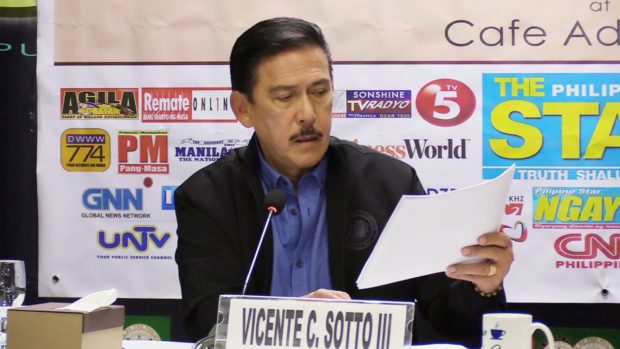 MANILA, Philippines — Senate President Vicente Sotto III bared that he has a photo to prove that convicted rapist and murderer Antonio Sanchez is wearing women’s clothes inside the National Bilibid Prison in Muntinlupa.

Sotto later clarified that he has yet to confirm whether his co-senator was joking on the “second chance” remark.

Sotto then reiterated his call to review the law, citing that he already filed a resolution to look into the implementation of the said law that provides the good conduct time allowance (GCTA) to prisoners.

The GCTA gives additional time to be deducted from an inmate’s prison sentence as a reward for their good behavior.

Just days later, the Department of Justice (DOJ) and Bureau of Corrections said that the former Calauan, Laguna mayor was not eligible for the benefits of the law and will not be freed soon.

Sanchez was meted with seven terms of reclusion perpetua (up to 40 years imprisonment) for the rape and murder of Sarmenta and the killing of Gomez.

Sanchez’s security men, who were witnesses, testified that after the former mayor raped the student, Sarmenta was turned over to Sanchez’s guards who gang raped her. /jpv